The Foreign Investment Review Act, hailed as an instrument to strengthen the ability of Canadians to shape their own destiny when it was passed four years ago, is falling apart in the face of corporate obstinacy and government indifference. Critics charge that under the direction of T rade Minister Jean Chrétien, an anti-nationalist, the Foreign Investment Review Agency (FIRA) set up by the act has become little more than a welcome wagon for foreign investors. Now, Maclean’s has learned beyond question that FIRA and the government are even turning their backs on possible violations of the act and, in the process, making a mockery of parliament’s intentions. For example:

the giant parcel delivery firm, applied for and was refused permission by FIRA and the government two years ago to take over Delivro (Canada) Inc., a competitor operating in Ontario and Quebec. The rejection of the take-over bid followed representations from the Post Office and CN and CP Express, all of whom viewed UPS as a dangerous competitor, and from the governments of Ontario and Quebec. There was concern that UPS, whose American parent has been convicted of monopolistic activity in the United States, was setting out to swallow its competition. The take-over, however, has gone ahead anyway, conditional on the transfer of Delivro’s licenses to UPS. Gorse Howarth, commissioner of FIRA, says the take-over is now out of his hands because the purchase price is less

than $250,000, the threshold that determines whether a transaction should be screened by the agency. But UPS’S competitors say the American-owned company loaned a substantial sum to Delivro before purchasing the firm, thereby bringing the price, originally set at $500,000, below the threshold, UPS president Glen Smith acknowledges the loan was made, but will not disclose the amount. Says Smith: “My experience with talking is that sometimes it comes back to haunt you.” Howarth is aware the loan was made, but says it makes no difference to FIRA. “I don’t know if UPS is contravening the spirit of the law. All I know is what the threshold is.”

• In 1975, N. V. Indivers, a Dutch firm, took over Vac-Hyde Processing Corp., an American company. Simultaneously, Indivers acquired control of Vac-Hyde’s Canadian subsidiary, a successful firm based in Oakville, Ont., and involved in the business of treating metal for aerospace purposes. The governments of Ontario and Quebec vehemently opposed the takeover of the Canadian subsidiary, as did the federal Department of Industry, Trade and Commerce, which was considering making a grant to Canadian Vac-Hyde. Accordingly, last May, FIRA and the government disallowed the take-over. Because the transaction had already taken place, however, the government’s decision meant that Indivers had to divest itself of Canadian Vac-Hyde. That was 14 months ago. Indivers still owns Canadian VacHyde after several attempts to sell it, and the government, which could take the Dutch company to court to force divestment, seems paralyzed. Howarth calls it “one of the most difficult cases” he has faced at FIRA and says he is still considering court action. Said Indivers president Bert Twaalfhoven after a meeting with FIRA officials: “If they go to court, let’s see what happens.” He did not sound too concerned.

• In 1975, Marks and Spencer, a Britishowned department store chain, was allowed by FIRA and the government to take over Peoples Department Stores, a Canadian chain. But the government deci-

sion was conditional on Marks and Spencer’s promises to open 14 new stores and provide 550 newjobs by the end of 1976. In fact, caught in an economic slowdown, Marks and Spencer opened just 10 new stores, closed four others previously run by Peoples and ended up with a net loss of 716 jobs by the end of 1976. Instead of going to court to force Marks and Spencer to live up to its promises or sell off its holdings, FIRA and the government simply rewrote the agreement with the British company to set conditions it considered more reasonable.

The government argues that the new conditions are just as good as, if not better than, the old ones but refuses to make them public, although it has the authority to do so under the legislation.

• Last year, Canadian General Electric (CGE) and General Steel Wares (GSW) announced the merger of their appliance divisions to form a new company, the Canadian Appliance Manufacturing Co. (Cameo). In turn, Cameo took over the appliance division of Westinghouse Canada Ltd. Such a massive transaction, involving both Canadian and American firms, would automatically be screened by FIRA in normal circumstances. But Chrétien, the minister responsible, was under enormous pressure from CGE and GSW to let the three-way merger stand without FIRA’S scrutiny. He consented, and argued that CGE and GSW had promised 400 new jobs and investments totaling $50 million if the merger were allowed to stand. But, because the government failed to follow the normal procedure under the Foreign Investment Review Act, these promises have no force in law.

These are just four cases that have come to Maclean’s attention. There is every reason to believe there are many other similar

cases and agency morale is plummeting in the face of the government’s apparent decision not to take the act seriously. In more than three years of operation, FIRA has never taken anyone to court. The reason, says Bill Wood, FIRA’S director of compliance, is that “we’d make regular asses of ourselves if we rushed into court every time somebody wanted us to.”

The real reason, at least recently, is more likely the indifference, or even hostility, of Chrétien toward the Foreign Investment Review Act. He is on record as deploring economic nationalism and says he is more interested in providing jobs. He told a Chicago audience that “a continuing inflow of direct investment from abroad is an essential condition of continuing economic progress” in Canada. To ensure that foreign investors are not discouraged by FIRA. Chrétien has speeded up the screening process considerably, especially for transactions below two million dollars. He has also approved more than 80% of the foreign investment proposals to come before him since he became the responsible minister last September 14. (See box), FIRA, he says, “is not intended to block such investments or to discourage them.”

Says Herb Gray, the former minister and current backbench MP who was the chief architect of FIRA: “This is not exactly what the act says. The wording .. . clearly states that parliament believed that the level of foreign investment was at so high a level that the matter was one of national concern and, therefore, this level of investment should not be allowed to go higher unless it was proven to be of significant benefit to Canada.” Even in times of economic decline, said Gray, there is no argument for loosening up the application of the act. “It is vital that concern over the economy does not stampede provincial or federal authorities into accepting foreign investment projects on terms that Canadians generally would later regard as not being in the best long-term interests of the country and the region most directly concerned.”

The debate between Chrétien and Gray is ideological. But there are other, nonideological concerns that might explain the government’s reluctance to enforce the act in the face of possible violations. In the UPS and Indivers cases, the government might lose in court on a technicality because FIRA did not, as required by the act, prepare a summary of each case for cabinet before the decision was made to turn down the two take-over bids. George Ainslie, federal assistant deputy attorneygeneral, has advised FIRA that this oversight would probably be fatal in any court case. Howarth brushes aside the importance of the matter, but a summary is now being prepared for cabinet in all FIRA cases.

In the Indivers case, prosecution might also fail in court on the grounds of a possible loophole in the act. The legislation was intended to cover cases where control

of a Canadian company, such as Canadian Vac-Hyde, already foreign-owned, transfers to another foreign company through the sale of the parent firm. But justice department officials have questioned whether the act does, in fact, apply to such cases. Howarth, who is not a lawyer, expresses no concern about the applicability of the act in these cases, but it has, of course, never been tested in court.

In the Marks and Spencer case, the new conditions set down by FIRA may have no legal standing whatsoever because they were not approved by cabinet but by Chrétien alone. Explained a Chrétien spokesman: “The minister goes to cabinet as little as he has to.” Howarth points out that nothing in the Foreign Investment Review Act requires the minister to take a new set of conditions to cabinet for approval. But legal experts point out that there is also nothing in the act that stipulates the minister may approve a new agreement without a reference to cabinet. Howarth expresses confidence the agreement would stand up in court, however. He says Chrétien has the authority to approve such a document and compares it to his own authority to approve the expense accounts of FIRA staffers.

Finally, Chrétien’s legal authority to waive the normal FIRA scrutiny for the Cameo merger is in doubt. Usually, such

action is taken only in response to a formal request from the affected companies for a judgment. The minister is then empowered to respond in writing that the transaction in question is exempt from FIRA scrutiny. No such letter was written in the Cameo case. Chrétien argued that it was unnecessary. But Gray says Chrétien is totally wrong in this case and accuses him of a "dereliction of duty.” Furthermore, says Gray,“he has provided an opportunity for businesses generally to do an end run around FIRA.”

The attitude of the government toward FIRA has not gone unnoticed by foreign investors and commentators. Barron’s, a right-wing business publication in the United States which once savagely attacked FIRA (“a bureaucratic iron curtain”), has changed its view. Now, it says: “The only U.S. business which wouldn’t be cordially welcomed to Canada is Murder, Inc.” The Economist, the influential British weekly, added its own comments last month: “The Foreign Investment Review Act is now being used so loosely that it is not even a sluice gate, let alone a dyke, to foreign investment.” Howarth seems unperturbed by such put-downs of FIRA. Indeed, he boasted before the House of Commons finance committee this year, “We have a good number of... letters from people who have been applicants, and whose cases have been decided, who have expressed some surprise and delight at the way they have been dealt with.” 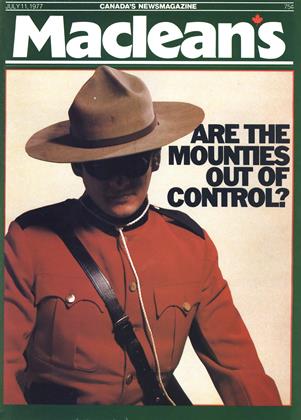