Hugh Hefner has made Playboy bunnies synonymous with American sex, but David Wells, editor-publisher of the girlie magazine Elite, is finding that mice make a more fitting symbol for sex in Canada. It’s not that the country is against sex magazines. Wells finds Canadians are second only to the British in their appetite for them. So when sex rears its mainly imported head, to the tune of some 480,000

each month and even more of Penthouse, the only ones who turn a hair are Cus_ _ toms inspectors. But if Canadians are happy bi-othels to look at other # people’s sex fantasies, m Wells—a “44 years young” former trade *1 magazine entrepreneur—has found it’s another thing entirely to join in.

When Elite went international with its May issue, Wells announced he is pulling all technical aspects of publishing his bimonthly, $1.95 magazine—now 15 issues old—out of Canada. “Only the editing and typesetting will be done in Toronto,” he vows. An American firm distributes the nearly 500,000 copies that appear on the stands and under the counter in six countries, including Canada, which Elite now enters as a foreign publication. It has the distinction of being the only Canadian magazine that must be passed by Customs even though it is written, edited and photographed almost entirely by Canadians.

To compete on the world market, “The Canadian Entertainment Magazine for Men” has had to come out of the soft-core closet. “But look,” Wells exclaims, flipping open a page of air-brushed fuzz that in other magazines is as explicit as Gray’s Anatomy, “we are no raunchier, no heavier than Penthouse. So why should I be made to feel like a pervert? In essence, I’m a very straight dude. I have no circular beds. I live with one lady—for two years now—and have three children.”

Much as Elite’s models have been willing—some have donned wigs and submitted new photos when Wells turned them down—the printing trades have been reluctant. But whether their objections have been moral ones, as Wells claims, is

another matter. “He comes in here a week before he needs the job finished and expects me to put aside a $700,000 order for his piddly $18,000 job!” snorts a printer who did one issue. “Then he blames the Canadian industry.”

Some facilities—including those at Southam and Maclean-Hunter—have been denied him. Others have been provided under a cloud of heavy moral cenMEN MAY «77 |pi .'fü® sure that has led Wells to switch tradesmen with almost every issue. Richardson, Bond and Wright, a major Ontario firm, turned him down because they also print the United Church Observer and Gideon Society Bibles. “But even if we didn’t, we would not be interested,” confirms Ken Cruickshank, the sales manager. “Just call us conscientious objectors.” Another printer, who did accept the job, told Wells, “Okay, but we have to do it at night in case the old Colonel [the owner] comes in. He’d have a bird.”

Wells says it was the same at Toronto’s Empress Litho Plate. “ ‘We’ll do it at night,’ the manager told me, ‘because there are two homosexuals on that shift and they won’t be offended.’ ” (The firm’s manager says he opted for night “because nudity pictures hold up work during the day. But homosexuals? Wells must have meant it as a joke.”)

To Wells, Toronto has a double standard several miles long. “On the Yonge Street strip, you can pick up a nine-yearold or an elephant,” he blusters. “But the attorney general and archbishops say, ‘Down with the pornographers!’ ” So down he went—to New York City, home of his new printer and of infamous Screw magazine, which led off its approving review of Elite's May issue with the words, “This magazine needs help.” Wells chuckles. “To the Americans, Elite is a glass of milk.”

It comes down to a question of skin: the exposure of the girls’, and the thickness of Wells’s. Either way, Elite's is still the only Canadian skin since beaver that’s had to be stamped GOVERNMENT APPROVED before it can cross the border. 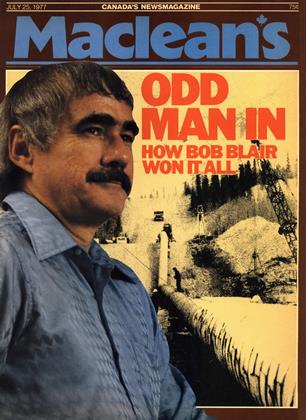