Where have all the outraged gone? Felled by the Seventies, every one SILVER DONALD CAMERON August 22 1977

“The anger of the Sixties was full of hope,” explains Brenda Large, remarkably calm and philosophical for a woman who has just seen seven years’ work go poof, leaving her with a pile of personal debt. “The temper of the Seventies is detached, bitter and escapist. The publications that failed to adjust went under. We tried to adjust, but we didn’t have the money.”

Until last April, Large was publisher of The 4th Estate, once the largest weekly newspaper east of Montreal, widely praised for the excellence of its journalism and strongly supported by readers dissatisfied with the stodgy complacency of the monopoly dailies in Halifax. In the late Sixties, similar dissatisfaction with the other Atlantic dailies gave rise to a remarkable range of “opposition” or “alternate” publications across the east coast— The A lternate Press in St. John’s, The Scotian Journalist and The East Coast Worker in Halifax, The Mysterious East in Fredericton—as an editor of which I made my own start in journalism.

By 1976, they had almost all died. The Highlander suspended publication last Christmas, in its fourteenth year. As Large announced her paper’s bankruptcy, the only survivor was Fredericton’s year-old plain dealer—and it, too, was frantically seeking financial transfusions.

In part, as Large suggests, the times had changed. Most alternate papers were in varying degrees left of centre, saucy or strident, fueled by moral and political outrage. The people behind them were welded together either by their commitment to the paper and its ideas or, in some cases, by actual family ties; the core group at The Highlander, most spectacularly, included no less than eight Campbells— seven brothers and sisters, plus publisher Sandy Campbell’s wife. But the papers had no money—in a sense, their working capital was the commitment and the solidarity of the family involved—and their publishers tended to find the business side of things both boring and distasteful. In the affluent years, that hardly mattered, but in 1977 even good management may not be enough.

“We had become genuine entrepreneurs,” argues Large. “We had transferred our moral outrage into a little company.” But the company owed its printer $38,000, and the printer was taken over by industrialist R. B. Cameron, who then found himself involved in a TV guide advertising war with the Halifax dailies. The 4th Estate had relied heavily on advertising from its

own TV guide, and it couldn’t both carry the debt and fight the developing battle for ad sales.

“All this happened against the background of a recession,” Large points out. “You wouldn’t believe the number of bankruptcies around Halifax this year; the Herald won’t even publish the figures. And the businesses that survived were cutting back on advertising, putting it into larger outlets.”

Hard times, and a general retrenchment of radicalism, have certainly taken their toll. And, as the years went by, the core groups became exhausted, short-tempered, dispirited. When they fell apart, the

publications’ chief resource was gone. Large herself was divorced from former co-owner Nick Fillmore only last fall (both he and Large are now with CBC television in Toronto). In fact, divorces have figured in the collapse of at least four of the papers. A certain despondency set in: what was the point of all this effort when the very things the papers attacked seemed completely unaffected by the assault?

Most of the ex-publishers are bitterly contemptuous of the lack of even minimal government encouragement. “They’ll spend millions and millions on idiotic ventures with American promoters like Bricklin, Shaheen, and the guy behind the Glace Bay heavy water plant,” says Russell Hunt of the late Mysterious East. “But they wouldn’t even advertise with us. Do you realize that, as of last March, Brenda Large was providing more jobs in the Atlantic provinces than John Shaheen? Or that The Mysterious East could have run for an entire year on the cost of one DREE (Department of Regional Economic Expansion) ad in The New York Times? Nova Scotia has just lost 25 jobs, in the middle of a recession. But for these government knuckleheads, a job isn’t a job unless it’s on a boring assembly line in a foreign-owned factory.”

True, the failure to support small, indigenous business has always been a glaring omission in the many Atlantic provinces development schemes. But as Large packed her bags for Toronto, Fredericton’s plain dealer geared up for “at least another six months,” according to co-founder Skip Hambling. A public appeal for funds had brought in about $20,000 in cash and pledges, “mostly in small donations from working people, the very people we’d hoped to reach. With that kind of positive human response we obviously had to continue,” said Hambling, “though we’re still in the classic bind: not enough money to get out of the hole, but too much to quit.”

In Charlottetown, onetime Square Deal publisher Réshard Gooi is still fulminating against the power structure. “These mothers are getting away with murder,” he cries. “It’s so bad I’m thinking of starting Square Deal again. Look here, if we got all the alternate press people together, think of the paper we could start! We could call it something like The Mysterious 4th Deal. And look ...”

Where there’s life, there’s hope. But for the moment, the alternate press on the east coast is comatose—and, said Brenda Large sadly, “1 doubt whether anyone can revive it.” 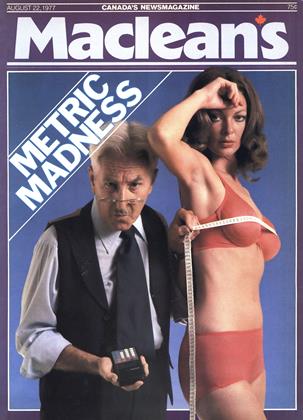