She’s four-foot-two and weighs 80 pounds. Wearing soccer boots, shin pads and a yellow elastic headband to keep her hair from swishing in her face, she bounces across the field in pursuit of the ball; she shows commendable finesse. At 10, Kim Cunningham is already a three-year veteran of the Triwood Tigers of the Calgary Minor Soccer Association, tiny-mite division. “It’s fun to play because you can run for the whole game,” says Kim. “And I’m starting to learn how to head the ball. It’s way more fun than baseball or hockey.” In July, Kim and her Tiger teammates were part of the second annual Calgary Girls Invitational Soccer Tournament, in which some 44 girls’ teams (700 players) went after the ball with heads, knees and feet.

The name of the game is football, or soccer in North America (the Italians call it il calcio—the kick), and it is booming. Organized youth soccer has tripled in the past eight years and big-league Canadian pro soccer has started to make a name for itself. Toronto’s team, the Metros-Croatia, is defending champion of the 18-team North American Soccer League (NASL), the first Canadian winner in the league’s 10-year history. Vancouver is home of the NASL’S other Canadian team, the Whitecaps, as well as this year’s home base for Canada’s professional World Cup team. In October. Canada’s team heads for Mexico to determine the qualifier for soccer’s quadrennial World Cup in Argentina next summer— the first time in history this country has reached the second round of qualification play.

But if pro soccer is doing well, youth soccer is really surging. In Calgary alone there are 300 boys’ and 70 girls’ teams. “This sport is grabbing the kids like crazy,” says Bill Mills, chairman of the Calgary girls’ tournament. “It reflects their interest in playing sports, not just watching.” In Newfoundland some recreation leaders report that soccer has long replaced baseball as the summer game for kids. “They’re having a ball,” says Peter Senko, executive secretary of the Canadian Youth Soccer Association. Overall, some 135,000 youngsters are registered with the Canadian Youth Soccer Association, but that figure doesn’t include church leagues, Y programs and youngsters organized only on local levels. Though still in the infant stage (minor hockey has three times as many registered players) soccer is the fastest growing little league sport in the country.

“Soccer is kicking little league baseball in the teeth,” says John McMahon, manager of Canada’s World Cup soccer team. “Too many kids in baseball sit on the bench or stand in the outfield swatting flies.” Ten years ago McMahon, who runs a large soccer supply store in Toronto, was selling 500 soccer balls a year, mostly in Ontario. Now he has agents “from St. John’s, Newfoundland, to Victoria, BC” selling soccer balls, equipment and uniforms and has already sold 5,200 soccer balls this year. Nine years ago Eric King, executive director of the Canadian Soccer Association in Ottawa, was teacher training at Saskatoon’s Evan Hardy Collegiate

Institute. The soccer team there was struggling because only players who couldn’t make the football team went out for soccer. Now it’s reversed, says King. “There are two soccer teams representing the school and the football coach is saying, ‘Give me anyone you cut from the soccer teams. We need them just to form a football team.’ ” King says the summer leagues springing up everywhere are, in turn, leading to a boom in the schools. “Kids who play in the summer don’t just forget soccer. They tell their teachers in the fall, ‘We want to play soccer, not the other stuff.’ ” There are any number of reasons for the growth of soccer among Canadian young-

sters. The game is inexpensive: all you really need is a ball (which costs from eight dollars to $60) and a school can outfit an entire soccer team for the price of one football uniform. Also, soccer is known as a “safe” sport because the injury rate is incredibly low compared to football and hockey. Senko, who has coached youth teams for 15 years, has seen just one serious injury: a boy who dislocated his shoulder, which had been previously dislocated playing another sport. He says most parents find the safety factor one of the game’s strongest attractions, closely followed by the superb conditioning it provides: often just one season’s play results in astounding development in the leg area.

Indeed, the fitness of soccer players is legendary. Brian Budd, a star with the Vancouver Whitecaps and scorer of the winning goal for Canada against the U.S. World Cup team in December, recently won the Canadian Superstars competition, which pits athletes in a number of sports against each other, showbiz style. Soccer officials, of course, were not surprised: Kyle Rote Jr., star forward of the NASL’S Dallas Tornado, has won the U.S. Superstars competition a record three times.

The nonstop nature of the game provides a special bonus: it is virtually impossible for parents to interfere in a soccer match, so few kids are turned off by parents (or coaches) who give too much instruction during the action, as in littleleague baseball and hockey. The youngsters also seem impressed by the wide variety of skills needed to master the game. “Even if you’re a little guy you can be better than the big guys,” says one 14-yearold. “There’s lots of tricks you can learn to get past someone with the ball.” Kids seem to like the emphasis on coordination and skill—things they can develop—instead of size and strength.

This summer several NASL matches involving the two Canadian teams have been televised, and little Kim Cunningham, like a lot of soccer fans, spent her Saturday afternoons watching them. The glamour team of the league, however, is still the New York Cosmos, boasting imported soccer stars Pelé (the acrobatic Brazilian who has scored more goals than anyone in soccer history), Franz Beckenbauer of West Germany (“Kaiser Franz” to fans the world over, he signed for a reputed $2.8 million over four seasons), and Giorgio Chinaglia (whose fan club in his native Rome has more than 21,000 paid-up members). In mid-July, the Cosmos lured another foreign star into the fold: Canada’s Robert Iarusci. A university student majoring in physical education who learned all his soccer in Toronto, Iarusci is considered so talented that McMahon called his sale to the Cosmos “a great leap forward for the development of Canadian soccer.” Ready to replace Iarusci on the MetrosCroatia was 18-year-old Keith Steele of Winnipeg, a star of Canada’s national junior team.

Such happenings seem proof that the world’s favorite game is finally producing homegrown athletes to rival the imports. NASL commissioner Phil Woosnam, who estimates that about 40% of soccer fans are women, says it’s becoming the new family sport as well as the only pro sport that’s growing. “With all these kids a! the bottom,” says Woosnam, “it won’t be long before their numbers are showing up at college and pro levels.” Anticipating the growth, the league plans to go to 32 teams by 1985.

Despite all this swelling enthusiasm, attendances at Toronto and Vancouver games have sometimes sagged this season. Why? Partly because of strong competition from semi-pro leagues with large ethnic followings. Soccer in North America has yet to overcome a lingering identity crisis because, until recently, most of the youngsters who played soccer were immigrants or children of immigrants. On the professional level, the old country character of soccer still dominates. The Croatian owners of the Metros-Croatia, for example, have adamantly resisted pressures to drop the ethnic reference in the team name. But things are changing. Although the NASL has long depended on imported players, a rule now requires each team to carry at least six Canadian or American players— and, somehow, respectable teams are still being formed. In the last five years hundreds of volunteers, drivers, coaches, managers, referees and officials have stepped forward—most of them people w'ho previously knew nothing about the game. “We’ll soon be as good as the Europeans,” predicts Peter Roe, 21-year-old member of the Metros-Croatia and part of the new wave. “Canadian soccer doesn’t have to take a back seat to anybody, and our kids coming up through the youth leagues will prove it.” RICK BOULTON 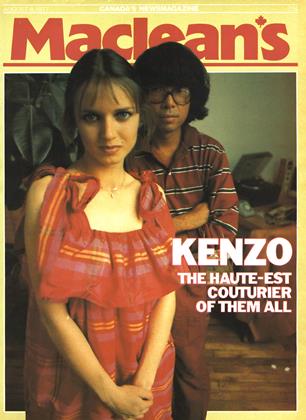