After all the hype and brouhaha and the fuss about Marlon Brando’s $2.25 million for 12 days’ work, it’s been a very low-key location for the continued shooting of the Superman epic 40-odd miles southeast of Calgary. The movie—or more correctly, movies, since a sequel is being shot at the same time—started in England, moved to Manhattan, then to Alberta to film the arrival of the infant Superman on earth from the planet Krypton. Though the man of steel was co-created for Action Comics in 1938 by Joe Shuster, first cousin to Johnny Wayne’s better half, close textual examination of his history does not record Superman’s arrival on this particular patch of Canadian prairie. It was chosen for the pragmatic reason—as befits a production whose costs are spiraling maniacally over $30 million—that the Canadian prairie, particularly this stretch of it, produces superb summer weather, ideal for color film.

“We researched hell out of this area,” grumps director Richard Donner, hitherto regarded as supernaturally gifted for making The Omen, last year’s surprise smash. “It was perfect: climate, light, topography. According to our plan that should be blazing sunshine out there.” Instead, rain was falling—and went on falling, so that Donner must have wondered why the production had ever left England. Result: more delays, which doubled their Alberta shooting schedule from a fortnight to a month and will mean that filming won’t be wrapped up till well into 1978. Still, that’s show business and Donner, though new at the movie game, should by now expect the unexpected—and should have, right from the beginning when Mario (The Godfather) Puzo was hired for the screenplay and produced a 500-page opus instead. Since then Superman has ground through scriptwriters at a rate normally associated with Italian movies: at last count, five.

Marlon Brando, having completed his stint as Superfather in Britain, wasn’t around, Gene Hackman, who plays the archvillain Luthor, was barely seen, and it was too early in the film’s chronology for the presence of Christopher Reeve (the adult Superman-Clark Kent) to be needed. But for Alberta starwatchers there were Margot Kidder and Glenn Ford on hand: Kidder, 28, the Yellowknife-born, Toronto-raised actress who got her movie start in 1969, via a picture in Maclean’s, when Norman Jewison featured her in Gaily, Gaily, but regards Superman as “my big break after 12 years in the business”; and Ford, now 60, doing his usual decent, thoughtful work as Clark Kent’s stepfather. How come you’re here, someone wanted to know. Replied Ford, Quebecborn, decent and thoughtful to the last: “I was doing some work in Wales. I had a spare three weeks. So I jumped on a Concorde and here I am.”

The success or failure of the twin Supermam, of course, will rest on the quality of their special effects. Current champ is Star Wars, which has so far grossed over $110 million and helped double Twentieth Century-Fox’s stock value in the process. European producers Pierre Spengler, 30, and Ilya Salkind, 29, who have already added to inherited bounty with the obstreperously successful Three and Four Musketeers, plainly plan to make Star Wars look like a Meccano set for beginners. “People don’t want to see their own problems when they go to the movies,” says Salkind, echoing every big-buck movie entrepreneur since Adolph Zukor. And so when we see the first Superman next year, we’ll be able to escape into his problems, which are a quantum leap from ours. Among them: how to cook a soufflé for Fois without any messy pans. The Man of Steel’s solution: he cooks it with his eyes. MATTHEW HAGAN 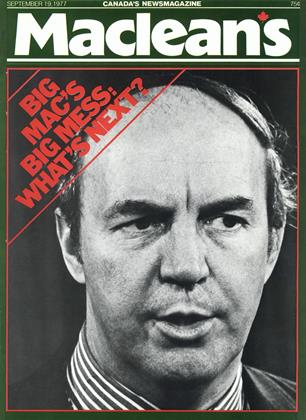