After a decade and more of slow surrender to the siren song of the permissive society, Canada’s biggest cities are fighting back against prostitution and pornography, mainstays of what has become a multimillion-dollar sex industry. For the moment, at least, the cities appear to be winning— mainly through the use of licensing and zoning restrictions enforced by gung-ho municipal police forces. The counterattack has been spurred by civic survival instincts as much as by outrage at the ever-increasing brazenness of the flesh peddlers. In the past few years, bodyrub shops, sleazy bookstores, nudie movie theatres and “escort” agencies have been proliferating throughout urban Canada with the grim determination and frightening speed of lymphatic cancer and, civic officials fear, unless curtailed will ultimately kill off the areas they infest.

Storefront sex businesses tend to cluster together in retail areas (Gottingen Street in Halifax, Yonge Street in Toronto, the intersection of Jasper Avenue and 107th Street in rather tamer Edmonton, the upper Granville Mall in downtown Vancouver) and inhibit conventional commerce. “It’s a question of block-busting,” says Toronto’s Mayor David Crombie. “These places make more money, even if it doesn’t take any brains to run them. They can and do pay higher rents. They force family businesses to move or close.”

Crombie’s alarm is typical of municipal leaders across the continent who suddenly find themselves strongly backed by a longindifferent public, including worried merchants, shocked parents and an aroused press. Says Vancouver mayor Jack Volrich: “Things have gone as far as they can go.” Says Crombie, whose city is in the midst of a massive crackdown on brothels masquerading as massage parlors and therapy centres: “It had reached the point where thesé people thought they could get away with anything. Well, they were wrong.”

Encouraged by a new, less tolerant public attitude toward blatant commercial sex, municipal and law enforcement officers have mounted cleanup operations in a score of U.S. cities as well. Lost, for the moment, in the fervor of decency drives on both sides of the border, are a number of fundamental social, moral and legal issues, including: why there is such a vast and ready market for commercial sex; whether in fact prostitution ought to be legitimized (it is not illegal in Canada, although its solicitation is), as it has been in parts of Western Europe; how or if civil liberties are in-

fringed by restricting or denying access to sexually explicit films and reading material; and what may happen to the recently won progress toward equality made by a large and growing homosexual minority. Clearly, these questions will not go away but will continue to haunt legislators and lawmen until some consensus emerges. So far, none has.

Last month, the city that used to be known as Toronto the Good was shocked and sickened by the brutal slaying, during the August civic holiday weekend, of a 12year-old shoeshine boy named Emanuel Jaques. Police said the boy had been

tugúese community, shaken at the loss of one of their own. The Portuguese in particular demanded that the politicians and police clean up Toronto’s main drag, which, with its pesky hookers and petty hoodlums, is unarguably the meanest street in the nation.

In fact, Crombie and other civic leaders were already moving to crack down on Yonge Street’s sex industry before Emanuel’s death. A “war room” had been established at city hall and a “war council” impaneled. Besides the mayor and Aiderman Susan Fish, co-author of an earlier report that declared Toronto’s “Strip” to be as nasty as any in North America, the group included Deputy Chief Jack Ackroyd of the Metro Toronto Police and David Walsh, president of the Downtown Business Council, an association of merchants and tenants concerned about the street’s deterioration.

Once Emanuel’s body was found, Crombie’s cautious advance turned into a headlong charge. Within days it became a rout. Over the years, bodyrub operators and pornography purveyors have fought tenaciously to protect their lucrative businesses, but Yonge Street’s flesh peddlers quickly threw in the towel. As police began daily raids and as a special prosecutor (lawyer Morris Manning, 36, chairman of the criminal justice section of the Canadian Bar Association, who accepted the $100-an-hour job) began getting writs of injunction against the rub parlors, most of them simply padlocked their own doors and went out of business.

Although the Toronto situation was the most dramatic, the story was not confined to Yonge Street. Elsewhere in Canada:

• Vancouver’s Mayor Volrich was in the midst of an anti-pornography drive which seemed to have broad public support despite the fact that one of his colleagues on city council dismissed it as an attempt to grab headlines. As for the Emanuel Jaques case, Volrich warned Vancouver: “It can happen here.” It appeared he had a point. Last April, Vancouver police laid six charges after uncovering a juvenile prostitution ring in the west end. According to police, about 10 boys aged 12 to 16 were prowling the streets, looking for clients.

• In Edmonton, Mayor Terry Cavanagh and Police Chief Robert Lunney responded to a petition from businessmen with a crackdown on the hookers who were flocking to the Jasper Avenue-107th area and harassing pedestrians. Police patrols have been increased, and the girls have been arrested for such minor offenses as jaywalking.

• In Winnipeg, where the sex industry is scattered but thriving, an attempt to cash in on Yonge Street’s notoriety has infuriated

This Maclean 's National Report was prepared with the assistance of Judith Timson in Vancouver, Suzanne Zwarun in Edmonton, Cynthia Wine in Winnipeg, David Thomas in Montreal and Lyndon Watkins in Halifax.

the respectable merchants of Kennedy Street. A group called the Nevada Entertainment Association recently published an advertisement suggesting that Kennedy Street could become just as lucrative as Toronto’s Strip. Would-be reformers in Winnipeg have been stymied since 1975 when bodyrub operators began delaying tactics against a local bylaw that would have severely curtailed their hours of business (some operate 24 hours a day), clothed the attendants in demure costumes and required patrons to register their real names. • In once-wicked Montreal, where “The Main” (St. Lawrence Boulevard West) in its postwar heyday would have made today’s Yonge Street look tame, the nudephotography, nude-encounter, and bodyrub shops have been all but closed. Last year, police smashed what they described as a multimillion-dollar massage monopoly controlled by a businessman named Richard (Ziggy) Wiseman, now serving 4'/2 years for attempting to corrupt a police officer, living off the avails of prostitution and operating houses of prostitution.

Despite the concern among municipal leaders and urban citizens, Canada is really minor-league in the commercial sex field—compared to the United States or such wide-open European countries as Holland, West Germany, Denmark and Sweden. But Canada may be heading their way at least as far as pornographic movies are concerned. The Supreme Court is expected to bring down a decision soon on a ruling by the Nova Scotia Court of Appeal to the effect that provinces have no author-

ity to censor films. Should the federal court agree, it would mean that all provinces would have to get out of the censorship business. “Yes,” says Ontario Attorney General Roy McMurtry, “we could end up with Deep Throat showing in Toronto the following day.” McMurtry, like many politicians, is more concerned with the public aspect of commercial sex and with its exposure to, or exploitation of, minors than “I am with what people do, or read or watch in private.” Still, he feels, “total freedom and total license can never exist side by side.” It is the conflict between the ideals of freedom of speech and expression and the rights and dignity of the public-atlarge that so bedevils judges and legislators alike. Eventually, though, McMurtry believes, the federal government will have to try to improve definitions of obscenity and remove uncertainties from the Criminal Code. Canada’s police chiefs want clearer laws, too, and late this month were pressing Justice Minister Ron Basford to restore vagrancy to the code to help them nail streetwalkers and pimps.

Meanwhile, the homosexual community in Toronto worries about a backlash, once the men accused of slaying Emanuel Jaques come to trial. Says George Hislop, 50, president of the Community Homophile Association of Toronto (CHAT): “TO a certain extent, the bodyrub shops absorbed the initial heat when this outrageous crime came to light. But once

they’re gone, and once the trial begins and the sordid details become public, I fear that emotions will run strongly against gays. I can understand why, but it’s a pity. The gay community was as shocked by what happened as anyone else was.”

Call her Josie. In the work-a-night world of commercial sex real names don’t matter anyway. Josie is as good a name as any, and besides, there’s a song about her:

Josie, is it true that you’ve grown harder than your years,

Sellin ’ them your sadness on the street?

How much did you lose between the laughter and the tears,

Gettin’ back the bitter for the sweet?* And when Kris Kristofferson wrote it he might have been writing about almost any of the young women who’ve been grinding out a fat living in the massage parlors of Main Street, North America. The Josies of Yonge Street, predictably, run to a type: young, under-educated, flashily attractive, greedy and, like most whores (despite the label “hustler”), lazy as sin.

The Josies mostly toil one flight up, in sleazy clubs with unimaginative names such as Relaxation Plus, Skin Deep, Venus, or Charlie’s Angels. There, in their tacky nighties or their wired-up bras and their drop-down panties, they work their shifts. They may pose in the nude for incompetent “photographers” or sit in the nude and pretend to discuss a client’s sexual problems or they may stand in the nude and half-heartedly rub baby oil on their client’s body. But this is all beside the point. The point is extras—masturbation, oral sex, and copulation—which no one connected with the “industry” really tries to deny anymore. Josie’s earnings depend on how many extras she can persuade her client to buy, and how much cash she can extract from him for the service. When she’s not “working,” Josie often rationalizes: “Well, uh, you know, these guys have their problems and we sort of help. I mean, it’s like we’re social workers or something.” Or she complains: “This crackdown really won’t change anything, except it’s makin’ it hard for me to make ä buck.” Or she snarls: “Get stuffed, we’ve had enough trouble with reporters.” Or she smiles sweetly and says: “You know, I kind of like the work and the money’s good, and besides nobody really gets hurt.” Prostitution is sometimes described as a “victimless crime.” The Josies of Yonge Street suggest otherwise, fy 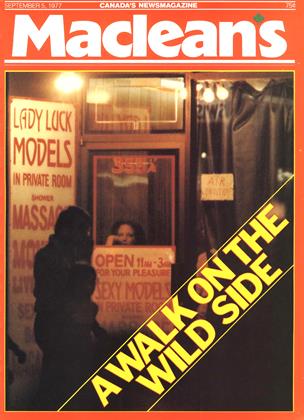