Diphtheria, measles, whooping cough, polio. The mere whisper of these words produced panic in parents just two decades ago. Those were the days before mass vaccination. before parents entrusted their children’s health to the needle. Since then, parents have relaxed. And that, says Dr. Crawford Anglin, chief of infectious diseases at Toronto’s Hospital for Sick Children, is precisely the problem. Parents have relaxed so much they’ve forgotten that infectious children’s diseases still are deadly. Too many young parents with no firsthand knowledge of the pain and death unleashed in an epidemic of diphtheria or polio—or even measles—are getting sloppy.

In 1977, says Anglin, more than 25% of Canadian children entering school (closer to 50% in some areas) had not been vaccinated. Yet doctors know that a healthy 90% immunization rate is needed to guard against major outbreaks of disease. Echoing Anglin’s concern. Dr. Frank White, Alberta’s director of communicable disease control, points out that all immunization levels have been dropping steadily since the end of the polio scare in the mid-Sixties.

As immunization falls, the threat of widespread disease and suffering rises. Ten thousand cases of red measles were reported in Canada in 1977, three times the level in 1972. “But most cases don’t get reported,” cautions White. “The real figure is probably over 50.000.” Of those 50,000 cases, fully one in 10 developed complications that often resulted in hearing loss or some other permanent impairment.

Local outbreaks of childhood diseases still are common. There has been an outbreak of diphtheria in every province within the past five years. Whooping cough is reported every week at Toronto’s Hospital for Sick Children. And doctors still consider polio a threat. While most recent polio cases in Canada were imported from theThird World.White warns that if immunization continues to drop a breakout will occur here. Perhaps the greatest continuing tragedy, however, is rubella (German measles). Though seldom fatal to children, if rubella is contracted by a woman during the first three months of pregnancy chances are better than 50% that her baby will be born deformed or mentally retarded. Thirty such children were born in the Maritimes after a rubella outbreak in 1974.

Since immunization programs are widespread in schools, the burden of childhood disease now falls on the preschooler—and

the responsibility for vaccination on the parent. Unlike past generations, however, many parents don’t see why they should bother. Also contributing to lower immunization rates are new Canadians with language problems and different traditions of public health. Often they are not even aware of the services available.

Recognizing the hazard of decreased immunization rates, doctors are just beginning to take action. A national campaign called Immunization Action Month, cosponsored by the Canadian Pediatric Society and the Canadian Institute of Child Health, was tested in October. Dr. John Tibbies, president of the pediatric society, says the campaign will become an annual event starting next fall. He adds: “The avoidable misery is a quiet accusation of what a society hasn’t done—but should have.” MURRAY McGREGOR 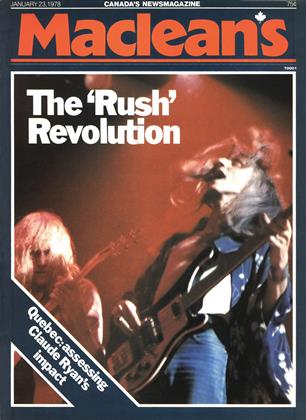