What’s on the tube tonight, dear? Everything ALLAN BAILEY January 9 1978

Whatever happened to tomorrow? It should have arrived ages ago, that gleaming, gimmicky utopia of videophones, moving sidewalks and jet ports on every roof. Back in the 1950s and 1960s optimists assured us such wonders were imminent. We’re still waiting. Most prophesies got delayed somewhere on the journey from the drawing board to reality. Others made the trip only to be stillborn. There was the amphicar (part car, part boat, and not much of either), for instance. It made a sudden leap from the pages of popular magazines, ran smack into common sense and now stands testimony to technological silliness. But among the stillborn fantasies is one that has refused to die: the dream of the “wired city,” a community linked by television sets transformed into computer terminals.

That idea has bobbed in and out of public consciousness since it was popularized in science fiction novels decades ago. It was in Canada, in fact, at Carleton University’s Wired City Laboratory, that much of the technology was pioneered. Now futuristic information services are in various stages of development in several countries, including the United States, Japan, West Germany and Australia. But it is Britain, the nation that offered us George Orwell’s vision of a 1984 world dominated by the omnipresent television, that has taken the lead in marketing the technology. Several electronic information services are rushing to corner the British market but the most solid and sophisticated is Viewdata, a system backed by the U.K. Post Office, the government agency that not only operates Britain’s postal service but its telephone and telegraph systems as well. When market trials begin in June, Viewdata’s concept of instant information will fight for acceptance from the harshest of critics, the paying public. If it wins, and there’s every indication it will, Viewdata will be expanded into a standard public service available to all British telephone subscribers—in time for 1984.

In June, the television sets of 1,000 Post Office customers in selected homes in London, Norwich and Birmingham will be connected, via the telephone lines, to a large central computer at Norwich, in north central England. In effect, the ordinary television set will be transformed into a two-way personal information emporium, a kind of electronic library. To start, the viewer will have at his fingertips 60,000

pages of information—everything from stock market figures through holiday guides to buying advice.

The system’s most appealing innovation is its two-way interactive capabilities. Not only can viewers obtain information, they can also add to the computer’s data banks. Viewers can summon from the computer the information they desire—bus schedules, automobile prices, tax information— by using a special decoder that resembles a pocket calculator. The information will

appear immediately as printed text on the screen. Viewers can even talk to one another by sending messages, such as birthday greetings, to the homes of friends who also subscribe to the service.

These are not fanciful dreams. They are the results of hard-nosed strategy by the U.K. Post Office to increase revenues. Besides, the technological feasibility has already been demonstrated. The June market trials are designed simply to assess what types of information people want.

how much they want, and how much they are willing to pay. Initially, says Viewdata manager Roy Bright, the high cost of the decoding equipment (currently about $850 per set) will restrict the service to businesses. Soon, however, the price is expected to drop within reach of the average householder as costs plunge with mass production. Then the cost for use will be roughly equivalent to the cost of a telephone call in Britain: charges will take into account the number of times information is added or retrieved as well as the amount of information used.

The full implications of Viewdata have yet to sink in. Gordon Thompson, a sort of one-man think tank employed by BellNorthern Research in Ottawa, says the British system is the forerunner of “a significant new mass media” which could set the pace for a worldwide information revolution that will radically alter our living patterns. A truly wired city, for example, would enable people to stay home all day and conduct their business transactions by television. The new technology will also bite deeply into markets now controlled by traditional media. ‘Tn effect, the door-todoor newspaper is dead,” says Tom McPhail, a former consultant at the federal communications department. He believes it is “the technological and regulatory clout of the Post Office” that has rescued the Viewdata concept from the realm of speculation. Now, he says, the technology already available can be put to use. In education, Viewdata makes possible a sort of two-way Sesame Street for handicapped children who need individually paced instruction in the home; in politics, it offers a national poll on issues of the moment; and at income tax time, it can do everything from providing data on laws and procedures to making the calculations and delivering the returns to the revenue department. It even offers an elegant solution to postal paralysis: electronic mail.

Recently, representatives from the CBC, Selkirk Holdings, The Toronto Star and Transport Canada have visited Britain to scrutinize the British experiments. Don Atkinson, director of business planning development at Bell Canada, says the company is considering a demonstration project similar to Viewdata. Michael Hind-Smith, president of the Canadian Cable Television Association, says the association is exploring a variety of systems using cable TV instead of TV and telephone lines. British television executives say Canadian visitors have been most concerned about the difficulty of launching a system over large geographic areas and the threat such a system poses to television advertisers. Obviously, it is during commercials that viewers will switch over to an information service. Says Lord Grade, the kingpin of commercial television in Britian: “For 15 years I’ve been trying to stop them [the viewers] from going to the bathroom [during commercial breaks] and now you invent this.” 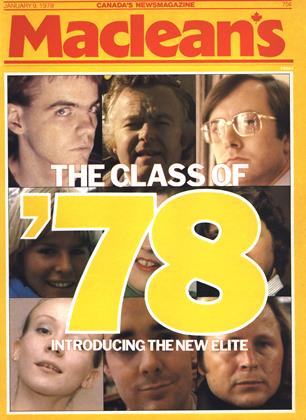