Cherubs,” agrees Michael Snow, a glint in his eye and tongue firmly in cheek, “cherubs might be just the thing. To go with the Canada geese.” Canada’s leading conceptual artist toys with the suggestion, but he’s not about to add angels to his proposed sculpture, a wire and linen flock of 50 life-size migratory geese designed to look as though they’re about to land on the indoor treetops of a downtown shopping centre in Toronto. At 49, canonized by international critics and curators, enthroned in the pantheon of avant-garde film-makers, honored by a Europe-wide retrospective of his films, photographic works, sculpture and music opening this week at the prestigious Centre Pompidou in Paris, Snow served up some surprises before jetting to France—this wonderfully surreal sculptural concept with geese and a huge, gridded optical illusion of a painting tentatively titled The Squerr Ch’art, his first painting in 11 years.

Painting, declared obsolete by ’60s pundits, spurned outright by conceptualists who turned to film, video, earth works and body art—how could Snow, a role model for the upwardly modern, revert to such a retardataire medium? “It might be more radical now to be conservative,” muses Snow, slouched over a Styrofoam cup of tepid coffee in his downtown Toronto studio. “The dissection process seems complete, the

critical, analytical way artists have looked at art since the Impressionists. We may be in a period of synthesis where looking back may be a way of doing something new.”

For the past two decades,* Snow has been plying and playing with visual philosophy. What is real, what is illusion? Can you believe what you see? Or for that matter, understand what you hear? For Snow explores sound as well as image, producing abstracted sound “sculptures,” improvisational concerts with the Canadian Creative Music Collective, recordings (LPs, such as Musics for Piano, Whistling, Microphone and Tape Recorder, accompanied by dense album notes) and of course his films, which have brought him fame, if not fortune, in the world of vanguard art. His last film, completed in 1974, with the exhausting title of Rameau’s Nephew by Diderot (Thanx to Dennis Young) by Wilma Schoen, examines wittily and at marathon length—close to five hours—the complex, paradoxical relationships of “talking pictures.” It’s not a traditional movie with stars and a story line, but rather a vast abstracted sentence detailing the sights and sounds of thought—Michael Snow’s, that is. See/Hear Now could be Snow’s credo for, whatever the medium, he continues to frame and project his perceptive messages about perception.

cause it sounds as though I’m a scientist or a detective,” says Snow, carefully focusing two spotlights on his just completed canvas which sits on cinder blocks against one stark white studio wall. “This painting, for example, is not so much a decorative object as a record of a really profound and ambiguous experience, the act of seeing. There are many factors involved: the context, the angle, the light. I work with what’s there, with the medium, rearranging all the elements in the world that are meant to be used and showing the process. Basically, I’m a poet of light and space and time.”

Critics have lavished praise and polysyllables on Michael Snow. One New York writer filled six pages with fine print to claim Snow’s three-hour landscape opus, La Région Centrale, as the best film he’d ever seen. And the word “genius” trips lightly off some tongues. Indeed, Snow has achieved several firsts: the first Canadian shown solo at the Venice Biennale; the first, and so far, only Canadian awarded a one-man exhibition at New York’s Mu-

seum of Modern Art; the first Canadian given a retrospective at the impressive arts complex in Paris. Culled from work of the last 14 years (including three major sculptures), the show remains in France until the end of January, then it will tour for a year to museums in Holland, Switzerland and Germany.

Despite all this ego massage, Snow a stays remarkably sane and unpreten5 tious—Humble-Pie Mike, as National Ï Gallery curator Pierre Théberge aflfec> tionately calls him. Thin, soft-spoken, ^ with an infectious wit and wild grey o hair (the product of a drastic shearing by artist Joyce Wieland, his wife of 20 ¡= years), Snow’s tastes run to T-shirts ^ (he’s never owned a three-piece suit), E such down-to-earth pleasures as a pint 0 of beer in the corner pub, and a small ¡3 house on the proverbial wrong-side-of¿ the-tracks, stocked with books, records 0 and a grand piano—Voltaire with Canadian Gothic overtones.

Recently, he and Théberge jammed into a back booth in a radical-chic restaurant where Toronto artists, entrepreneurs and culture groupies hang out, and, over trout amandine, punned their way through a bilingual comedy routine which suggests that, should fine art ever pall, vaudeville might offer new career opportunities. Not that Snow needs them. Versatile, inventive, he’s been a jack of many trades and master of them all: painter, musician, sculptor, printmaker, teacher (Yale University), writer, book producer and, of course, film-maker and photographer. Since the late, great Marcel Duchamp, few

other artists can claim expertise in so many different areas.

“One thing just leads to another,” says Snow. In the early ’60s, using the jazz-based technique of theme and variations, he worked and reworked a Walking Woman image, painting her, stencilling her, mailing her, sculpting her and starring her in his first important film, the 1964 New York Eye and Ear Control. Two years later he made Wavelength, the movie which made him by winning first prize in the Fourth International Film Festival in Brussels and later, almost every award there was to win. Aslow, relentless,45-minute camera zoom accompanied by a rising electronic howl, Wavelength finally focuses

on a lyrical photograph of the sea, punning on its title which refers to ocean, sound and color waves. With process and product, medium, and single-minded metaphor united in one frame, it became an instant icon in structural cinema and inspired later films such as Back and Forth, a 55-minute - long, head - wrenching pan of an empty classroom which caused a riot at one screening in New York. Snow constantly recycles, producing books that are like films, films that are like books and photographs composed almost stroke by stroke like paintings.

He’s about to make another film, but he seldom goes to other people’s movies. “You laugh when the actors laugh, cry when they cry, I get moved like everybody else,” Snow explains, “but I’d rather be doing something more inventive on my own. You have to play, take chances, do things you’ve never done before, experience feelings you’ve never felt before. Otherwise you’re just an illustrator, repeating what you already know. It may be a way of giving someone else something new to give yourself something new.” 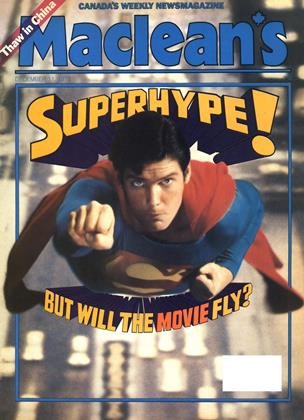