Three years ago the Canadian writing team of Aubrey Tadman, 45, and Garry Ferrier, 41, took off for Hollywood, forsaking Wayne and Shuster, Anne Murray and the King of Kensington for their American network counterparts Donny and Marie, Rhoda and Dick Van Dyke. Having performed so creditably on their keyboards over the years, T’n’ F were hired as comedy writers by CBC to help resurrect Mary Tyler Moore, whose comedy show Mary bombed (and was cancelled) three weeks into the fall season. According to Tadman, the revised Mary Tyler Moore Hour, scheduled for the new year, “will be a page out of the past, taking the concept from the old Jack Benny-Red Skelton shows. There’ll be story lines, comedy and guest stars plus music.” Although Tadman is comfortably settled with his wife and three children in their San Fernando Valley home, old loyalties run deep. He still flies a Canadian flag in his office and admits, “We’d like to come back and do specials for the CBC. In fact, we’d still be there if more was going on.”

¿Although 29-year-old actress and Zr\A former model Susan Sarandon doesn’t see herself as the maternal type,

it appears that casting directors do. In Sarandon’s last movie, Pretty Baby, she played the prostitute mother of child star Brooke Shields. In her latest movie, King of the Gypsies, Sarandon again has the part of a mama; queen mother

to the newly crowned king of a New York gypsy tribe. Unfamiliar with the ways and wiles of gypsy women, Sarandon did a little research into the role. “I found a New York policeman who set me up with some gypsies,” said Sarandon. “They’re a very anonymous patriarchal society on one hand, yet the women raise the kids and put the food on the table. Although in ways we’re very different, gypsy women are strong. That I could relate to.”

H-Wen before the canvases were unL—3 crated, bidders were signing up for Prairie artist Dorothy Knowles’ latest exhibit at Toronto’s Waddington Gallery. Within 25 minutes of the show’s opening, 15 of her 16 landscapes had been sold and a week later, all but one watercolor and two drawings had gone. “When you work all year on a show and watch it all go so quickly, it leaves you with an empty feeling,” said Saskatchewan-born Knowles. Nonetheless, she has had more trying times with her exhibitions. In the late ’60s, her first shipment of acrylics to Waddington’s in Montreal was burnt up en route. Last year, her first New York show had framing problems. When frames arrived too small to fit the paintings, the New Yorkers “clipped” the art to fit the frames.

□ t Happened One Night happened 44 years ago when actress Claudette Colbert was 29 and well on her way to being dubbed “The Queen of Comedy.” These days, however, it happens every night as Colbert, 73, is back acting, playing a widow opposite Rex Harrison in the Broadway comedy The Kingfisher. Although suffering slightly from a bad back, Colbert, who’s making her first Broadway appearance since 1963, says she’s tickled to be on stage again—especially since she’s allowed to act her age. “You don’t often find the right parts at my age,” said Colbert, the veteran of 64 movies who now makes her home in Barbados. “Remember. I’ve been on stage for 55 years, so I refuse to play the role of a woman in her 50s. When I read this comedy I thought ‘Thank God. She’s supposed to be 70!’ ”

n iquor may be quicker but Candy is LTD just dandy according to Playboy publisher Hugh Hefner, who had a hand in picking Playboy’s 25th-anniversary playmate. Chosen from more than 3,000 candidates, Candy Loving, a 22-year-old married college student from Poncha City, Oklahoma, says she was selected as the silver celebration bunny because: (a) she’s an all-American girl. “I like apple pie and ice cream and I have strong family ties”; (b) she’s intelligent. “I’m studying public relations at Oklahoma City University and maybe would

like to try modelling after this year”; (c) she has good business sense and a mind of her own. “At first I was in it for the money [$25,000] but then I felt comfortable posing [white fur and garter belts]. My mother said she knew I wouldn’t do anything I didn’t want to do. And my husband, a steward with Texas International Airlines, was very supportive”; (d)all of the above. “I guess really they’re trying to sell the whole package”; (e) none of the above (37-2434).

Dt was comparable to William F. Buckley appearing in The Village Voice when Vancouver’s right-wing columnist Doug Collins (Maclean’s, Oct. 2, 1978) showed up last week in the pages of Georgia Straight, Vancouver’s once politically, now politely radical weekly. Hired by Straight publisher Dan McLeod, Collins conceded that his byline would undoubtedly “lose the paper readers.” However, he didn’t realize it would cost them staff. Nonetheless, after hearing that Collins had been hired, Straight book reviewer Alan Twigg gave notice that he wouldn’t appear in any edition with Collins. Said Twigg: “It makes sense not to publish Black Panther manifestos anymore. But it doesn’t make sense to print the views of someone many people consider sexist and racist.”

/¿Although many “serious” writers Zru abhor the convention of the publicity tour, Brendan Gill, author of Summer Places (with photographs by Dudley Witney), thinks flacking is “wonderful fun.” While recently promoting his book in various U.S. cities, as well as Montreal, Ottawa and Toronto, Gill has been playing hooky from his regular job as drama critic of The New Yorker, the magazine which has been his business address for the past 43 years. Not to worry. Broadway complied with his travel schedule—by not holding an opening in his absence. “Since architecture is my passion, I love getting out to different cities,” said Gill, 64. “San Francisco is the most beautiful city in North America. When you get tired walking the streets, you can lean on them.”

rjvNeparting from standard political Lk'J fund-raising affairs, there wasn’t a passed hat, a long-winded speaker or a rubber chicken dinner in sight last week when Consumer and Corporate Affairs Minister Warren Allmand tried to raise money for his riding association of Notre-Dame-de-Grâce. Instead, Allmand held a $130-a-couple dinner and disco at Régine’s, the fashionable Montreal nightspot of the Stayin’ Alive gen-

eration. Among the 250 in attendance were former solicitor-general Francis Fox and his wife of three months, Viv-

ian, European film star Vittorio Gassman, Canadian film director Richard Heilman (A Special Day) and an assortment of Quebec entertainers including chansonnier Michel Girouard and actress Andrée Lachapelle. Although a Paris engagement kept the invited prime minister away, no one had to question why Canada’s disco queen, Margaret Trudeau, hadn’t been asked to attend the Liberal frolic.

bserved recently at New York’s Nova Convention, Dr. Timothy Leary, former Harvard psychologist and psychedelic guru of the ’60s, was preaching on the problems of growing up. Dressed in jeans and running shoes, the 58-year-old Leary (who was sentenced on drug charges in 1970) told an assortment of colleagues, students and rock stars including Patti Smith and Frank Zappa: “At all costs avoid terminal adulthood. As you well know, the juvenile dinosaurs who refused to follow the adult dinosaurs became birds.” After exhausting the topic of lost innocence, Leary then moved on to another of his pet projects—colonizing outer space. 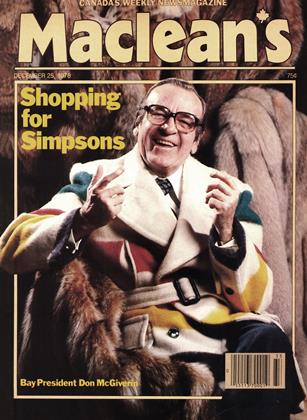