It was the coldest night of Brandon’s long winter, a numbing -30 degrees Celsius. Cars disappeared in the shroud of their own exhaust, as though in search of some enveloping warmth, and folks with any sense drove home, turned on the television, put an extra blanket on the bed and canceled any plans for going outside again. But Western Canadians do not submit easily to winter. They may not grin much, but they bear it, pursuing a round of social activity that stops for traffic lights, though rarely for blizzards.

On February l, in the city’s Red Oak Inn, the Cargill Grain Company’s annual dinner went on as scheduled, the turnout not noticeably affected by the weather. The weekly bingo game in the Keystone Convention Hall drew its customary throng of loyal patrons. And not far away, at the Towne Cinema, the line began forming for the first evening show a full hour early, a line of old women and young girls clapping their hands repeatedly against the cold. By 6:45, when theatre manager Dave Pilcher finally opened the doors, the lineup stretched far down the block, almost as far as Rosser Avenue. The women were waiting for the world premiere of

Leopard In The Snow, a Harlequin Enterprises production and the first Harlequin novel—more than 2,300 have been published—to be rendered into film.

Until 1958, when it issued its first romance novel, Harlequin was a modest Winnipeg publishing company. Fiction, adventure, a little pornography—these were its staples. But the release of Hospital Corridors set the company in a new direction. Five years later, all but one of Harlequin’s titles were romances, paperback editions of hard-cover novels originally published in Britain.

All of the books were essentially the same, formula fantasies that invariably ended happily ever after. Heroes were handsome and had money. Heroines were virtuous girls who fell easily in love with handsome men who had money. The meeting, the chase, the acquisition—it never changed. Still, even with reprint rights for the entire North American continent, Harlequin’s financial statement throughout the Sixties elicited barely a passing glance on Bay Street. Its 1970 after-tax profits were a mere $110,000.

The man who turned Harlequin around, assessed and fulfilled its potential, was W.

Lawrence (Larry) Heisey, a Toronto marketing executive schooled in the tradition of Procter and Gamble, where he spent 13 years. Heisey joined Harlequin in 1971 and although, like most men, he had trouble reading past the first chapter of the novels, he saw great commercial possibilities—expansion and diversification. Romance in the end was not unlike detergent: clean, nicely packaged, and used principally by women. Presumably, the same advertising techniques that made soap a multimilliondollar industry could be refined to sell softcore romance. (Indeed, in one innovative campaign, Heisey has put Harlequin novels inside boxes of Bio-Ad laundry detergent.) The product was almost irrelevant; what counted was marketing—research and strategy. Find the market, then pursue it: the formula seemed as simple as the plot lines.

Heisey’s innovations yielded unprecedented results. Record sales for one quarter were often broken the next. By 1972,

profits had climbed to $1.6 million. Every novel—12 new ones every month—was a best seller. The growth curve climbed geometrically. In 1974, 63 million Englishlanguage books were sold; two years later, the figure was 80 million; last year, 100 million (almost 20 every minute). Revenues topped $60 million. On the Toronto Stock Exchange, shares of Harlequin stock rose, split, rose, split and rose again. The Toronto Star bought 53% of the company and, in a period of sluggish performance by other assets, was kept buoyant by

The company expanded, first to Europe and later to Asia. The novels are now published in 16 languages. It also diversified, moving profitably into learning materials and magazine publishing and (in its only significant failure to date) into science fiction novels, which have now been discontinued. It seemed only logical that, with Ottawa’s generous tax concessions to Canadian film makers, Harlequin should eventually turn its attention to the movies.

Theatre manager Dave Pilcher spent a good part of February 1 thinking about Leopard In The Snow. On the one hand it was a world premiere; on the other it was -30 degrees Celsius. On the one hand Harlequin had launched a heavy campaign of television advertising and promotion for the film—a 19-day media blitz featuring 13 separate 30and 60-second commercials, the most extensive and expensive campaign ever for a Canadian film; on the other hand, the movie (like the novels) appealed mainly to women. Were Harlequin readers moviegoers? And if they were, would they be able to drag husbands and boyfriends to a film that offered no sex, no violence and no four-letter words stronger than love? That, thought Dave Pilcher, was the question.

A combination manager, ticket taker and projectionist, Pilcher stood in the tiny lobby of the Towne Cinema, looked at the crowd pouring through its doors and

smiled broadly. Two women from Market Facts of Canada Ltd., the research company hired by Harlequin to find out who the people were and why they had come, were busy handing out a two-page questionnaire; those who filled it out were eligible for a draw offering free passes to a subsequent film. The questionnaire asked patrons where they had heard about Leopard, how often they went to the movies, their age, their sex and whether they read Harlequin novels—basic information needed to test the market. Follow-up

phone calls would determine response to the film.

Leopard In The Snow had been booked for a week’s run, two showings every night. Pilcher’s average gross revenues for a week were $5,000 for a typical film. A better than average turnout on opening night augured well for the next six days. However, the turnout for Harlequin’s world premiere was much better than average. Of the 297 seats available for the 7 p.m. showing, 278 were sold, most of them to women so engrossed in the film that they forgot to remove their fur coats. (Perhaps 5% of the audience was male.) The second showing brought another 195 patrons. On the coldest night of the year, almost 500 people

came to see a pure, unadulterated, unapologetic love story. The Towne grossed $ 1,337 for the night and Dave Pilcher mentally considered holding the film over beyond its scheduled run.

No one was more delighted than Christopher J. F. Harrop, the film’s 31-year-old coproducer, and the man who engineered Harlequin’s auspicious plunge into the uncertain waters of the movie business. On behalf of the new venture, Harrop traveled 150,000 miles last year, and spent 150 days out of the country. He sold distribution rights to 12 different countries and brought the film—shot in Collingwood, Ont., and London, England—in slightly under its $1.3 million production budget.

It was Harrop who determined that Leopard In The Snow would need an unconventional—for the trade at least—marketing approach. Instead of opening in a dozen major urban centres across the country and then filtering out into the rural markets over a period of months, Harrop felt Leopard would do better by starting in the smaller centres, where there was less competition for the entertainment dollar and where Harlequin readers were especially loyal. Within three weeks of its Brandon premiere, virtually 90% of Manitoba would have been exposed to the film. This saturation technique was backed by a hard-sell advertising campaign and a softsell public relations round of media interviews.

Harrop knew, of course, that most film critics would come down heavily on the movie. The script itsef is a collection of one-line clichés; the music, by Kenneth V. Jones, sounds like a poor imitation of Michel LeGrand; the acting by 42-year-old Keir Dullea and British actress Susan Penhaligon has the resilience of petrified wood. What effect such criticism might have, Harrop could not predict. “Some films have done extremely well in the face of terrible reviews,” he said. “And vice versa. To some extent we’d like to criticproof the film by demonstrating that there is an audience for it. We think it will appeal to people who might not be regular moviegoers, people who don’t want to see sex and violence or be misled by advertising. That’s why promoting the name Harlequin is so important; people know what to expect from us.”

Leopard In The Snow was everything it promised to be and nothing more. Women loved it. The film differed a little from the novel, which many had already read, and slight Keir Dullea would not fit every moviegoer’s image of the tall and handsome hero, yet the film clearly worked. The opening night crowd in Brandon even applauded at the end. A very informal Maclean’s survey found that nine out of 10 enjoyed the film and would look forward to another of its kind. In Winnipeg, where the film opened February 3 in three suburban theatres, the results for Harlequin were equally heartening; at the Kings theatre alone, where it replaced Star Wars after 32

weeks, more than 500 filmgoers turned up on opening day.

Not everything Harrop planned worked perfectly. A last-minute decision to hold matinees at the Kings yielded only 35 patrons on the first áftemoon. And in northwestern Ontario, where many communities receive only CBC television, the advertising campaign backfired because the ads were bought on a CTV affiliate station. In Fort Frances and Atikokan, less than 40 people turned up for the opening showings—dramatic evidence of the impact of television promotion. (Harrop moved promptly to correct that by buying 29 “spots” on CBC during the following week.)

Still, he seemed gratified by the results. “We’ll only be disappointed if we fail to learn what we’ve set out to learn: who likes the film and why. Have we hit the target group? Did the film match their expectations? If not, why not? We’ll never make a film with universal appeal.”

Nor did Walt Disney—and his studios still churn out certified box office hits. Harlequin may one day do the same. A second movie, Island Of Dreams, is now in preproduction. Screenplays for three others (one, Harrop claims, being written by a Canadian) are also in the works. The potential seems limitless: one can envisage resales to television, a Harlequin Hour weekly TV series and—carried by the tide of new technology—home video cassettes of Harlequin films. The mind congeals.

To the artistic personality, such success, present and future, may be dispiriting. At any level, Harlequin is not about art or excellence. It is about marketing, the selling of adult fairy tales to a lineup of readers and moviegoers that extends up to Rosser Avenue and beyond, past where the eye can see. MICHAEL POSNER 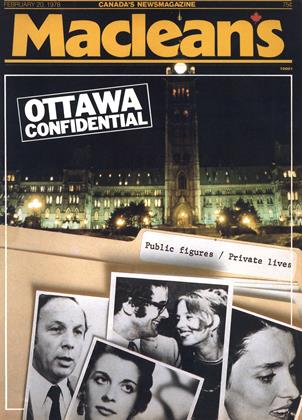