In Author! Author! (December 12) Walter Stewart states unequivocally that I turned up for a radio interview “reinforced with drink.” This is not true. He also says I mumbled. I never mumble, unless I’ve just returned from the dentist, which was not the case on this occasion. At the end of the day, an interview with a writer from The Montreal Star was scheduled. Thirsty from the radio interview, I ordered six bottles of beer at the hotel before catching a train home. The Star interviewer shared these with me. In due course the interview appeared and I didn’t mumble. I was witty and brilliant, as always.

A man for all regions

Thank you for an unqualified best-yet in your Referendum Debate series (December 26). As long as we have the sanity and sensitivity of the George Woodcocks of this country to reflect the legitimate regional vitalities and concerns, there will still be hope for us all.

The future better take care of itself

Thanks so much for introducing the New Elite in The Heirs Apparent (January 9). Without your help we might never have had the chance to meet this wonderful group of young folks. It was so nice to hear about Peter Nygard who was a boss by the time he was 12 and now has five ritzy $35,000 cars in various cities of the world. Another new leader we’d all like to meet is Perrin Beatty, past Nixon champion and married to one of Margaret Trudeau’s old roommates. Wow! The grand prize for having arrived goes to a rock impresario

from Vancouver, Bruce Allen, who states: “I’m living in a $300,000 house with a view and I don’t care.” It is reassuring to have such inspiring role models before us in 1978. Now, perhaps we could poll their

views on unemployment, Quebec separation, the RCMP, human rights, corporate responsibility, the world food crisis, or any other of the real issues we shall be facing this year.

I should like to take exception to The Heirs Apparent item on Michael Hepher. “But perhaps more eccentric is the fact that he is running a national company from Halifax of all places . . .” the article reads. Such a comment in a magazine ostensibly devoted to national unity serves to underline one of the major faults of confederation:

I was surprised to read in The Heirs Apparent that Jack Wetherall has cornflower-colored hair. Blue hair? Oh well, nobody is perfect. Thanks for a magazine Canadians can be proud of.

I enjoyed your article on the new faces for 1978 but I feel that you left out a great segment of society that contributes a great deal to the shape the country will take. Is a homemaker a “nothing” class? Judge Abella takes pride in the fact that she “worked up until the day before the births of both her sons.” Every homemaker works up until the births of her children.

I applaud your cover story on The Class of ’78 as it has long been my contention that our youth desperately need models to affirm that Canadians are first rate. Having said that, I must express bitter disappointment at the complete omission of any of the dozens of young men and women in science. There are many young scientists in Canada with international reputations who should be inspirations to all Canadians. It seems ludicrous to me that, in trying to come to grips with the vast changes and pressures taking place in Canada, you look to politicians, lawyers, businessmen and athletes. Yet the birth control pill, nuclear fission, television, satellites, plastics and antibiotics have done far more to revolutionize our lives.

After reading The Heirs Apparent (January 9) I see that overt sexism still exists in Canada’s “leading magazine.” Do you realize that out of the seven women written about, five of the articles had physical descriptions of the women (the other two had accompanying pictures), whereas, none of the 15 men mentioned had their physical appearances discussed. The exceptions were Jack Wetherall, the actor, and the punk rock group, the Diodes, both of whose appearances are a great part of their work. How does “attractively blond” af-

feet the work of a politician; “slight, softspoken” relate to the qualities of a Crown prosecutor; “long legs . . . tiny heartshaped face” reflect the work of a judge; “ambitious, attractive” affect a clinician’s work; and “flaxen-haired Lugar looks a bit like a young Anne Murray,” how is that going to affect Judy Lugar winning her race or not?

Maclean ’s wake up! It is no longer a prerequisite for women to be ugly to be successful ... and so what if they are?

Something nice for a change

How nourishing to watch Allan Fotheringham eat some of his words about Joe Clark in Hey, Man, Have You Read Hansard? No . . . But I Saw The Show! (December 26). Not bad, for what appears to be a first attempt. It is to be hoped he is growing up and won’t need quite so much sugar to get them down the next time.

A non-solution to all our problems

I found that George Woodcock’s If Confederation Is Indeed Doomed, Blame Those Who Perverted Its Meaning (December 26) was not a constructive contribution to the Referendum Debate. His ideas would see our country reduced to a type of “commonwealth” of countries. How else can the phrase “between Quebec and several autonomous English-speaking Canadas” be interpreted? How long would such a loose, ineffectual arrangement last before various provinces sought more security in the American federal system? Indeed, Wood-

cock’s claim that the nation-state concept is obsolete is strange since he has only to look across the border to see it working.

Our present system needs modifications and no one has disputed this fact. The federal government has been attempting to work out formulas to bring about constitutional changes but without cooperation from all the provinces. It will have to institute changes without 100% approval of the provinces. Perhaps a Senate based on the American model will give us the greater regional representation in Ottawa that we seek.

A lot of what it takes to get along?

There was something deeply disturbing about Why Are These Kids So Bullish On Mathematics? (December 12). It is not that I disagree with the modem teaching methods used in the Deer Park mathematics program; no one will dispute the fact that practice is as important as theory and that academic subjects may be usefully applied to everyday life. The idea is good. What disturbs me is not that mathematics is being applied, but that it is being applied in such a crassly materialistic way.

It is a terrible commentary on our society to see that this obsession with money extends to the very base of our school system. The Deer Park classroom appears to represent the ambitious North American

society in microcosm. Here we see “tomorrow’s economic and social elite” learning its fundamental values. Bond issues are being checked, investors are being “rustled up,” chic townhouses are being bought, and lawyers’ fees are being discussed. Remarks range from “$100 per hour, is that all?” to “I’m going to be a millionaire one day, you know.”

Brave new world that has such people in it.

The armies of the slight

I read The Sky’s The Limit (December 26) and I feel that if the military is deemed necessary, let’s have it, not a marginally manned, overcommitted body holding together the remnants of a basically 1950equipped service. In spite of this, the Canadian Armed Forces is doing an outstanding job, but we hope for realistic funding for re-equipment and sufficient manning to do that job. Whether sailor, airman or soldier, we are still people and need the tools of our trade and the support of our employers, the people of Canada. The real choice is either to support the military or let the whole works go and graciously disband.

Forces should purchase the newest in multimillion-dollar monorails. Not only would this boost the country’s economy, but it should also prove very capable in stopping the Soviet Mig-23 fighters.

Bite two bullets, call me in the morning

The Doctor Is Out (December 26) on Dr. William Kyne seems to imply that the community of Prince George supported him during his convalescence—“just the spot for me.” But now it seems there is no one to support the people of Prince George. The signs of sickness—or is it something else—seem to be everywhere. Where is the cure?

How discouraging to find yet another article by our national magazine depicting Winnipeg as yahoo-land. I refer to The Artist Struggles On (November 14). If Winnipeg were really yahoo-land, do you think we would have in the Royal Winnipeg Ballet the oldest ballet company in the country, or in Contemporary Dancers the first professional modem dance company in Canada? Why not celebrate the spirit of Arnold Spohr and others who have worked to overcome our isolation by creating a lively cultural history. 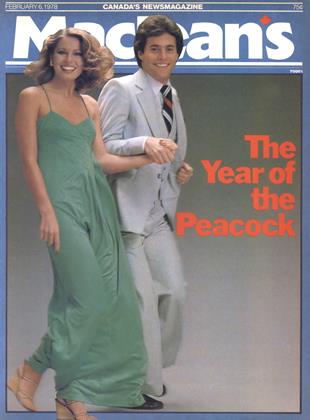