Davey, O’Hagan and Coutts. Sounds like a double-play combination in the ThreeEye League? A plumbing outfit perhaps? A juggling act on The Gong Show? A small law firm in an Eastern Ontario town that still has a Gyro club, the CGIT and one QC in the territory who, unfortunately, drinks?

Davey to O’Hagan to Coutts of course is the sleight-of-hand gang assigned to slip past your unwary ballot that master of masks, the prime prestidigitator of our time, Pierre Easily Trendeau, in the election aborning. Knuckle-ball artists, all. They’d never steal a hot stove or a boxcar (unless Tom Cossitt was inside).

Senator Keith Davey runs the Natural Governing Party, also known as the Liberal hegemony of Canada. He is gifted with the wisdom of Methuselah and the tailor of Nathan Detroit. He is a large morose man who wears sideburns like war paint. He is from Toronto and has never tried to overcome this basic weakness. Dick O’Hagan,

Director of Propaganda in the Prime Minister’s Office, wears a thinning Brillo pad for hair. He has a perpetual air of daytime worry though he is more relaxed at night, when his Irish nature escapes the mental straitjacket of his earnest surroundings. Jim Coutts, principal secretary to the PM, is pink and scrubbed out of a Johnson’s baby powder ad, a backroom fixer who looks as if he’s just trotting down to the corner store, sent by his mother for a pound of bacon. The butcher would take care to count the change, for fear he’ll lose a finger.

All three are leftovers from the Pearson years, all passionate in the belief that the world will rot and wither away, the soil will turn putrid, small children will grow faint and rickets will infect the adults unless the Liberals are returned to power. Forever and ever. Amen.

All three are in charge of marketing this strange commodity called Trudeau who is detested in large parts of the country yet at the same time is running ahead of his stale, tired party with a cabinet that acts like an accident-prone revolving door. Luckily, I have been able to obtain a copy of their battle plan. It was retrieved from a vichyssoise-stained napkin found in the fourth alcove of The Canadian Grill, a subterranean retreat in the basement of the Chateau Laurier which serves nostalgia and other ancient sundries.

The battle plan of the firm of Davey,

O’Hagan and Coutts for the election of 1978—celebrating a decade of rule by Himself—is quite simple. It has three elements: (1) personality of Himself. (2) manipulate the media. (3) point at Joe.

On the first point, the plumbing crew is dealing, essentially, with a piece of Plasticine. Mr. Trudeau has more faces than Marcel Marceau. In his 1968 victory, we had Kissing Pierre, the bannister-slider. In his near-defeat of 1972, we had the Don’tCare Pierre, the philosopher-thing. In his

1974 triumph, we moved on to a concerned, vigorous statesman, full of ridicule for Stanfield’s ridiculous wage and price controls idea.

The PM, for all his worldly arrogance, is as innocent as a babe in the vulgar realm of electoral strategy and since the firm of Davey, O’Hagan etc. came back to save him in 1974, he has little choice but to surrender to their grip. We await with interest the new Marcel Marceau to come out of the gate. Trudeau’s abiding sin is that he has the languid boredom of the definitive dilettante, he is bored except when he is in a fight (how many votes does one gain by blowing kisses to striking postal workers? Plenty, one suspects.) He has that lean and hungry look again, he has that election haircut and the firm’s plan is to demonstrate an angry tiger at bay. Soup him up. Get him mad. Mad Plasticine.

On the second point, the Natural Governing Party discovered a valuable lesson in 1974. While most of the major newspapers in the land (even the liberal ones) opted for honest Bob Stanfield and the columnists and commentators went the same way (mainly in idealistic hope for a

change), the plumbing firm realized how muscle-bound were the front pages. That a major announcement of yet another Liberal “promise,” timed for key deadlines, would always rate heavy headlines for the mere fact that there was not time to check it, refute it, counter it or reject it. The Liberals were losing on the commentary pages, but they controlled the front pages. (How many times has that waterfront park in Toronto been promised? Rail line renewal on the Prairies? Harbor reform in Vancouver? Each time, each election, new headlines.) The announcements, the promises, the speeches, made the news.

This year there is a counteroffensive against the critical press. Radio-Canada is so intimidated by the charges of separatist infiltration that it alone carried live all the sessions of the First Ministers’ conference, which was essentially a Liberal preelection media event. The English network of the CBC is also nervous, as witness the Prime Minister turning a Newsmagazine broadcast of the Liberal convention into a free-time political broadcast.

The third aspect of the battle plan is to emphasize a comparison between Trudeau and Joe Clark. Don’t compare the PM with God, goes the line, compare him with the alternative. “We haven’t done too well,” Jean Chrétien will tell the voters, “but the other choice is awful.” The defense mechanism for the fact Trudeau has only three real functioning politicians left in his cabinet (the case-hardened Allan MacEachen, the lugubrious ward aiderman Don Jamieson and the mercurial Chrétien)is to point out at every chance the number of Dief remnants Clark would have to take into his cabinet. It’s not necessarily true, but the Libs will hammer it.

But mainly it will be a campaign fought on three points: (1) play humble (shucks, we’ve tried hard). (2) manipulate the tongue-tied media. (3) point at Joe. 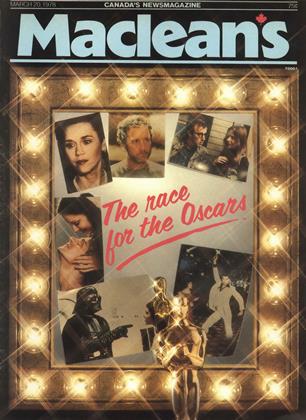