On Monday morning, February 20, Gerald Bouey, governor of the Bank of Canada, strolled from his Wellington Street office across the road to Parliament Hill for his regular weekly meeting with Finance Minister Jean Chrétien. As the man responsible for the safekeeping of the nation’s money, Bouey was concerned: the week before, the Canadian dollar, which had seemed to be holding steady at 90-91 cents (U.S.), had dropped to 89.37 cents, its lowest level in 45 years. But Bouey and Chrétien decided to continue their policy of letting the dollar “float” on the world’s currency markets. Bouey went back to his office and Chrétien went to the Commons to face down demands for action.

But the dollar kept falling, dropping be-

low 89 cents. The Bank of Canada, alarmed at the turn of events, intervened in the markets with a big order for Cánadian currency, bidding the price back above 89 cents by the end of the day. On Tuesday, however, heavy selling of Canadian currency resumed and the Bank was again forced to purchase dollars with foreign currency to prevent a precipitous drop. In just two days, Canada’s foreign exchange reserves, the government’s holdings of gold and foreign currency, had been depleted by an estimated $250 million in an effort to hold up the dollar. Clearly, this could not continue. But, if something were not done to support the dollar, it might drop to 85 cents or even lower in a panic run fed by speculation.

Bouey saw Chrétien again Tuesday morning and laid out the options. A hike in

interest rates would stop the slide, but it would also slow down the country’s economic growth and perhaps throw still more people out of work. An austerity program complete with exchange controls seemed even less palatable during an election year. Chrétien decided instead on the much less drastic step of borrowing money abroad, the first such move by the federal government in 10 years. Announcement of the borrowing plans stopped the slide, at least temporarily, even before any money was actually lent, and the dollar closed the week at 89.7 cents. Whether the move would have any lasting effect remained to be seen.

Business reaction to Chrétien’s announcement was mixed, but the opposition Conservatives were unequivocal in their scorn. They seized on the government’s predicament with glee, just as the Liberals had done 16 years before when the Diefenbaker government of the day was faced with a similar crisis and devalued the dollar to 92.5 cents. (“Diefendollars,” the Liberals had jeered.) Conservative Leader Joe Clark demanded— and got—an emergency debate in the Commons and proceeded to lambaste the government for the sorry state of the economy. Chrétien shot back that Clark was being irresponsible and scoring “little political

points” at the country’s expense by painting doom and gloom images of the economy. The echoes from 1962 were unmistakable.

As the emergency debate droned on into the early morning hours, it began to deteriorate. In one of his less distinguished performances, Conservative MP Allan Lawrence, former attorney-general of Ontario, called Chrétien a liar and repeatedly mimicked the Finance Minister’s heavy French accent and manner of speaking out of one side of his mouth, the result of a childhood illness. In turn, a seething Chrétien questioned Lawrence’s sobriety.

All the smoke only served to obscure what was really happening, which was none too clear to begin with. No one seemed sure what had triggered the latest decline in the dollar. Clark blamed it on Chrétien’s “street-fighter” approach to politics; Chrétien suggested that the Tories were to blame for spreading a rumor that they were going to blow open another government scandal; NDP leader Ed Broadbent said the fall of the dollar was “more or less a direct response” to the faceless, nameless, gnomish Zurich speculators.

More easily explained was the longterm slide of the dollar from a high of $ 1.03 in 1976 to its present level. Quite simply, Canada has been running a huge deficitmore than four billion dollars—in its international payments in each of the last three years. That deficit results from heavy travel abroad by Canadians and from increasingly high interest and dividend payments to foreign investors. Remarks NDP MP Stu

Leggatt: “We are paying the absentee landlords too much rent.”

Indeed, Canada now owes the rest of the world more than $50 billion, a colossal sum that, on a per capita ba^is, exceeds the debt of any other major industrialized country. Profits earned on exports used to offset this debt, but now Canada is in the uneasy position of borrowing money just to pay the interest—naturally a source of increasing concern in Ottawa.

To an extent, the problem is self-correcting. As the dollar falls in value, imports and foreign travel become more expensive and less attractive to Canadians, while exports become cheaper and more desirable to foreigners. But a falling dollar also boosts the inflation rate, setting off new wage and price hikes that make exports more expensive again. At the same time it makes debt repayment even more expensive. Thus, some economists oppose devaluation as a means of setting the economy right in the long term.

There is also an irrational element in opposition to a devalued dollar. Many Canadians think their dollar should be worth the same as the u.s. dollar and, when it is not, believe something is wrong. Thus, the pejorative adjective “weak” is used to describe a 90-cent dollar. “We should have called the dollar something else,” laments economist Eric Kierans, the former cabinet minister and advocate of an 85-cent dollar.

The dollar may yet fall to 85 cents. The Bank of Canada and the government insist are not trying to it at 90 cents, al-

though they have intervened twice, once last October and then again last month, when it appeared to be slipping significantly below that level. On both occasions, they say, the intervention was aimed at restoring confidence to a panicky market. And, on both occasions, they rejected the more permanent prop of higher interest rates.

This reluctance to raise interest rates has baffled some analysts in recent weeks, but is entirely consistent with the Bank’s “monetarist” approach to the economy, adopted under Bouey. Under this approach, popularized by American economist Milton Friedman, the Bank allows the exchange, interest and unemployment rates to find their own levels. It concentrates instead on controlling the money supply, the measure of all the currency in circulation and money in checking accounts. Once the money supply is under control, say the monetarists, inflation will be curbed and, because they see inflation as the root cause of uftemployment, the number of jobless will be held in check as well.

Monetarist theories used to exist only in textbooks. Keynesian economists, who see unemployment as the prime target of public policy, represented the orthodox view and held government office; monetarists were considered weirdos and lectured in universities. Bouey himself used to debunk monetarism. But that was before the combined inflation-recession of 1974-75. After that economic horror, Bouey and others began to look again at monetarism.

The Bank of Canada adopted a monetarist approach with little fanfare in mid1975. “For more than 20 years almost every country in the Western world has given rapid growth and high employment much higher priorities in its policies than the preservation of the value of money,” said Bouey in a subsequent speech. “This approach worked well for quite a while, but it won’t work well any longer.’-’

Milton Friedman was delighted with his new convert. “It is a mafvelous speech,” he gushed. “It is the best speech I have ever heard a central banker give ... I could have written it myself.”

Such fulsome praise from the monetarist guru irks Bouey because of the implication that he himself is a monetarist. He eschews the label and says the Bank's embrace of monetarism was “pragmatic rather than doctrinaire” and subject to change if interest rates or unemployment get out of hand. It has often been said that is not possible to adhere long to a monetarist policy in an open economy like Canada that depends so much on trade. Sooner or later, the critics say, the Bank will have to raise the interest rate in the face of a falling dollar regardless of what monetarist doctrine prescribes. The next few months should provide the test, and show where doctrine ends and pragmatism begins in the Bank’s new approach, &LT;dc:creator&GT;IAN URQUHART&LT;/dc:creator&GT; 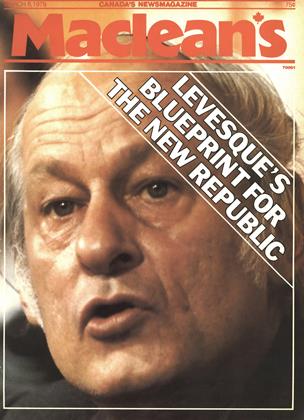