Canada is the largest single market for Hollywood movies outside the United States, and the Canadian film industry— still a fledgling some dozen years after the government decided to support it—is just about the only one in the world that remains unprotected by quotas or box-office taxes in its home market. So when Secretary of State John Roberts tabled his film policy in Ottawa earlier this month, he was expected to include substantial provisions to help finance, produce and exhibit Canadian films. Roberts generated the expectations himself when, 18 months ago, he replaced Hugh Faulkner and tossed aside the latter’s evidently limited commitment. But Roberts delivered a policy that in many ways is a shadow of Faulkner’s— and a bitter disappointment to the feature film industry.

Roberts even avoided calling it a “policy” and referred instead to “an adjustment to an ongoing film policy.” Statistics Canada reports 96% of all screen time goes to foreign films; Roberts’ “adjustment” may reduce that to, say, 94% but it will do little else. What has upset the industry even more is a leaked government document revealing that Roberts had in fact written the strongest policy ever, but when his proposals were submitted to the cabinet last November they were emasculated. “The policy went into cabinet a lion and came out Kitty Litter,” says Peter Pearson, a film maker and former president of the Directors’ Guild of Canada.

Roberts’ ambitious scheme had called for a 10% tax on the income of foreign film distributors, a measure that would have doubled the three million dollars invested annually by the Canadian Film Development Corporation. Roberts had also proposed to make as much as five million dollars available to Canadian investors who intended to buy the Odeon Theatres chain, the country’s second largest, provided they agreed to show a substantial number of

Canadian movies (the chain was recently acquired by Canadians, but without help from the Secretary of State). Both measures were rejected outright by an opposition apparently led by Finance Minister Jean Chrétien, who has declined comment. Roberts now feels it prudent to deny they were ever considered—even though the document acquired by Maclean's has been verified by several other sources.

Faulkner never made any secret of his philosophy “to support Canadian without interfering with American interests.” Roberts’ policy apparently foundered on the contradictions inherent in that philosophy. Certainly, little pressure appears to have been brought by the Americans themselves. A U.S. state department source told Maclean's that they’d known about the 10% tax but had also known it would never pass—“so we only had a junior officer call the [Canadian] Embassy to tell them we wouldn’t much like it.”

Roberts’ most significant change permits the CFDC to participate in financing made-for-TV movies and even provides one million dollars to do so. But Roberts has not extended that to participation in TV series, which are generally shorter than the features the CFDC is obliged to make. Another million was given for the CFDC to im-

prove Canadian film-making skills and to set up a network for distributing Canadian films “in theatres, school halls and other auditoria,” showing how little faith the government has in foreign distributors and major commercial exhibitors.

Roberts has asked that they voluntarily undertake to show and distribute Canadian films more widely at home and internationally, and called for the voluntary quota on Canadian films—four weeks per theatre—to be extended on a per-screen basis in theatres with more than one. Fie also asked the major American producers to invest—again voluntarily—in Canadian features. The results of his attempt at voluntary controls will be weighed after 12 months, Roberts says, with the possibility that a tax may be imposed if the results aren’t satisfactory. Not surprisingly, industry reaction was, “This is where we came in.” KASPARS DZEGUZE 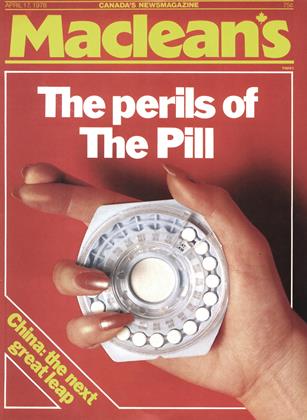