Are the Expos finally A Team Of The Future? ROY MACGREGOR April 3 1978

Perhaps Tom Lasorda would rather be Don Rickies than what he is: manager of the Los Angeles Dodgers, the 1977 National League champions. A steamy pot of a little man on which everything—eyes, nose, chin—seems to have boiled over and settled in layers, Lasorda carries a bully humor he swings like a mace at anyone within range. His team had come to Daytona Beach for an exhibition game with the Montreal Expos, and Lasorda was in midseason form as he ripped into the baseball credentials of a local sportswriter, a humiliated older man with a face like a stoplight.

“But 1 picked you last year ...” the man mumbled in defense.

Well out of earshot Charlie Fox sits in the shade of a Panama hat. He is a believer himself, not in the Dodgers but in the Expos, partly because he has to be—as the team’s general manager—and also because there is finally some evidence that doesn’t necessitate being on the payroll to See. There were, quite simply, no believers back at the end of the 1976 season when Fox took over. When the final game ended with the celebration firecrackers going dud in the rain it seemed, if nothing else, completely appropriate. The Expos 107 losses added up to the worst record in all of major-league baseball.

In the late summer of that year Charlie Fox, then an Expos’ scout, was assigned to file a scouting report on the players of his own team. So devastating had that report been—given orally, not on paper—that it probably helped lead to the firing of one manager—Karl Kuehl—and the eventual hiring of another, Dick Williams. Fox became vice-president and general manager and was given a vat full of Charles Bronfman’s money to put a quick end to the eight-year-long embarrassment of the Expos.

One change didn’t cost a cent. Under Gene Mauch and later Kuehl, the Expos had been the straightest, most disciplined team in baseball. But, argued Fox in his lingering Bronx accent, “There are no malted milk drinkers in the hall of fame. I don’t give a good goddamn if a player’s got hair down to his navel, a pink suit on and a ring through his nose.” As if to emphasize the point this past winter, Fox bought aging infielder Tito Fuentes, an eccentric Cuban who has been known to take his baseball ailments to a witch doctor, but who hit an impressive .309 for Detroit Tigers last year.

And another change came cheap when the Expos’ farm system matured into one of baseball’s best. Catcher Gary Carter (31 home runs), pitcher Steve Rogers ( 17 wins) and third baseman Larry Parrish all came up through the Expos’ system, as did the entire outfield, the youngest—and many say the best—in baseball. Ellis Valentine, only in his second year, had 149 hits and 25 home runs; André Dawson won the league’s Rookie of the Year award; and Warren Cromartie was runner-up.

It was what Fox did with money, however, that gave the team a depth it had never known. For $1.5 million over five years he added Dave Cash at second. A trade brought Tony Perez to first. Another trade got rid of ill-tempered shortstop Tim Foli and brought in Chris Speier, who proved to be friendlier as well as superior. Finishing fifth in their division doesn’t sound like much—and it wasn’t—but the Expos did improve their record to 75 wins, 87 losses. Something was still missing— pitchers. “We knew we could score runs,” says Andrd' Dawson. “The question was

'how many we would give up.” So over the winter, at huge expense, Fox added two lefthanders from Baltimore, Rudy May and Ross Grimsley. And that—plus the many other manoeuvres Fox had instigated in his 18-month tenure—meant that the Expos, on the eve of their tenth anniversary, were about to field Montreal’s first, legitimate big-league contender. “Charlie Fox has done a hell of a job,” says Dick Williams. “Now it’s up to us to win some ball games.”

But Fox can enter the new season with confidence. With a humbled Tom Lasorda watching—quietly—from the Dodgers’ dugout, superb Expos pitching and home runs by Perez, Valentine and Dawson added up to a convincing 7-2 defeat for the Dodgers. There were believers there that afternoon, all right—the first the Montreal Expos have known in 10 unbelievably, lonely years. ROY MACGREGOR 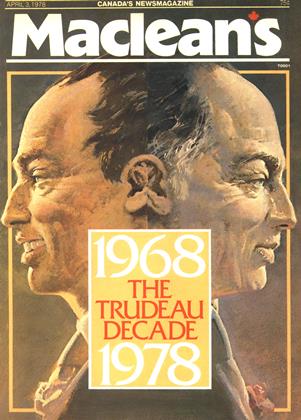