The third man in the ring GRAHAM FRASER May 1 1978

When the cheering, chanting and flag-waving at the Quebec Coliseum had sub-sided into memory last month, it was clear that the presence of Claude Ryan has totally altered the theatre of Canadian politics. From the beginning of his successful campaign against Raymond Garneau for the Quebec. Liberal leadership, Ryan’s metamorphosis from publisher to politician had already caused considerable effect in Quebec. It coincided with—and probably contributed to—a drop in popularity of the Parti Québécois government. More and more people now seem to be taking it for granted that Ryan will win the referendum and the next election.

Certainly, for the first time since November 15, 1976, René Lévesque has an opponent of his own stature. But so does Pierre Elliott Trudeau. Ryan has been equally critical of both men over the years, and already he has forced Trudeau to admit that Quebec nationalism can be a positive force. “There is some good nationalism, and there is some bad nationalism, and I’m prepared to make these distinctions," the PM told his Mount Royal constituents late last month. “So God bless good nationalism—but God help us from bad nationalism!" Given the bitterness that existed between the two men during the October Crisis in 1970, Trudeau's concession was especially noteworthy.

The conflicts involve more than mere personality differences. Ryan’s victory will almost certainly mean a return to the kind of vigorous demands for greater provincial powers that characterized Jean Lesage’s Liberals in the 1960s—a stance that Trudeau rejected by opting for a more rigid federalism, and that Lévesque abandoned in choosing the ambiguous goal for Quebec of political independence and economic association. Ryan’s victory over the anti-nationalist, free-enterpriser Garneau means that the Liberal party is committing itself to the kind of Quebec nationalism that former premier Robert Bourassa obscured and Garneau wanted to reject. It has elected a leader who also has serious doubts about the party’s move toward right-wing, free-market economics which dominated last November’s policy convention.

English Canadians who rejoice that Lévesque now has a vigorous opponent should not have any illusions that Ryan— or Quebec—will be easier to deal with if Ryan becomes premier. Fle is a stubborn, strong-willed, complex man who can be, in turn, austere and vain, gracious and unforgiving, studiously rational and suddenly temperamental.

Moments before the April 15 results were announced, a young French reporter peered into the smoky haze of tele-

vision lights at the Coliseum and asked facetiously, “Fias the puff of white smoke gone up yet?" While the sea of cheering Liberals waving red and white scarves, pennants and signs bore no resemblance to the College of Cardinals that chooses each new Pope, Ryan inevitably provokes religious metaphors among his observers. Fie claims to find the comparison tiresome, but if the references really annoy him his campaign song rang passing strange: its tune was a spiritual-pop hit of the 1960s called Amen. Part of his appeal is linked to his ecclesiastical style. Fie speaks with an accent de curé, he worked 17 years for L 'Action Catholique Canadienne until he joined Le Devoir in 1962, and his meticulous intellectual reasoning and sober moral vision have inescapable religious overtones.

“Fie has an image of maturity, strength, stability, serenity and continuity," observed Michel Robert, a Montreal lawyer who was active in persuadí ng Ryan to run, and in helping him win. “People are looking for a new morality and a new moral leadership. They believed they had found it with Lévesque, and they were disappointed. Ryan offers a set of values that pleases many people who want reassurance." However, it was clear that forgiveness and reconciliation with the Garneau camp were not at the top of Ryan’s

list of priorities. Some of the Garneau campaign’s tactics had infuriated Ryan (one message to delegates called him a carbon copy of Lévesque and a pink Marxist) and his anger had obviously not subsided.

His coolness was made all the more obvious when Garneau, despite some of the sleazy pre-convention tactics of his organizers, succeeded in performing at the convention with impressive dignity and grace. In contrast, Ryan was icily correct with his defeated opponent, even putting into question whether Garneau would continue as the Liberals’ finance critic (after some humiliating hints were put about that he might not, Garneau did get the job of criticizing the PQ budget).

Garneau has consistently denied suggestions that he might enter federal politics were he to be defeated. However, he emerged from the convention with his reputation enhanced, and the possibility remains. Ryan seems unlikely to make efforts to retain him, and Garneau could gain no comfort from the recollection that the last time Ryan won a two-way contest—to be publisher of Le Devoir in 1964— the loser, Jean-Marc Léger, soon left the paper. GRAHAM FRASER 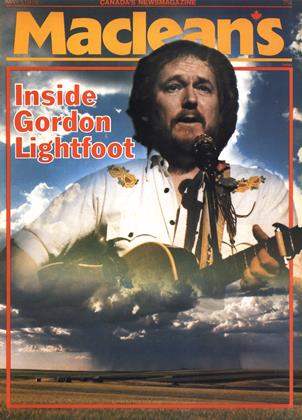