Whether or not it affects the outcome of the forthcoming federal election, one especially charged and visceral issue will be hanging. Ever since Parliament abolished the death penalty for the murder of policemen and prison guards in July, 1976, there has been an intense national howl. The latest Gallup poll shows 68 per cent of Canadians favor the return of the noose, while 82 per cent at least want a national referendum on the issue.

Once the election campaign begins for real, the 48,000-member Canadian Police Association plans to open a $250,000 newspaper ad campaign aimed at forcing candidates to take a public stand on reinstating

the noose for premeditated murder. “The issue,” complains association executive officer Dennis Latten, “was never determined on the basis of majority opinion in the country but by a majority in the House of Commons.”

Conservative candidates across the country have already been speaking out. In Ottawa Centre, Robert de Cotret, one of Joe Clark’s star candidates, is best known as an economist, but he drew the biggest cheers at his nomination meeting when he declared himself in favor of hanging. In New Westminster,

the effective New Democrat MP Stuart Leggatt is in a tight race, partly because

Marg Gregory, is an ardent retentionist. In St. Catharines, Ontario, incumbent Liberal Gilbert Parent, who voted for hanging after a poll of his constituents, recently was given a rousing ovation at a meeting of 800 police.“They were jumping on the tables,” exclaims Parent. “You’d think I was a stripper.”

The pro-hanging sentiment is fueled each time there is a celebrated murder.

King in Saskatoon last month, the seventh cop killing this year. Two teen-agers were arrested after King’s body was found in the South Saskatchewan River, and the account running around freely in police circles is that King was jumped after routinely stopping a car, secured with his own handcuffs, then shot twice in the head with his own revolver.

In Ottawa Prime Minister Trudeau shows no signs of bending to the pro-hanging lobby. While he says he “can't complain” about the cops’ campaign against abolition, he insists: “We don’t plan to reopen it.” Clark, an abolitionist like Trudeau, is less categorical. With so many of his candidates espousing the retentionist cause, Clark allows that he would agree to a free vote in Parliament on the issue—so

long as a private member on his backbench makes the first move to introduce a bill. If the Conservatives win the next election, Clark can count on that. Then he would face the classic abolitionist agony— sending the first person to the gallows since 1962. 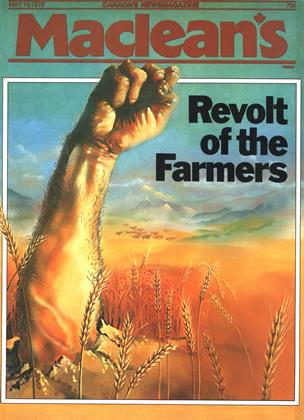