The RCMP: getting at their dirty tricks ROBERT LEWIS May 29 1978

Come summer, the privileged caste which runs the country from Ottawa’s elmshrouded Rockcliffe village will welcome a new family—the David McDonalds of Edmonton. Over the past 10 months of the inquiry into alleged RCMP Security Service (SS) irregularities. Commission Chairman McDonald grew weary of hotels too far from his hearth. His arrival as full-time capital resident seems only fitting since, after a rocky start, the commission with a beefed-up staff has settled in as one of the town’s engaging institutions. Commission critics, which are legion inside government, insist that the inquiry, in fact, is so entrenched that it will be years before it reaches any conclusions.

The criticism is a turnaround from the bleak months of early winter when the three-man inquiry was dismissed as a Liberal-leaning whitewash.* McDonald concedes that the skepticism was “like running your arm along a stucco wall—it was abrasive. But,” he adds, “I got over that.”

What the commission has yet to get over is the Vesuvian flood of secret Telexes, coded instructions and policy papers produced by the RCMP before the inquiry— ironically, many of them bearing the stamp: WARNING . . . YOUR TELEPHONE IS

NOT SECURE ... NOT TO BE DISCUSSED OVER THE TELEPHONE. After 56 days of hearings (45 of them in public) the commission has

* McDonald, an Alberta Supreme Court judge, is a former president of the Alberta Liberal party. Commissioner Guy Gilbert, a Montreal lawyer, is a member in good standing of the upper-Outremont LiberaI Mafia.

examined five subject areas: mail opening, surreptitious entries, “recruitment” of sources, a raid that secured Parti Québécois membership lists and the caper that started it all, the 1972 break-in at l’Agence de Presse Libre du Québec in Montreal. So far the inquiry has only begun to learn who did what to whom—and why (see chart). It has plodded through evidence from a series of burly ss field agents who took part in a variety of exotic breakins, buggings and bag jobs. It likely will be autumn before the probe completes its

whodunit examination of agents and turns to those reticent folk who gave the orders and set the policies: the ss director, the RCMP commissioner and the solicitor-general—the ultimate political boss of the shop.

The parallel Quebec government inquiry under Jean Keable, which was actually more advanced than McDonald, was shut down February 21 by the Quebec Court of Appeal which sided with Ottawa and held that Keable violated federal authority by demanding a slew of internal RCMP documents. A hearing of Keable’s appeal started in the Supreme Court of Canada May 23. The suspension, and Pierre Trudeau’s decision not to call a summer election, shifted the spotlight back to McDonald.

Already the commission has produced a sketch of major themes that are bound to form the core of its eventual conclusions, among them:

• Following orders. After the Trudeau government concluded in 1970 that it had been ill prepared for the October Crisis, the ss was given a nudge to crack down on Quebec terrorists. While the government refuses to release the orders, the RCMP concluded that the instructions justified almost any means in the investigation of suspected involvement of hostile foreign nations and groups in the Quebec independence movement. The Mounties claim that Operation Ham, whose target was the PQ membership rolls, was mounted to determine whether foreign revolutionaries

contributed to the party. Trouble is, as ss officers responsible testified, the raid and the results were useless.

• Excesses. Somewhere along the line the pursuit of policy got out of hand. The ss confused genuine subversives with peaceful anti-establishment elements like student groups, labor unions and other organizations such as the New Democrats and the Parti Québécois. There resulted a series of questionable, in some cases illegal, activities, mostly in Quebec, which in theory were designed to “disrupt” FLQ cells or sympathizers. Marital problems, drug use and minor offences were used to turn sympathizers into stool pigeons. People were picked off streets without authorization and hustled away for interrogation in remote fields or motels—“ego deflation” as one member of G-4 put it to McDonald. Donald Cobb, the former ss chief in Montreal, testified: “We made them an offer they couldn’t refuse.”

In one such case operatives from G-4 under Cobb picked up a man in Montreal, drove him to a dirt road off the Montreal/Quebec City highway, and pressed him to co-operate during a session in the backseat of a car. At one point the man made an attempt to leave the car but Insp. Bernard Blier grabbed his arm and locked the door. In another incident ss agents whisked a man off to a north-shore motel outside of Montreal where he was grilled for 15 hours and, at one point, was made to stand facing the walls in a corner of the room. The aim, testified one ss agent, was to create “a certain atmosphere.”

• Morale. The government’s refusal to order an inquiry lasted until ex-ss member Robert Samson blurted out his participation in the APLQ affair during a trial in 1976 for an unrelated bombing incident, and a series of other allegations were made by the media and ex-ss officer Donald McCleery in 1977. Then the newly ap-

pointed commissioner, Robert Simmonds, virtually turned his force inside out to produce the full story from the files for McDonald. The result was a major morale blow to the ss. Suddenly practitioners of the shadowy arts were themselves being investigated by the RCMP and forced, under dismissal threats, to sign statements about their activities. As Sgt. Paul Langlois, a member of the now-defunct G-4 section in Montreal, characterized the reaction: “I

was told 1 participated in a kidnapping, which was a criminal act. When that happens you feel very small. I saw an end to my career.” Concludes one federal official: “The place [ss] is a shambles. It’s like a ship without the captain on the bridge.”

• Training. For an elite force like the 2,000-member ss, admission requirements are relatively lax. Most agents tend to take only an occasional course—one of Samson’s was to improve his memory—and receive little fundamental grounding in the law. One ss agent told the inquiry that when he was promoted to officer, his major preparation was reading the index of the Criminal Code, a copy of which he had to buy for himself. It is little wonder that ss operatives rarely asked for legal opinions of their planned activities.

• Dilemmas. Charged with protecting the security of the nation, the ss operated with few specific guidelines from the government. “We were used to living with irregularities,” testified Donald Cobb, the most articulate defender of ss tactics. He saw himself involved in “secret warfare” where the first thought was “expedience (and) my second reaction is about propriety.” Added Sgt. Claude Brodeur of G-4 in an appearance before Keable last fall: “If I am accused of having done my work under orders, of having sacrificed my family and a normal social life, working without overtime for the silent majority against violence, I plead guilty.”

Determining guilt may not be as easy as it appears at first blush. Mail opening, for

The men who knew too much

In its first 10 months, the McDonald Commission, the suspended Quebec inquiry under Jean Keable and various ministerial statements have provided an outline of RCMP Security Service operations during the early 1970s which appeared to breach the law. The chart below reflects the evidence so far on how far up the command chain knowledge of the incidents extended.

During the mail openings, directors-general were John Starnes and Michael Dare, commissioners were William Higgitt and Maurice Nadon, solicitors-general were George Mcllraith, Jean-Pierre Goyer and Warren Allmand. For all other incidents the director-general was Starnes. Except for Operation Ham (when Nadon was commissioner and Allmand was minister), Higgitt was in charge of the force and Goyer was minister during the other incidents.

example, has been going on in Canada at least since the Second World War. When the old War Measures Act expired in 1954, in fact, then-prime minister Louis St. Laurent objected to the practice, but it continued anyway until 1975. Now, even before the McDonald Commission decides on the matter, the government has introduced a bill to allow the practice to resume.

The model is the 1974 amendment to the Criminal Code which legalized bugging so long as its use was approved by a judge in criminal cases and by the solicitor-general in national security investigations. Evidence tabled by the RCMP before McDonald indicates that, on the criminal side at least, buggings have been a major tool in drug cases and other crimes. From 1964 to 1974 the criminal investigation side of the RCMP made 1,072 surreptitious entries to plant bugs. In the United States during the same period, the FBI reported ¡that it made 221 such entries, ss history is ¡classified, but latest figures released by the solicitor-general under the 1974 law indicate that in 1977 there were 471 authorizations for wiretaps and buggings.

The whole RCMP program labelled “intelligence probes” is another thorny issue. Superficially these are illegal “fishing trips” in which criminal investigators pick locks and enter premises, without authorization, to see if there are grounds for obtaining arrest warrants against suspects. Between 1972 and 1976, according to RCMP documents presented to the commission, there were 418 intelligence probes in the four western provinces.

Beneath the surface, however, determining culpability is more complex. For starters the RCMP argues that in suspected drug or white-collar cases, clandestine entries are often the only way to ensure that crimes are underway (the brewing, say, of LSD, or illegal profit-skimming). The Mounties argue that even if the practice is found to be illegal, it is defensible. The program also has received the tacit ap-

proval of various solicitors-general who were briefed on general outlines. At one such meeting with the RCMP on July 5, 968, according to RCMP files, then-solictor-general John Turner dictated this instruction: “Gentlemen, thank you for very general discussions. No details on files were discussed with me.”

The Trudeau government’s policy, enunciated repeatedly by the prime minister, is that it has no business knowing details of RCMP operations. This stance, without a watchdog committee of parliamentarians or senior statesmen, has been a major part of the problem: the ss has. in effect, made up its own rules as it played the game.

Lack of civilian control is not a unique experience in Canada, or even the western democracies. When Pierre Trudeau was in the Soviet Union in 1971, one of Leonid Brezhnev’s major concerns was that the KGB secret police force tended to take on a life of its own. Brezhnev’s solution, after repeated efforts, was to have KGB boss Yuri Andropov appointed to the ruling Politburo in 1976 where the Soviet leader could keep a closer eye on the clandestine organization. ROBERT LEWIS 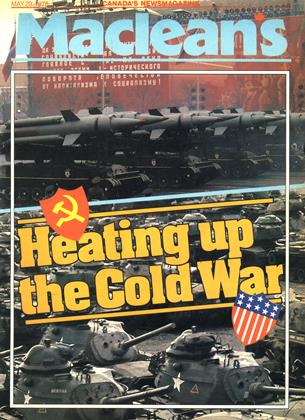