The view depends so much on where you’re standing

In the article, God Bless America (May 15), Maclean’s comments on my April visit to Washington: “His request—made through the Canadian embassy—for a high-level

welcome was refused, but the state department offered to let him see Canadian Desk director John Rouse . . . The fruit of his breakfast with journalists was no juicier: Press coverage was scant.” At no time was it planned that I would use this visit to get a “high-level welcome,” and a request was not made through the Canadian embassy. My assistant, Deputy-Minister Richard Pouliot, met Rouse but this meeting had no relation at all with the alleged refusal I am supposed to have suffered. As to the press coverage of my breakfast speech, there was nothing scant about it. I was told

there were slightly more newsmen than usual for this type of gathering.

Maclean ’s stands by its story.

Thank you for the story. Schizophrenia and the Penicillin Connection (May 15). 1 wish to point out that the clinical study of penicillin was conducted by Dr. Guy Chouinard. Without his enthusiastic help the project would have been impossible.

He’s not a failure, he’s a dropout

In his column, Joe and Pierre . . . (May 1), Allan Fotheringham states that Joe Clark failed law school. I took the liberty of checking with the registrar here at Dalhousie University and was told that Clark successfully completed his year and was eligible to continue his law studies if he had so wished.

It takes two to tango

In his Referendum Debate column, Why Must Politicians Drag This Most Vital of Issues . . . (May 1), Léon Dion says that Quebec is “determined to gain nothing less than perfect equality.” He goes on to make it clear that this means equality of Quebec with the other nine provinces combined,

Roy MacGregor’s sports column, And Now Here’s the Sports News ... (April 17), raises questions that would embarrass most sportswriters in our country. It certainly made me stop and think about some of the procedures I use in my daily operations. Far too many writers see their function as “promoters,” instead of “reporters.” About MacGregor’s comments I say, “Hear, hear!” I hope it has caused some of my colleagues to stop and reflect on their approach to their craft as well.

Hurrah for Barbara Amiel for her column on censorship, Anyone Who Supports Censorship Be Warned.. .(May 1). It points out the most important problem: that censors are almost universally unqualified to make artistic pronouncements. The simple reason for this is, I think, that anyone qualified to make artistic pronouncements would not be a censor. The idea of a good film critic banning Louis Malle’s Pretty Baby is absurd. How more absurd for the Ontario government to ban a film it did not see.

Subscribers’ Moving Notice Send to: Maclean’s, Box 9100, Station A, Toronto, Ontario M5W 1V5 I'm moving. My moving date Is___ _ My old address label is attached. My new address Name is on this coupon. (Allow 6 weeks for processing) _ □ I would like to subscribe to Maclean's. Send New Address me 26 Issues for $9.75 ($14.75 outside Canada) City - Prov. □ Pleased,lime DlencloseS________ Postal Code Please remember that your ATTACH OLD ADDRESS LABEL HERE postal code and apartment AND MAIL IMMEDIATELY! number (if applicable) are essential parts of your I also subscribe to ( ) Chatelaine and/or ( ) Miss Chatelaine address. and enclose old address labels from those magazines as well. J99

I feel that Barbara Amiel has been brainwashed by the American media, which equates freedom of the individual with doing whatever one likes. This is heralded as the Western ideal. It is not, however, and never has been, a Canadian ideal.

I would like to add words of praise to Barbara Amiel’s article on censorship. There is nothing so blatantly repulsive as a board of sore-tummied prudes taking away the liberties of not only liberal-minded citizens, but of all citizens. Let’s call a halt to this obnoxious censorship before sex is back in the gutter where it doesn’t belong.

It is good to find Barbara Amiel expressing the thoughts of the broad-minded Canadian—an endangered minority—on the subject of censorship. If only our censors had something better to do, such as creating art instead of destroying it.

Allan Bailey’s article on space colonization, Take a Giant Step (May 1), was very interesting and informative. However, I

have always thought of space exploration as a sad waste of time, money and energy. Can’t we take a few small steps backward? We are burning ahead so fast, we don’t

stop long enough to pick up the garbage left on our trail, to replant the life we mowed down. We should be spending more time on making this a good place to live, rather than on taking giant steps into space.

I feel your article. When Mother A nd Child Are Not Doing Well (May 1), left the impression that Toronto does not have perinatal facilities. Such is not the case. A special unit for handling high-risk pregnancies has been in existence in Toronto since 1970 in the Women’s College Hospital. This perinatal unit handles emergency cases from the Toronto area and also communities as far away as Timmins to the north, Cobourg to the east, and Georgetown to the west. The facilities for resuscitation and intensive care of newborns are available alongside the delivery area so that sick infants can be spared the dangerous journey to other units.

Well, the reed bent with the wind ...

I found the interview with Conor Cruise O'Brien (May 1) rather startling. He comments that apartheid still exists at the regular level of South African life, but at the top it has gone. He goes on to back up his statement with very flimsy evidence: “I actually saw a black man coming in the door of the Carlton Hotel with his arm around a white woman ...” I fail to see how the Afrikaners, in an attempt to convince themselves and others that apartheid is all true are making that policy of separate development come apart.

Let us reason together

Three cheers for Margaret Laurence for her Referendum Debate column. Quebec’s “Freedom” Is A Vital Concern . . . (April 17). Maclean’s has discovered a Canadian with a rational view of the problems confronting our two founding peoples—a Canadian who not only expresses her rationality eloquently, but forcefully as well.

Going to the horses’ mouths

In her article on Fil Fraser, One-Man Show (April 17), Suzanne Zwarun quotes an unnamed Western stage and film director who says, “If you ask anyone back East who made Why Shoot The Teacher, they’ll say it was CTV’s Larry Hertzog. Out West, we all know it was Fil Fraser.” If your correspondent had thought it fair journalistic practice to ask anyone, she might have asked the only people who really know and count—all of the other people who worked on the film. 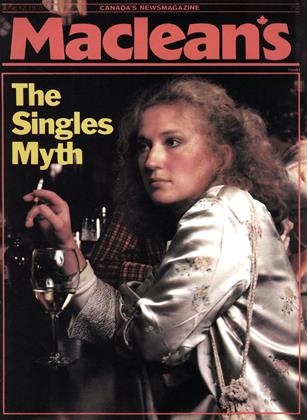