Laugh and the world laughs with you, frown and they'll know you're Canadian Barbara Amiel June 26 1978

Margo Scott, Ontario Chairman for the Canada Week Committee, stood tippy-toe behind the lectern, poised and ready to make the great leap forward into Unity-InWonderland. “The response to Canada Week in Ontario has been wonderful,” declared Mrs. Scott. “At least three million Ontarians will be involved in the picnics and folk dance programs that are bringing

Canadians together at grassroots level. And [here Mrs. Scott paused expectantly] that’s almost half Ontario’s population, but we count those Ontarians who will stay at home but might accidentally tune in to coverage of a Canada Week event on radio or television, then I think we can say everyone is participating.”

The room full of journalists and unitycrats remained disappointingly silent at news of this unanimity. Behind the bar in one corner of the conference room, a devastatingly pretty FrenchCanadian girl rattled glasses, muttering: “Fous! these people are crazy, but maybe I just don’t understand enough English. Me,

Mrs. Scott was undeterred. She had more sprightly plans aimed at keeping Our Land together.

The Ontario doodle-art contest, for example, was going national. And now that Toronto’s Italian newspaper Corriere Canadese had re-

produced the poster with its logo Semaine du Canada/Week 78 translated into Italian, Mrs. Scott was happily anticipating Italo-Canadian doodle-art entries. As a parade of program development officers, regional chairpersons and folk arts council executives edged into the spotlight, deposing a reluctant Mrs. Scott, my notebook began to fill up with lists of Canada Week activities: bicycle tours winding nervously around the edges of Quebec, twinning programs between such good friends as Alberta and Quebec, personality tours by well-known Canadians. The calendar of events was greeted with silence. Only the CBC’s Larry Zolf contributed a commentary on the passing scene. After yet another solemn reference to “These Provinces of Ours,” Zolf was moved to observe

“-as opposed to These Provinces of Theirs” Humor, in fact, was the one element conspicuously lacking from Canada Week. Which illustrates one of the more curious paradoxes in Canadian cultural life. We are a country of talented humorists in search of an audience. Our literature and stage have never lacked for gifted social satirists: writers Stephen Leacock,

Donald Jack, Eric Nichol, Mordecai Richler; performers Don Harron, Rosemary Radcliffe, Dave Broadfoot, Dave Thomas, Billy Van and the late Jean Templeton—among others. But Leacock is more widely read abroad than at home (how many Canadians have actually read any Leacock apart from schoolbook editions of Sunshine Sketches?) and in the last year or so, CBC radio’s Royal Canadian Air Farce, still one of the funniest shows around, has shifted from sharp topical satire to softer, more generalized material. It’s a direction, according to CBC program sources, “that doesn’t go over our audiences’ heads.” Our wealth of comedy talent seems to be naturels way of compensating for the fact that the great Canadian audience, decent, law-abiding and clean

personal habits, has in fact no sense of humor. Few other people in the world take themselves in such deadly earnest fashion—with the possible exception of the Albanians. And nothing could illustrate this earnestness-gone-rampant more than Canada Week.

ground anywhere but here are remote—not because Canadian Unity is not a highly desirable thing but because a celebration of this sort launched by management teams of unitycrats ought to tickle a nation’s funny bone more than its unity bone. But in Canada no one will laugh. We seem to seriously believe that no supporter of the Parti Québécois could resist the triple inducement of touring celebrities Bruno Gerussi, AÍ Waxman and a week full of sausage and picnics. What stony péquiste heart will not melt when confronted with unity chief G. Hamilton Southam’s slogan: Canada, it’s you and me/Le Canada, c’est toi at mop Maybe the organizers of Canada Week understand something essentially Canadian. No other country fighting for its life would dare to spend $4.5 million in a folk dance competition with René Lévesque’s $2.5-million St. Jean Baptiste Day.

what they’re doing. When Weekend magazine ran a spoof issue last April Fool’s day it included an article listing six steps to perfection. The steps included: (1) stop sleeping, (2) learn ballroom dancing, and (3) stare at a peanut for one hour a day chanting the names of favorite Indian dishes. The article concluded by suggesting Canadian readers send $54.95 to a U.S. address for more advice.

Eighteen readers actually sent off money orders—so there is hope for Canada Unity Week. All readers who care to contribute to the cause of Canadian unity and humor should please send contributions to me c/o Maclean's, 481 University Avenue, Toronto, Ontario, M5W 1A7. They will be used in an amusing way. 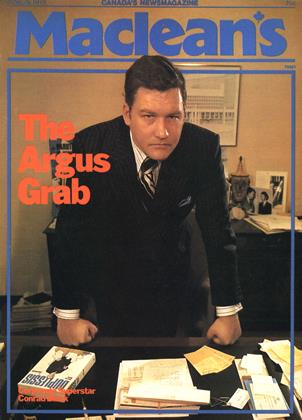