They were the first troops into the streets of Montreal during the October Crisis of 1970. They were sent to Cyprus in 1974 when the Turks invaded. They guarded Israeli athletes at the Olympic Games in 1976. Through the years the Canadian Airborne Regiment has become part of a long military tradition rooted in the exploits of the Canada-U.S. First Special Service Force during the Second World War. Those days were celebrated in the movie The Devil’s Brigade with William Holden.

Since 1976, when the paratroopers were mysteriously shifted from Edmonton to Camp Petawawa near Ottawa—the better to be poised for moving on Quebec, critics charged—the Airborne has been the fittest, meanest regiment in the latter-day

Special Service Force at the base. From the beginning the Paras stood out from the crowd with their distinctive red berets, calf-high boots and insouciant manners in nearby Pembroke beer halls.

The crusty troopers also harbored a powerful resentment about their move from Edmonton. The Hercules planes used in their drops were two or three hours away by bus in Ottawa and Trenton. Their parachutes had to be regularly sent back to Edmonton for drying and packaging. There was a widely held conviction, too, that the government planned to break up the regiment, whose only specific duties are to stand by in case of war.

When Defence Minister Barney Danson chose an interview with Legion magazine this month to ruminate about the future of the Airborne, his views were attacked like hot cross buns at an Easter dinner by the Airborne’s commander. Col. Jacques Painchaud. Painchaud, one of those classic man’s-man leaders who jumps with his troops, didn’t like Danson’s suspicions about “elite units” and the minister’s assertion that Canada “can’t afford the luxury of an unassigned unit to be inactive.” Painchaud termed the Danson comments “stupid” and suggested he resign.

Given the cardinal rule that the military must stay out of politics, it was Painchaud who was sent packing—to a desk at headquarters. Ironically, Painchaud’s outspokenness accomplished something that all the private grumbling had failed to do: Danson categorically stated later that he has no intention of disbanding the Airborne Regiment. ROBERT LEWIS 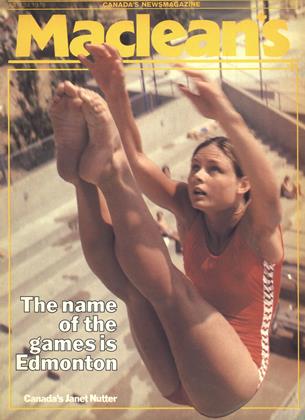