In the last dozen years of the unity crisis the debate has turned full circle. English Canada has been jilted. Now the question has neatly turned into: “What does Canada really want?”

Quebec’s goals are clearer now. That’s not to say they are compatible. There are conflicting goals within Quebec; but the society does have a sense of self that transforms the unity question to one of issues. The group grope over “who are we?” is largely passé in the province. The rest of us are still groping. Existential questions preclude the practical ones, and we nine turn in muddled circles while Quebec steams ahead to referendum and decision.

Can we have a common goal—a common sense of self?

Are we basically British?

American? Ethnic? A potpourri of all those things? Or,

God forbid, something uniquely Canadian? Our provincial leaders have charged off in 10 different directions to the battlefront (perhaps we’re surrounded).

Perhaps, though, we’re overlooking the obvious and most uniquely Canadian aspect of the whole debate. The inability to agree, in itself, may be a large part of our national identity. Our history bears it out. English and French have cohabited in this land in relative peace for centuries, not by agreeing on issues, but by avoiding them. Even our sovereignty was not won in a bloody, American-style confrontation, but by avoiding the issue. A week’s delay in declaring war, an extra seat at a conference.

Revolutions and new solutions arise from confrontation. Thesis clashes with antithesis and from the ashes a new synthesis arises. Or so goes the theory.

Canada has always done it differently. Avoid the clash. Try to accommodate both thesis and antithesis in some compromise. Even our West was won in bureaucratic order rather than in the rough and tumble grab for power and wealth that typified other frontiers.

The Canadian compromise is uniquely ours. It turns us into bureaucrats instead of revolutionaries. It lowers horizons. It leads us to Liberal governments . . . the only party without principles, but with the special Canadian touch of somehow encompassing all principles, whether they conflict or not.

Consistency is not a part of the Canadian compromise. We are inconsistent because rejection of any nonconforming part would be painful. Why make a fuss? It’s easier to accept everyone and everything and not ask if it belongs. Karl Marx could join the Liberal party. So could Adam Smith. Ideology would never come up. The upshot of all this compromising is that we’ve outgrown the need to agree.

It’s a marriage that’s matured. The bloom is off the rose and the young love

faded. We know our partner’s nasty sides as well as the romantic. And we let things go. Insults and injustices that would spark riots in more Hegelian societies are quietly forgotten in ours. Why rock the boat? A royal commission now and then is as close to conflict as we like to come. Dull? Of course—but it works. We’ve grown middle-aged in remarkable peace. Two languages, many cultures, a Medusa of governments . . . the ingredients for collapse have always been with us. We’ve survived. Issues that would destroy stronger systems wither in a weaker system precisely because we don’t try to solve them. We discuss problems, assign bureaucrats to them, have conferences, and generally bore issues to death. When all the heat is out of a problem, we accept both sides, give each a part of what they wanted, and forget the whole thing until it heats up again. That’s the Canadian way. It wouldn’t work anywhere else. We're unique.

William Lyon Mackenzie rebelled, but his grandson became the epitome of enduring public stability . . . more firmly entrenched than the Family Compact. Riel found himself confronted, but has by now

been fully co-opted into mainstream culture and minor hero worship. Our revolutions are no less serious than others, we just don’t take them seriously. We adopt them and consume them until they’re part of the whole again.

We’re certainly not like the Americans. When they wanted to claim the whole Pacific Northwest (including the juiciest part of British Columbia), their rallying cry was “54° 40' or fight.” We settled for 49° and then fumed quietly for a few years.

The Americans seem to have an innate need to know, to clarify and to explain. They are r experts at eliminating all the extraneous frills. They simplify and standardize. Quality aside, the quantity of American life is there for all to see. But, from the Model T to the 11 different herbs and spices, the quantity of American life is based on standardization. The Papa burger tastes the same no matter where or by whom it is cooked. They are experts at reducing everything to a system.

We, on the other hand, are not all that good at standardization. We can’t even agree on a standard language. My children end the alphabet with “zed and zee,” or “zee and zed,” alternately. Like typical Canadians, we find it easier to accept a 27-letter alphabet than to reject one of them. Who cares?

Perhaps the greatest difference between us and the Americans is' the attitude to right and wrong. The secret of their success is rationally choosing The One Right Way, then standardizing and systematizing it for mass propagation. The secret of our success is avoiding the choice between right and wrong, and letting all possible solutions coexist. The One Right Way spawns missionaries and empires. The Canadian way(s)is more colonialist: “Whatever you say, massa . . . [sotto voce] until the next massa comes along.”

We are to other nations what the Liberals are to politics, Unitarians are to religion, and the platypus is to fauna: an outlandish hybrid, a little bit of everybody. In this respect it’s a little ridiculous to even talk about Canadian unity. It’s a contradiction in terms. But survival? Perhaps, like the Liberals, it’s complacent diversity, not bloody unity that will help us survive. 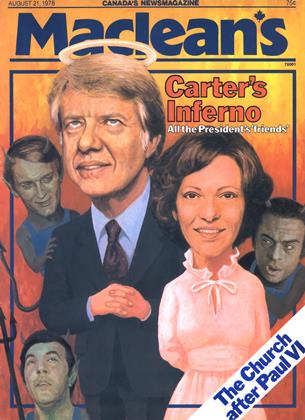