Do not ask, Westmount, for whom the bell tolls; it tolls for thee John D. Harbron August 7 1978

The Parti Québécois victory of November 15, 1976, was the revenge of history, not of the cradle.

The cradle had done its work, with the unique population explosion of an isolated, frightened and conquered 70,000 habitants in 1760 to four million Québécois in 1960 on the verge of the Quiet Revolution. Bill 101, the Charter of the French Language aimed at making Quebec unilingual, is the new weapon in place of the cradle.

It is the revenge of history on other Quebeckers who would neither read the message from the past written in French demanding cultural identity, nor learn the language of the majority. Bill 101 is not only a blunt instrument to bring about such recognition, but the only major bill passed since the election of a majority separatist government committed to move Quebec into a new era of economic as well as cultural separation.

This has meant the PQ in power, with its deep socialist commitment to remake the Quebec economy through the nationalistic Economic Manifesto (remember it?) and the take-over of the hated asbestos industry, has chosen to move only on the cultural front. At the same time, Bill 101 does not stand as distinctive legislation, but as part of a continuum of policy manifested in recent Quebec history by earlier language bills, all of them resisted bitterly by Quebec’s Englishlanguage speakers.

The Charter of the French Language was inevitable, a price to be paid by the anglophone business and professional communities for two centuries of dumb anger about the French fact all around them and resistance to the dominant culture in their province.

In 1966, during an angry address to English-speaking students at McGill University in Montreal, René Lévesque, identified Westmount as having a “Rhodesianlike frame of mind.” Lévesque was being unkind if that’s the word, to both the Rhodesians and to other strong Englishspeaking minorities of the Westmount strain who have not remained as resistant to cultural change as the Montreal English. At least most Rhodesian planters and farmers speak Kaffir or the local native

dialects to communicate with their black workers and servants.

Tragically for Canada, Bill 101 is making rednecks of the many Canadians who followed Pierre Trudeau, the pied piper of national unity, when he preached salvation through official bilingualism in the euphoric years of the late 1960s. Pierre Berton would picket the English-language bookstores that now require French signs under the bill and run the risk of a stiff fine in doing so—but in the context of that bill,

Berton is revealed, after all, as the quintessential spokesman for WASP heroes and heroines in a largely WASP-oriented view of Canadian history.

Days before Bill 101 went into force, during the 370th anniversary celebrations of the founding of Quebec City in 1608, René Lévesque gave us a belt of Canadian colonial history à la française. He reminded English (and French) Canadians how close the Québécois have remained to their dynamic past and to their distinct tradition of empire building. Before Napoleon I sold Louisiana (named for Louis XIV) to American President Thomas Jefferson in 1803, French America had in-

cluded not only the seminal colony of New France but the vast Mississippi Valley, bound in allegiance to French kings by a chain of tiny forts and fur trading posts. Add to these important and rich accumulations of cod, rum and sugar-producing islands stretching from St. Pierre and Miquelon to Haiti, and French trading posts in India and Oceania, and we have yet another European colonial empire on which the sun never set.

For those who have resisted Frenchlanguage identification in Quebec, Bill 101 is now having a steamroller effect. Some modifications are likely, but strong appeals against it are bound to be futile. The same anglophones who have opposed earlier language bills and who even voted for the PQ in November, 1976, in protest over former Premier Bourassa’s Bill 22, have now found a new hero in the francophone Liberal leader Claude Ryan.

But they must beware. This man, who has already made very tough proposals for radical changes in the British North America Act as a federalist, is also a Catholic moralist, the kind that has both baffled and angered anglophone politicians and academics throughout our national history.

And while Ryan is committed to altering some of the more punitive clauses in the language charter, he certainly will not permit la langue française to lose its present power.

Instead we might soon face the fact that not only the separatists and the restless Québécois youth (whose true dimensions we cannot surmise) but also those Québécois we have arrogantly identified by “some of my best friends are French,” have privately accepted the Charter of the French Language as a permanent fact.

The revenge of history will therefore have its positive effects on René Lévesque’s referendum in 1979.

Don’t take seriously the many pollsters and pundits who continue to predict otherwise. It is mainly an anglophone crowd, in any case, who like the Westmount English have yet to read our history in French.

John D. Harbron, columnist for the Thomson Newspapers, is author of Canada Without Quebec 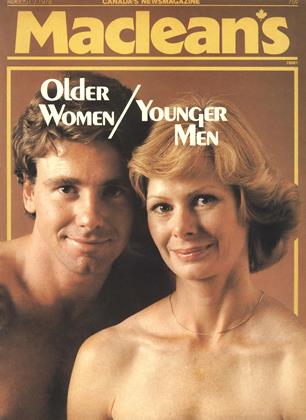