While Pierre Trudeau resumed his prime ministerial duties in Ottawa last week and Joe Clark was trying to look prime ministerial in the midEast (see page 19), NDP leader Ed Broadbent kicked off the as-yet uncalled election campaign with a dressrehearsal swing through Saskatchewan and British Columbia. There, Broadbent pursued the paradoxical aim of trying to knock Trudeau out of power without putting Clark in. Thus, he attacked Trudeau for failing to develop an industrial strategy, but added that Clark “can’t be taken seriously” on economic issues. On the national unity question, he accused Trudeau of viewing constitutional reform as a “cure-all,” but used Trudeau-like hyperbole to criticize Clark for equivocating on the question of post-referendum negotiations with Quebec.

The reason for Broadbent’s evenhanded treatment of his two opponents can be found in the latest Gallup poll, which showed the Liberals and Conservatives in a near dead heat. It is a situation tailor-made for the New Democrats, for without improving their own popular vote (they remain unattractive to 80 per cent of committed voters) they can add substantially to their present total of 17 seats in the House of Commons if the other two parties are deadlocked. That is what happened in 1972 when the NDP increased its standing to 31 seats (from 22 in 1968) although its popular vote went up less than one percentage point. Then in 1974 the NDP saw most of its gains wiped out, partly because leader David Lewis concentrated too much on the Conservatives in his campaign and helped drive voters to the Liberals. It is a mistake Broadbent does not intend to make.

If Broadbent succeeds, the prize will be the balance of power in a minority government. Some New Democrats, looking back on the 1972-74 minority period, now view the balance of power as a booby prize, for it means the sacrificing of principles. They would opt instead for another election soon after the minority result, in the hopes of destroying one of the other two parties, namely the Liberals. But Broadbent says the times are too troubled for such partisan considerations and that he would try to make minority government work, as did Lewis. “We have to have some stability once the election is over, both on the economic front and for the referendum in Quebec,” Broadbent told Maclean’s. But he would approach the minority situation differently than did Lewis. “The day-to-day, life-or-death

method of running the last minority government requires alteration,” said Broadbent, who is reluctant to elaborate beyond ruling out NDP participation in the cabinet. But it is apparent he is considering an open agreement with either the Liberals or the Conservatives, with the NDP exchanging its support for a set period in return for the government’s pledge to implement parts of the party program.

Which major party would the NDP support in a minority situation? Broadbent does not rule out either, and says he would have to consider a “mélange” of factors, including the number of seats held by each, their share of the popular vote, and their willingness to adopt NDP policies. Says Broadbent: “We’re giving the situation a lot of thought.”

But first the NDP must win the balance of power in an election campaign. And last week’s dress rehearsal showed Broadbent still has some work to do. He has consciously toned down the party’s socialist image to fit the conservative times but, in so doing, may have lost the flair of such past NDP campaigns as the

one in 1972 against the so-called “corporate welfare bums.” In Saskatchewan last week, Broadbent also displayed a distressing lack of familiarity with local issues, openly admitting he knows little or nothing about grain, freight rates and cattle. Whether this was a result of poor staff work in advance of the trip, laziness on Broadbent’s part or just a streak of honesty, it was not good politics. But Broadbent helped offset his poor grounding in the issues with his easygoing manner, which contrasts neatly with Trudeau’s aloofness and Clark’s stiffness. During the campaign proper, he will also be assisted by the use of a chartered jet and a heavy television advertising campaign, both available to the NDP for the first time as a result of the new election financing legislation. Promises Broadbent: “We’re going to fight the strongest campaign ever in our history.” 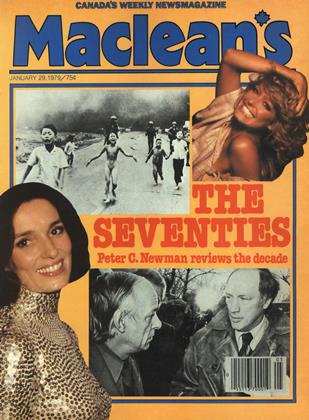