This season, the serpent of commercialism has definitely come into its own in the garden of CanLit. With one beady eye fixed on paperback sales, the other on potential film rights, it slithers along, offering big bucks to Canadian innocents. This year’s bumper crop of thrillers proves that publishers and writers are yielding to temptation—and producing some first-rate books in the process.

While the desired end result of commercial fiction is money, greasing the process is advertising. The award for biggest hype has to go to Needles, winner of this year’s Seal First Novel Award (McClelland and Stewart, $12.95). William Deverell, a Vancouver lawyer, has written a fast-paced novel starring a junkie lawyer and a crazed acupuncturist. Foster Cobb, the lawyer, is pathetic enough to be cared for and sufficiently cynical to be believable: “Fossil” he calls himself while a sweet young thing attempts to seduce him.

The villainous Dr. Au is splendid, with more than enough kinks to knot the plot in interesting ways. The good doctor’s specialties include murder, castration and torture: “In recital, Dr. Au was an artist, a master. He tinkled the piano of the fat man’s torso with a clean and delicate touch, and composed toccatas of pain. Improvising, he discovered chords of anguish that caused his trussed patient to render dissonant songs of confession and repentance.” While no writer has done for a Canadian city what Raymond Chandler did for Los Angeles, Deverell gives it the best try yet, with a vivid and detailed description of Vancouver. The action of Needles centres on Skid Road, the dreary place that gave its name to every other haunt of the down-and-out in North America, but there are side trips to the monied ski culture of Whistler and the sensual peace of Vancouver Island. There are also tongs, heroin traders, Hong Kong godfathers, and many other secret tucks in the rainy side streets of lotus land. This book is a natural for the movies, shot in the shadowy sepia of film noir.

While sepia tone suits Needles, only CinemaScope and Dolby sound could do justice to The Wave, an epic of eco-disaster by another new novelist, Christopher Hyde (McClelland and Stewart, $12.95). Picture a gigantic dam, largest in the world, at the headwater of the Columbia River. Tiny cracks in the surrounding mountain forecast an im-

mense earth slide . . . and it’s raining. Far downstream, on the American side, sits a huge nuclear dumping ground, directly in the path of the rush if not one but all of the dams on the Columbia collapse. And it continues to rain. Hyde tosses in a conspiracy and a terrorist or

two, but they’re unnecessary. Once the dam cracks and the immense wave moves south, it becomes the central character, sweeping all others before it.

Hyde researched this book for three years while working for the CBC in Vancouver and bills it “a warning.” His attention to details of engineering and water dynamics make the disaster believable and, as the wave smashes toward Grand Coulee, last dam before the nuclear station, the pages can’t turn fast enough.

More traditional in setting (Greece), and action (undercover resistance), Dolphin's Wake by Peter Such (Macmillan, $12.95) is mass with class. It concerns the rescue of a Greek resistance leader and his return to the mountains to build an army to overthrow the colonels’ junta. The twist is that the three protagonists, rather than the usual foxy ladies and red-blooded stalwarts, are middleaged and weary. Such uses the traditional action as a frame for a sensitive look at the realities of aging.

Arthur, failed archeologist and Second World War resistance fighter, coasts on his youthful memories, taking on the rescue operation as “this one last thing,” a chance to defeat impotence, arthritis and old age: “That was his own face jiggling there in the rear-view mirror. How had it grown so old so

quickly?” With his wife, Elizabeth, he sets out to rescue Nikos, the dolphin, an old comrade from the war. Elizabeth begins the adventure longing only for safety and retirement in Surrey. But it is she who really finds her youth, who rescues Nikos, who becomes a new person in her commitment to his cause. Arthur is left, “like an interesting stranger your eyes follow in the market place. Was he part of her shucked-off skin?” Such has made a thriller out of the love affairs of aging men and women—the sexual interests will surprise those who think that everything should be given up at first sag.

Believable characters and tasteful sex have not been Richard Rohmer’s long suits. But, then, he saw the possibilities of commercial fiction while his peers were still studying the tundra. Brigadier-General Rohmer has been tapping the veins of sensation ever since his first best seller, Ultimatum, was delivered into the hands of hostile critics who gave it one-line pans. This process is now so much a part of Rohmer’s mythology that his newest novel, Balls! (General Publishing, $12.95), is dedicated “to my critics.” With that defiant salute, Rohmer moves into a novel of gas shortage and freezing. His ability to focus on the nascent fears of the public should not be ignored. Read as a thriller, Rohmer’s work is wooden, styleless, etc. Read as ’50s-flavored scifi fantasy, where scenario is paramount and characters just agents of same, Balls! is not bad at all. Those who scared themselves blind in the '50s with Alas, Babylon and On the Beach will recognize their resemblance to Rohmer’s Buffalo big freeze of 1985. The purpose of this sort of fiction is not to predict

the future but to prepare us for it, and here the brigadier is on solid ground. His knowledge of the use, transport and complexities of marketing natural gas make his horrifying descriptions ominously real—his detailing of utility and governmental blundering in the 1977 New England freeze strikes an even more cogent note. Readers ill likt-1 • ignore his practical tip.-, w woollie. garbage bags and tinned foods to heal

on the Coleman. But keep an eye on the thermostat just in case. (Incidentally, the Karsh of Ottawa photo on the dust cover is not haute art, but is haute Rohmer.)

Haute tasteless best describes Eric Koch’s latest work, Good Night Little Spy. This slim novel, billed as a thriller and a satire, has the worst elements of both and the virtues of neither. The plot revolves around the exploits of a Rosedale tailor’s dummy named Monty Haynes in the mythical African country of Lalonga, recently liberated from an Amin-like dictator. Our hero, one of the stupidest yet invented, seeks fame and fortune as a PR man for the new regime.

Koch has a talent for dialogue that lends the illusion of humor to tired ideas. But references to the “rational white mind,” “négritude” boutiques and consul’s VD warnings are just not funny. There’s also a standing joke about African tribal magic and medicine that runs on and on until, like a sitcom made into a movie, it wears thin and the bones show through. The book jacket asks what can you do “when you don’t have someone like Idi Amin to kick around anymore”? Obviously, you write a book like Koch’s.

While commercialism can breed page-turners such as Good Night Little Spy, it can also provide incentive for quality. So we have Victoria housebuilder David Gurr, ex-RCN, ex-electronics executive, now turned novelist, and his spectacular first effort, Troika. Lushly written, the book explores friendship, exile, romance, patriotism and the endless waiting warfare of the spy. The tight dialogue is as good as John LeCarré’s—one revels in it as the Oxbridge dons of Ml sniff for power at the leg of the senior service. Troika is not so much paced as choreographed. The deadly minuet weaves for 20 years against a score of Cold War, thaw, détente—following the fortunes of Dravin, “ex-Russian, RN snob,” and his Soviet counterpart, Yanov, “Khrushchev’s cousin,” as they rise, fall and finally converge.

The action shifts back and forth between the British and the Soviets, with a dollop of the antics of CIA “sugar cowboys” for flavor. Gurr’s descriptions are detailed and he knows how to strike just the right note: old Russia is evoked in the smell of tobacco on a battleship; the Soviet bureaucracy is summed up in Dravin’s arrival at a Kafkaesque customs in Moscow: “ ‘No more tea.’ In a land that floated on it. And the woman, pleased to bring equal frustration to all, not making more.” Totalitarianism is the “grey faces of officials waiting to hate us” who line the airport entry. The central characters are carefully drawn, again with attention to detail and an

elegant use of metaphor. Dravin, whose naval hero father escaped from one of Stalin’s purges, is “the Russian butterfly inside the British chrysalis.” Yanov, artist and musician, joins the navy as an act of admiration for his mother, a “Hero of the Soviet Union.”

The mood of this complex novel is grey, ambiguous and filled with shadowy alliances. It is a mood to suit the ’80s, cautiously optimistic and quietly cynical. Save this one for a night when you can sleep late the next morning. Once begun you won’t be able to stop reading. Margaret Cannon 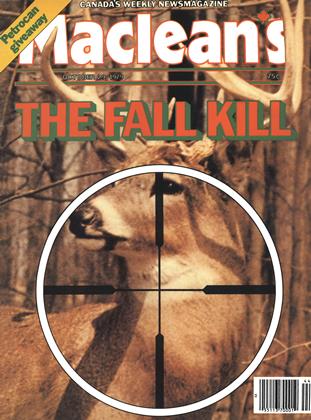