As a basic political survival strategy, most politicians have the cunning to make hay even where the sun never shines, but for the federal Tories last week’s Gallup poll (see page 19) was like a good-news, bad-news joke—without the good news. And if publicly many Conservative MPs tried to blunt the impact of the poll—treating it as little more than a political Rorschach test—privately the grumbling had begun. Nowhere were voices being lowered in dissent more scrupulously than in the right wing of the party—the faction that last week took steps to see the 1969 abortion laws tightened up and introduced a motion for the reinstatement of capital punishment.

There is some good reason for their disenchantment.

Since Prime Minister Joe Clark formed his moderateminded inner cabinet (with the exception of Blue Tories Sinclair “Slash” Stevens and Senator Robert de Cotret), the oldguard hard-liners and the neoCon free enterprisers have felt neglected, but by and large remained silent. Still, for members of a party with just two months of parliamentary governing under its belt, a bear of a budget in its back pocket and a precarious grip on power, the Gallup results could only confirm their belief that the party was on the wrong ideological track. In the words of MP Pat Nowlan (Annapolis ValleyHants), “The cabinet is not representative of the party.”

As for the possible implications, one Tory aide admitted:^

“We’ve tried to keep the lid on^ the caucus for some time, but« the Gallups may just blow it S off.”

In time, of course, this could prove troublesome for Clark, the man who in 1976 took over as party leader and introduced himself to a divided caucus with the words: “I don’t think I have many friends in this room.” He was right. Since then, however, one of his major successes has been to keep tight party discipline. And apart from a couple of October outbreaks—when former Diefenbaker cabinet minister Alvin Hamilton objected to the government’s high interest rate policy and when MP-since-1957 Bob Coates condemned the Petrocan policy—the party has not publicly broken rank. As some MPs are aware, however, the November Gallup poll just might be the beginning of the bad news. “Wait until the budget and the energy pric-

ing agreement hit the consumer. There’ll be hell to pay then.”

Should the minor grumblings turn into major ones, Clark is likely to get trouble from all sides—particularly those that depend on the party for re-election—but the right wingers to watch are MPs such as John Gamble (York North), Dr. Paul Yewchuck (Athabasca) and Don Blenkarn (Mississauga South). Gamble, for example, recently distinguished himself during question period with a McCarthyite

inquisition of Secretary of State and Red Tory David MacDonald. Gamble wanted to know why a former card-carrying member of the Communist party was working in the CRTC. “Eighty per cent of my constituents want capital punishment and 88 per cent want to see legislation preventing strikes in essential services of the public service,” he told Maclean's. “The Gallups weren’t surprising. I think it would be meritorious to have some of my views represented in cabinet.”

Yewchuck, who earlier in the session tacitly thumbed his nose at the government when he failed to show for two nonconfidence votes, could prove to be another thorn in the side of Clark’s collegial caucus calm. Intent on getting more caucus input into cabinet decision-making, Yewchuck has proposed, for the Tories’ reform-of-Parliament package, the concept of a free vote on all bills. “As it stands now, the caucus gets proposals laid down in front of them and we’re supposed to act like trained seals. A free vote would not only make for a better democratic system, it would also make the government listen more carefully to the caucus instead of their ministers.”

Blenkarn, who raised Clark’s ire by dumping on his Jerusalem embassy move policy before it was fashionable and by stirring up trouble in Indian Affairs when he told Indians “to get off their ass,” does not mince words about the vicissitudes of the administration. He blames the Tories’ trouble on ministerial inexperience in running departments, bad salesmanship of government policy and “moles” who are leaking information on decision-making. Of course, the bottom line for Blenkarn, as for many of the other worried Tories, is forthrightness in the face of elimination. “I had a pretty good majority last time,” he says. “But it can evaporate pretty quick.” 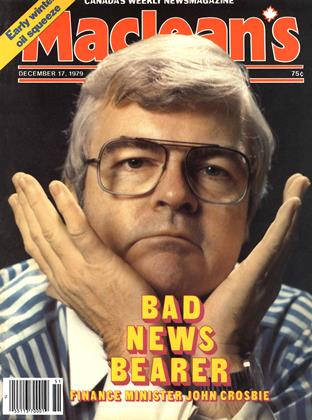