A turning point in the Sahara David Baird February 12 1979

Wictory Villa differs little from its neighbors on the palm-shaded hillside rising above the Mediterranean port of Algiers. Yet behind the peeling whitewash, Black Panther Eldridge Cleaver was once sheltered and LSD guru Timothy Leary once visited. The present occupants are also exiles and represent a desert people fighting for survival. Last week, on the surface, they were in a jubilant mood. Their Polisario Front, battling for Saharan independence against Morocco, claimed to have destroyed important enemy military installations.

But beneath the exhilaration there lurked a certain anxiety, because another event was taking place in the Algerian capital which could directly affect the often-forgotten war: 3,200 delegates of the Front de la Libération Nationale (FLN)—Algeria’s only authorized party—were naming the country’s next president. The previous leader, Houari Boumédienne, who died last December, staunchly backed the Polisario with arms and sanctuary. But his successor, Colonel Benjedid Chadly, may be less enthusiastic.

Western observers, too, were weighing Chadly’s selection, partly because Algeria, probably more than the maverick Colonel Khadafy’s Libya, dictates the mood of North Africa and partly because the moderate Chadly was preferred over Mohammed Salah Yahiaoui, a hard-liner who was widely tipped for the top job. Dignified, silverhaired, the 50-year-old Chadly is an unknown political quantity, the army’s choice to replace the prickly Boumédienne who carved out an international role as a champion of the Third World

while pursuing an austere drive toward socialism at home. But Yahiaoui— fiercely pro-Algerian rather than proMoscow as some claim—will have a key role as a member of the FLN politburo. So there is already some speculation that it will be Yahiaoui who, in practice, will wield the power.

Whoever does so, however, will probably have to spend time defusing domestic unrest rather than fomenting trouble in North Africa. The population of Algeria has nearly doubled (to 18 million) since 1960 and continues to increase at more than 3.3 per cent a year, compared with Canada’s average of 1.6 per cent. More than half of the Algerians are under 20 and there is a serious housing shortage in the choked cities.

In addition, consumer interests have been practically ignored and necessities are often in short supply. As a foreign diplomat put it: “Algeria has a Frenchstyle bureaucracy, a socialist government and entrenched Arab ways. Add all those together and it’s difficult to get results.” You can also add a penchant for secrecy that reaches amazing proportions. Even a simple inquiry to a government department about the name of the president’s wife can meet with a tight-lipped “No comment.” And last week’s party congress was held behind closed doors.

Such tactics, however, owe a good deal to the FLN’s beginnings as a clandestine opposition to the French. When the 1.5 million settlers—the pieds noirs—abruptly quit in 1962, after a long and bitter war of independence, Algeria was left poverty-stricken and

without skilled overseers. Seizing power in 1965, Boumédienne dedicated himself to propelling his country into the industrial age on the principle that there is no political independence without economic self-sufficiency. Resources were nationalized and, using the wealth from Saharan oil, he developed industry at the expense of consumer interests and agriculture. Nearly 3.2 million acres of the French settlers’ land have been redistributed to peasants, but production levels are poor and two-thirds of cereal supplies must be imported—about $70 million worth a year from Canada.

Though petroleum—the U.S. is the biggest customer—will run out in about 15 years, Algeria is now tapping vast natural gas deposits. And while it maintains friendly relations with Moscow.it makes abundant use of Western expertise. Across the vast lobby of the luxury El Aurassi hotel in Algiers—$80 a night, bring your own toilet seat—Japanese, American, European and Canadian businessmen (Canada plans to supply $2 billion in goods and services in the next three years) arrive and depart in droves.

For a country that started from nothing, progress has been remarkable: three million children get schooling and Algeria now builds its own tractors and television sets. But reality is still somewhat short of the dream. It is said that only 20 of 300 imported locomotives are still functioning, that a cement factory designed to produce exports is working at only 18 per cent of capacity and that only 200 out of the 1,000 model socialist villages planned have actually been built.

There are tales, too, of interminable red tape and corruption. Much land is still privately owned, while a rich elite—protected by government influence-lives discreetly, but well. In Algiers, landlords rent villas for up to $15,000 a month, demanding payment in Swiss francs.

The city’s teen-agers sway through the streets in tight jeans, but older women still wear the veil. Moslem feeling is still strong, as the case of Dalila Maschino illustrated. Living in Montreal, she was allegedly drugged by her family and forced to return to Algeria last year because she dared marry a Christian.

Canadian officials say the case is still open, but a change of government is unlikely to alter traditional feelings. In any case, President Chadly has other things on his mind. It would be rare for any nation to produce another man of Boumédienne’s stature within a generation. Yet without such a leader, the opportunities he created could sink into the same Saharan sand from which the country’s wealth sprang in the first place. David Baird 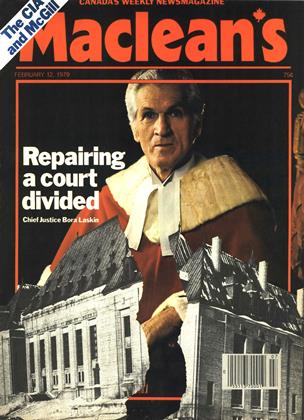