The Neanderthal axiom, “If you can't beat ’em in the alley, you can’t beat em on the ice,” has pervaded hockey like the “take no prisoners” line in B movies. The Canadian consciousness has long associated the sport with missing teeth and an antiquated brute machismo. A Washington Star columnist recently wrote, “Generally, people who go to hockey games seem to be the ones who would like to go to hangings,” and stand-up comics are getting good mileage out of, “I went to the fights last night and a hockey game broke out.”

Tottering on a tightrope between greed and quality of product, the professional leagues in North America have diluted the game like a good scotch with too much water. Three years ago, one of the most skilled ever to play the game, Bobby Hull, sat out to protest. "The present violence makes me sick,” he said, “and the blame is on idiotic owners, incompetent coaches and inept players who are pulling the sport

into the mud with this senseless violence. All these incompetents should be put together in the same circuit so that they may get slaughtered amongst themselves.” Following Rick Jodzio’s assault on Marc Tardif that almost ended Tardifs career, the eye injury to Henry Boucha during a stick duel with Dave Forbes and Dave Maloney’s repeated smashing of Brian Glennie's head to the ice, all of which resulted in criminal charges, the NHL moved to police itself. Attacking the symptoms—on the heels of attorneys-general in Ontario, Manitoba, Alberta and Quebec—the NHL increased fines, penalty minutes and suspensions for collective and individual mayhem. The moves came after New York Rangers' Fred Shero voiced coaches' confusion: “One doesn’t know whether one gets away with a two-minute penalty or with three years of hard labor.”

Canadian sociologist M.D. Smith says, “Athletes, like the military, express aggressivity, which is expected of them.” Nowhere is it more expected or expressed than at the minor and junior levels in Canada. Quebec City barred parents and other fans from Midget B games (players aged 16 to 17) this season in an attempt to cut

down on violence, after five of the first six games had to be halted because of fights on the ice. In Ottawa this season, atom leagues (players aged 9 to 10) tried to institute handshaking between opposing teams at the end of games, a tradition in international matches. The idea had to be abandoned after fights broke out during the salutations.

While the NHL’S Vancouver Canucks

were paying off a $100,000 bill from a color psychologist for their new red, yellow and black uniforms that would make them at least appear more aggressive and intimidating, Toronto Marlboro minor bantam (players aged 12 to 13) coach Pat Flannery was suspended for two years for his role in a brawl and the Major Junior A Marlboros (players aged 16 to 20) were celebrating their latest battle. Marlie Pat Graham, who was already in the penalty box when the fight broke out, was suspended by the league for two games for joining the fight.

“Whitey [coach Bill White] would have suspended me for three games if I hadn’t left the box,’’ confessed Graham. “This way I only got two.”

While former NHL president Clarence Campbell can say that concern over violence in hockey "... is the consequence of the too fertile imagination of a great number of bleeding hearts who have no idea what it’s all about,” Serge Savard, all-star defenceman of the Montreal Canadiens, says: “If they suspended the coach of a team which provokes a general brawl, just like a player, there would be no more fights on the rinks. It would be all over. If they do not do it, it is because they want it to continue.”

A three-year study on violence in hockey commissioned by the Quebec government found that less than one per cent of rule infractions are accidental; more than 15 per cent of all injuries are the result of fouls; slashing is the main cause of injuries; most eye injuries occur among players age 11 to 15; and 15 per cent of those eye injuries result in legal blindness. An American study in 1976 of 300,000 amateur hockey players found that they suffered 25,000 facial injuries over the season. Among NHL

players, 67.2 per cent have lost one or more teeth due to hockey.

The intentional and accidental violence in hockey is driving away young players even as it attracts unsophisticated bloodsport fans. Toronto's city of North York reports 1,089 fewer boys playing orga| nized hockey this year over last, 13 teams have withdrawn from the Metro Toronto league this year because of lack of players and the Catholic Youth Organization Hockey League in Toronto has eliminated its three youngest team divisions because not enough under-12-year-olds were interested.

North American hockey has divorced itself from its original raison d'être, a stage for artistic skating and puck-handling skill at astonishing speed. The impetus now is to further arm the combatants with head and face protectors, which NHL Referee-inChief Scotty Morrison admits only encourage greater use of the stick as a weapon. Sport is an outgrowth and reflection of society and as Dr. Pierre-Yves Lamarche commented in the Quebec report, ■ “Sport stops where violence begins. A sport producing an excessive rate of accidents should be modified or abolished.” ) 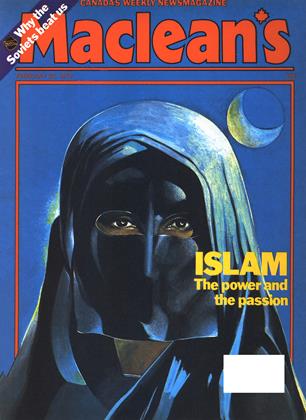