"The revolution hasn’t died, it has simply ceased to be frantic,” says the literature of the Humanity Foundation, whose eight-day symposium next week promises to be a peaceful bellwether of consciousness in the ’80s. Combining high-tech with the humanities, the symposium will take place simultaneously in Toronto, London and Los Angeles, using advanced

computer technology to spread the message of the holistic “New Age” to a potential audience of 10 million.

The roster is impressive. Buckminster Fuller, Marcel Marceau, Ralph Nader, Allen Ginsberg, R.D. Laing, Ruth Carter Stapleton, Swami Satchidananda, Dick Gregory, Marshall McLuhan and Country Joe and the Fish will be on stage along with over 100 internationally known speakers who will “interface” via video satellite twice daily in an intercontinental coffee klatch.

“The symposium will examine the future in a humanistic manner,” says Laura Huxley, widow of the futurist novelist Aldous Huxley (Brave New World), who along with some of the other speakers has been involved in many such gatherings in the last decade, trumpeting a sort of consciousness link somewhere between the idealism of the ’60s and Star Wars.

In what Guru Raj Singh, the 27-yearold Sikh minister from Burlington, Ontario, who is directing the activities from the Vancouver-based offices of the Humanity Foundation describes as “a vision born in a meditation on technology,” the symposium will deal with large-screen video satellite programming that will see t’ai chi master AÍ Huang dancing in London to live music from the flute of Paul Horn in Los Angeles. Further extending the realm of possibilities is the participation of about two dozen cable TV stations, including stations in Toronto, Vancouver, Calgary and Edmonton. Two hours of video interact are scheduled each day, with the remaining 14 hours taken up with workshops covering everything from New Age sexuality to corporate responsibility. “Nothing of this magnitude has ever been attempted by a grassroots group before,” says Jim Milord, 26, the co-ordinator in Toronto.

“Tradition” is one of the few words that does not easily mesh with the jargon of the New Age networkers and synergists, and even the financing of the symposium has required counterculture cunning. With a budget estimated at a cool $800,000, “financing will be tight,” admits Datar Singh, 23,

assistant executive director of the foundation, “but there’s an energy behind us that’s bigger than any financial institution,” referring to a pervasive “force” that’s a lot like Star Wars.

Chances are the symposium will lose money initially. Satellite time alone is estimated at $106,000, hall rental at over $100,000 and while many of the speakers are deferring their fees until after the event, others, like Ralph Nader, are not. Still, organizers see their deficit being recouped primarily through sales of a book and film, video and audio programs which will be marketed after the event.

“All the loose ends are synthesizing,” says Jim Milord. However, gremlins can disrupt even the most holistically failsafe mechanisms, as Maclean's discovered recently when talking with poet Allen Ginsberg, a keynote speaker at the Toronto venue. “I think I’ll be there, but I haven’t had any confirmation as far as airline tickets or expenses are concerned,” he said.

“Really? That was supposed to have been taken care of a while ago,” came the response from Toronto headquarters.“ Hey, thanks for plugging a hole in the network dyke.”

The countdown for the Woodstock of the ’80s marches on. 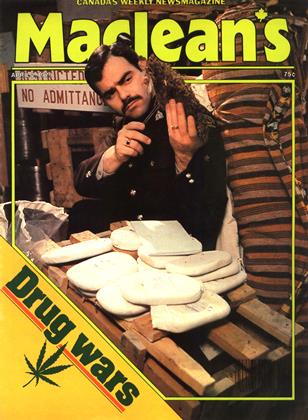