Spread on the hotel bed behind Michael Yarosky as he gazes 20 storeys down into the chiseled stone core of Quebec City are fresh editions of the provincial capital’s Le Soleil, Montreal’s La Presse and a wilting copy of The Jerusalem Post. The mélange is appropriate: Yarosky is a militant Zionist, an erudite offspring of Russian immigrants to Quebec and the political listening post of Montreal’s skittish Jewish elite. He cringes at being called a lobbyist. Yet, in his own words, always cautiously candled like eggs against a vigilant inner light, Yarosky says: “I spend half my time in Quebec City developing relationships with key political personalities and key opinion-makers.” So, in the vulgar parlance of politics, Yarosky is a lobbyist.

His business card reads: Director General, Jewish Community Research Institute. Behind that bland calling card is the consolidated worry of Quebec Jews. Funded by the Canadian Jewish Congress and Allied Jewish Community Services, the research institute was created in September, 1977, because, says Yarosky, “The Jewish community did not have links with the Parti Québécois.” Now there is one: Yarosky.

The early-greying, 35-year-old spends the other half of his time in Montreal where he reports back in to a 15-member board of directors chaired by foodchain executive Arnold Steinberg and including the Jewish community’s most visible worrywart, Seagram’s president Charles Bronfman. It was Bronfman who offended many Quebeckers on the eve of their 1976 provincial election by saying that a victory for René Lévesque would mean “the destruction of the Jewish community.”

There was never evidence to support such fears but Bronfman’s headlined anxiety set off a hysterical series of stories of Quebec anti-Semitism in North America’s English-language press. The worst was in the February, 1978, issue of the U.S. National Jewish Monthly. A lengthy lament for Montreal Jews— written from Toronto—included volatile affirmations such as this: “Montreal’s Jews feel the dark shadow of the Holocaust hover above them and their reactions are influenced by the possibility of history repeating itself.” Jewish leaders were quick to realize that such excesses are insulting to Quebec francophones and the Canadian B’nai B’rith condemned the article as “insensitive, inaccurate and inflammatory.”

Few are better placed than Yarosky to judge the security of Jews in Quebec: he has made a career of being Jewish in Quebec, climbing his way up the jungle gym of power as a manager of Jewish community institutions. He speaks French with a patates frites-pure accent. Now, as his two-year assignment as Quebec lobbyist comes to an end, he will become executive vice-president of the Jewish National Fund of Canada and travel the country soliciting donations for projects in Israel.

Yarosky’s assessment of Jewish experience in contemporary Quebec: “I find the association of the government or the people of Quebec with anti-Semitism glib, irresponsible and hideous. When people compare this government to Nazi phenomena, I think those comparisons are obscene and totally unreal. Most importantly, they cheapen the memory of the Holocaust.”

The blame for Jewish anxiety, he says, lies with the community’s traditional “insularity and isolation.” One cause is Quebec’s religious school system which divides children by language and religion and once forced even French-speaking Jews from North Africa to send their children to English-language Protestant schools because, according to Catholic school boards, Jews are Protestants. Not, however, to the Protestants: until recently, Jews paid Protestant school taxes but were not permitted to participate in school-board elections.

That is the essential injustice of French Quebec’s reputation for antiSemitism: evidence of anti-Jewish prejudice exists, but an extensive survey of Montreal Jews by Yarosky’s research institute led to a surprising conclusion: “The clear indication is that Jews feel that anti-Semitism among French Canadians is less than among English Canadians.”

Montreal B’nai B’rith President Conrad Shatner calls Yarosky “a damned brilliant boy” but regrets that so far “what he says just hasn’t reached the members of the community.” The government, too, has welcomed Yarosky’s liaison role. “I guess it’s because I’m so comfortable with my Jewishness and because I’m also comfortable with French Canadians that I have no difficulty in bridging the gap,” concludes Yarosky. “If I felt Quebec society was such that my Jewishness had to be tamed, if I felt uncomfortable walking around with books on Jewish themes or uncomfortable being a very strong Zionist, I wouldn’t be here.” 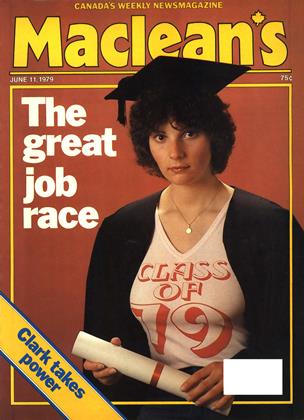