Even those antediluvian souls who equate homosexuality with a case of leprosy might find La Cage aux Folles screamingly funny. It has been cleaning up in New York like a domestic on Dexedrine, looking to become one of those cult items that people cherish and see over and over again.

La Cage aux F olles is a club on the Côte d’Azur featuring drag entertainment and owned by two middle-aged lovers, Renato (Ugo Tognazzi) and Zaza (Michel Serrault). An entertainer there himself, Zaza is a purse-lipped terror— Serrault’s gloriously giddy performance, timed to the nanosecond, is a crazed mélange of Lindsay Kemp, Divine, Quentin Crisp and Craig Russell. Every inflection is a performance. The more conservative Renato has the patience of a saint—the straight man who accomplishes with the smallest raise of an eyebrow what Zaza achieves with all his fluttering fingers. They’re a perfect, normal couple—enjoying getting on each other’s nerves.

When Renato’s son Laurent confides to his gay father that he wants to be married, La Cage—a farce with a heart—is swiftly set in motion. His fiancée’s family is the prototype stuffy middle-class family: the mother a drip and the father a high-ranking official with something called the Union for

Moral Order. Naturally, they want to meet the prospective son-in-law’s family .. . and guess what happens when guess who’s coming to dinner?

Les préparations de Renato and Zaza reach epic proportions. Their flat, resplendent in priapic detail, has to be totally refurnished—featuring a large crucifix and Spanish baroque furniture that victims of the Inquisition might have been forced to sit on. A black “maid” (Benny Luke), previously attired in scanties, is required to dress straight; one small problem is that he can’t walk in normal shoes. And in one of the funniest scenes ever recorded on film, Zaza is unsuccessfully taught by Renato to “butter his toast like a man,” during which both Zaza’s voice and the toast fly off in the most unexpected directions. But for the coup de grace there’s Zaza’s impersonation of Laurent’s mother—awful rhinestone earrings, wig askew and sensible shoes to

outdo Flora MacDonald—during a dinner party that is a minefield of mistakes in manner. The “maid” neglects to notice the disporting males on the dinner plates; shouts the bride’s father, “Greeks on my plate!” Later, he (Michel Galabru) is forced to adorn himself with the accoutrements of the fair sex to avoid detection by reporters.

Directed by Molinaro at breakneck pace, La Cage aux Folles is the funniest movie to deal with inversion since Some Like It Hot. But the inversion’s real, and touching, too: you believe the two lovers of 20 years care for each other and you can’t help but respond to their caring. The hilarious disguises attempted by all are disguises we all attempt for various reasons: reputation, style, the need to be liked, the fear of being found out for what we are. La Cage helps us hoot about them. And gay, in this case, is something few will want to take exception to. Lawrence O’Toole 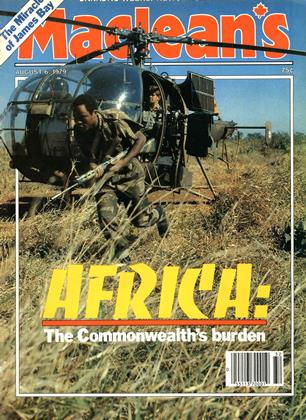