There are, if you must know, three Joe Clarks. The public has yet to discover it, but there are three thin men thrashing around inside that elongated blue suit, tripping over one another, bumping into the opposing personae, jealously fighting for a bigger piece of the action. The prime minister of Canada is a house divided unto itself, a schizophrenic mélange, an intellectual scrambled egg. Joe Clark, like Gaul, is divided into three parts.

There is, first of all, the Joe Clark called Bravado.

This is the Joe Clark who defiantly announces, at a press conference within 24 hours of taking office, that of course he will be moving the Canadian embassy in Israel to Jerusalem, and whoever thought he didn’t have the guts to do so, and he was serving notice to the civil service and diplomats that he didn’t need their advice, and so there, take that. It is the mark of a man who is tired of having sand kicked in his face. He can read. He knows that Larry

Zolf has dubbed him the

man called Insipid. He knows that the press that trailed him on his world tour (celebrated in song, skit and anecdotes which last to dawn) regarded his conduct in foreign climes as gauche, innocent and embarrassing. The Jerusalem ploy was the answer to the taunts: he would make a bold foreign initiative, a slap in the face to those who claimed he was lost in the world beyond High River.

This was the Joe Clark from Bravado. He is now paying the price, of course. Poor Robert Stanfield—Stanfield of Arabia—has become the battered bean bag of the Middle East, earnestly plodding from country to country, tugged this way by Menachem Begin, bashed the other way by the Arabs, the original toffee man offering his body and soul (and impeccable reputation) on the altar in an attempt to rescue a silly bit of bravado.

It should be remembered here, before we leave this portion of the scrambled ego, that while at university Joe Clark met regularly with a group of pals for

those usual college bantering and whither-the-world sessions. It was Joe’s point to arrive each time with a new word that none of the others had ever heard of. That is a small clue to the personality. (Tortured fans of the English language will understand, therefore, the man’s liking for such atrocities as “privatization” and “specificity.”)

The second Joe Clark, fighting the first, is the Joe Clark from Cautious: he really is a conservative. The man will make haste slowly (interrupted only by those aberrant bursts of bravado to

prove that he is not cautious). It is why we are now being task-forced to death. Of course we’re going to junk Petrocan was the campaign pledge and the postelection assertion. Now a task force, composed of raging capitalists from the private sector and including no member representing the public, will investigate the possibility and will be stuck with the responsibility for privatization, if necessary, but not necessarily privatization. Poor Stanfield is to investigate Jerusalem in hopes that it will go away. Mortgage interest deductibility? Well, we’re sticking by the pledge but we just haven’t decided all the details about a project that will help those who don’t need help and hurt those who do.

The cautious Joe Clark puts Lowell Murray into the Senate as a way of correcting a mistake made by the Joe Clark from Bravado. The appointment to the same chamber of the brash Robert de Cotret? Since it is now apparent that de Cotret is in danger of being eaten for breakfast by the long-slumbering Lib-

eral economic cadre in the upper house, the astute and calm Murray is the life preserver for the callow and impetuous de Cotret. Caution always follows bravado, an instinct that will keep Joe Clark in office a long time.

The first 100 days? Journalism reverberates with comparisons to Kennedy and Pearson, not to mention Roosevelt. The cautious Joe Clark, from a cautious small town, instead shut down the country, cooling its temperature, adjusting

it to his cautious style, refusing the entreaties to call Parliament. For the red-fanged cries of Tories across the land, for the instant bloodletting among the bloated Liberal patronage appointments, Clark hummed and waited. The head of Bryce Mackasey on a platter? That will come—in due time. The fashionable bars of the land are awash with the obscenities of young Tory lawyers awaiting their chance to dip their blue noses into the trough so long reserved for their Grit drinking companions. Caution prevails. Intruding on those two

warring elements within the same bosom is the most secret Joe Clark, the private one. He is, like Stanfield, an entirely different person when relaxed. Public appearances, rather than bringing out the shine of a Trudeau or a Kennedy, seem to mystify and perplex Clark, rendering him even more a windup stickman and eliciting the arch chuckle that echoes in the rain barrel of insincerity.

In private, he has a nice, dry wit— especially about himself. He can hold himself up against the light and discuss what he regards as his strengths and what he knows full well are his weaknesses. He can be much more cynical about personalities than the voters, who chose him, would ever expect.

We will see intermittent, jerky evidence of the first two characteristics, but little if any of the latter. He knows vaguely where he wants to go. He’s just slightly confused about how to get there. 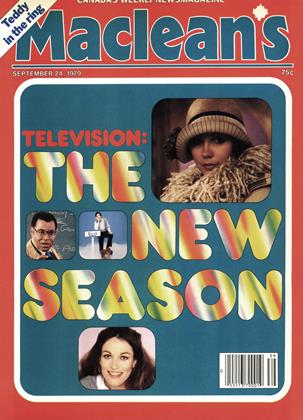