It is still a war for believers, sluggish battles fought in laboratories, clinics and boardrooms throughout North America against the disease that claims one in four lives. Only a few decades ago the arsenal was slight, the war chest a meagre $1.5 million—less than many companies spent to “sell soapsuds,” recalls one full-time U.S. fund-raiser. But this year the war on cancer being waged by establishment researchers is financed by more than $1 billion. And while victory is elusive, battles are being won on the chemical front.

The battlefield is unquestionably American in dollar terms (last year $1.04 billion was devoted to the cause by the U.S. cancer establishment, compared with $25 million in Canada), but the contribution of Canadian-based researchers has earned recognition. While research continues for a vaccine to eliminate the complex killer, surgery, chemotherapy and radiation remain the most effective treatment methods. In centres such as Toronto, Edmonton and Vancouver, which contain some of the most complete and most active radiation treatment facilities in the world, important work is under way into radiosensitizers — drugs that enhance the effectiveness of radiation therapy.

The two drugs, metronidazole and misonidazole, aid the assault on cancer by acting on oxygen-deficient cells deep in tumors, making them more susceptible to destruction by radiation. In animal tests, they have proven an effective support weapon. Now they are being administered daily to test groups of patients to determine first their safety, and then their effectiveness in treatment of human cancers. “This research is extremely exciting and Canada is making a giant contribution,” says Peter Scholefield, assistant executive director of the National Cancer Institute of Canada (NCI).

More alluring in its potential as a treatment drug is a substance known to medical science for 20 years and now seen optimistically as an ultimate drug, capable of curing everything from the common cold to cancer. Called interferon, it is part of nature’s own immunity system, a protein secreted naturally by

the body’s cells when they are threatened by invasion of disease organisms such as viruses and bacteria. In the late ’60s a scientific team in France and another at Dalhousie University in Halifax discovered that interferon also inhibits the growth of tumor cells. But what has stymied clinical researchers in their efforts to further test nature’s wonder drug is a critical shortage of supply. The protein is so costly to produce artificially that if it were possible to make a pound of it, the estimated price would be $22 billion. Under one

current production method—extracting interferon from white blood cells that have been infected with a virus—blood from 40,000 donors was required to fill a $2-million order last year from the American Cancer Society (ACS) for tests on 150 cancer patients. With total treatment costs estimated at up to $40,000 per patient, it is an unlikely treatment option of tomorrow, or next week or next month. Still, the results of the ACS tests are promising. In Houston, Dr. Jordan Gutterman reported remissions in 21 of 38 cancer patients treated with interferon at the M.D. Anderson Hospital and Tumor Institute.

At the forefront of interferon research is Calgary molecular biochemist W.H. (Chris) Tan. His lab at the University of Calgary last year was the first of three in the world to isolate pure interferon in order to study its chemical structure. Says Tan: “Interferon is the tip of the iceberg—it is the unravelling of a new era in biology.” Tan, like others around the world, isworking toward cloning interferon to speed production. Another production method, developed by Tan and three colleagues in 1975 at the University of Pittsburgh, has been patented by the U.S. government. Called superinduction, it produces interferon by exposing skin cells to viruses and other chemicals and offers perhaps the best hope that demand for the substance can be met. Tan is the only Canadian and one of the first researchers worldwide to conduct clinical safety trials of the second method of producing interferon. Of 14 cancer pa-

tients in Alberta given the substance, none suffered toxic side effects, and the Calgary molecular biochemist says he hopes to test its effectiveness in treating cancer in combination with other drugs sometime next year.

Meanwhile, the U.S. National Cancer Institute is expected to contract this year for production of 150 billion units of interferon to conduct experimental therapy on several hundred cancer patients. (The ACS’s $2-million order last year was for 50 billion units.) Not surprisingly, the funding of trials has resulted in a flurry of activity among researchers and drug companies eager to develop a quick, economical process. Dr. Alexander Yabrov, a former Soviet scientist and now a research associate at the University of Toronto, was snapped up as a production consultant by a New York-based company, National Patent Development Corp.,which plans to modify its interferon production facility at New Brunswick, New Jersey. Yabrov, a microbiologist whose book Interferon and Non-Specific Resistance will be published in the U.S. next month, says the substance has already been proven effective in treating cancer in Sweden, Finland, Yugoslavia and Japan. He predicts it will be a broadly used commercial drug within two or three years. But doctors in North America generally are more cautious.

cer, they may be useless once the disease exists, says Dr. Robert Huebner, head of the immunity unit at the U.S. NCI in Bethesda, Maryland. “Failing to find the right substance in the right amounts to imitate what the body can do naturally often would make the cancer worse than it was,” he says. “As far as I’m concerned the only route research should take is to develop preventive vaccines.” His team is doing just that and after five years’ work reports an 80-per-cent success rate injecting mice, rats and cats with inactivated tumor cells to trigger immunities production. The side effects have been astounding: immunization against cancer has also tripled the lifespan of mice, for instance, to three years. Huebner is now immunizing chimpanzees and within a year or two plans to vaccinate a test group of high-risk humans, members of so-called “cancer families.” These individuals can be identified through a skin

biopsy to determine whether they are the one out of every two offspring in a cancer family who has inherited a cancer-prone gene.

While such vaccines may be merely wishful thinking because of testing risks, recent research in three labs offers hope that a completely safe vaccine can be produced. At the Mayo Clinic and the Harvard University Medical School, scientists have simultaneously developed a “safe” vaccine against the Epstein-Barr virus which causes mononucleosis and has been associated with two forms of cancer. The teams have found a way to free viruses of DNA (deoxyribonucleic acid)—the chemical of heridity presumed to carry the genetic order that transforms a normal cell into a cancerous one. While scientists still haven’t pinned cancer down to a virus, international studies also link liver cancer with hepatitis B virus (HBV). Dr. Baruch Blumberg and Dr. Irving Millman at the Fox Chase Cancer Center in Philadelphia have developed a vaccine against HBV. It is being tested on humans now after success with lower primates.

The Canadian NCI says tests with other, less-publicly-touted drugs have been promising. In Edmonton, six of 24 patients with advanced cancers responded to monthly treatments of anti-viral drug Ara-A Phosphate, says Dr. Gerald LePage, NCI research unit director. In Toronto, 42 patients given NED-137, a cheaply produced synthetic thought to be an effective interferon-inducer, have survived in greater numbers than usual following surgery for stomach, gastrointestinal and pancreatic cancers, says Dr. Rudy Falk of Toronto General Hospital. And in Ottawa, another vaccine given to 28 Canadians following lung cancer surgery four years ago has resulted in a survival rate of 81-per-cent, compared with 49-per-cent survival with 24 patients who didn’t receive the vaccine, says Dr. Thomas Stewart of the University of Ottawa.

Without a doubt, the massive investment in cancer research is helping science increase its arsenal of weaponry. The talent and willingness exist, says major American fund-raiser Mary Lasker of New York, providing enough money is available to finance the transition from petri dish to patient. “To do a first-class, fast job we should spend $3 billion a year.” But winning won’t merely be a matter of money, cautions James Roxburgh of the Medical Research Council of Canada. “It still takes individual researchers with the ability and self-confidence to battle against conventional medical wisdom for years.” 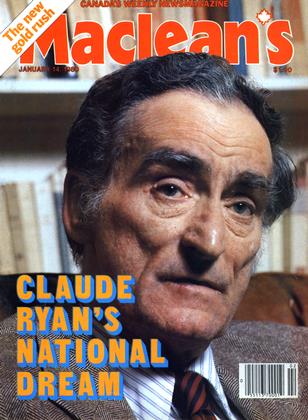