As Central Canadians slopped through sheets of freakish January rain last week, a normally balmy West Coast, in an odd reversal, was visited with the indignities of winter campaigning. Daffodils pushing through the earth in B.C.’s bellwether riding of Vancouver Centre were blanketed in several inches of unseasonal snow. The resulting low-watt citizen panic was perhaps the only thing that galvanized the L-shaped downtown seat that has been fingered as one of the West’s glamor ridings. It has been a disarmingly quiet start but one reason for the spotlight is a Perils of Pauline finish last May which saw the lead teeter back and forth until the former Vancouver mayor, Liberal Art Phillips, 49, nipped Tory economise and former journalist Pat Carney by 95 votes in a recount. Stirred into the mix was the NDP’s three-time candidate, labor researcher Ron Johnson, 28, who ran a close third.

Encompassing the park-like Kitsilano neighborhood and the apartment sentinels of the West End, Vancouver Centre is a high-turnover polyglot riding representing largely urban couples, singles, seniors and few children. Divided by the dank inlet of False Creek, it has been a virtual Liberal fief for nearly

two decades. Last election, however, it was the only Liberal seat west of Winnipeg and Phillips became a symbol—the lone Liberal gun in the hostile West. It was a burden the handsome, stork-like Phillips did not bear lightly, feeling duty-bound to engage in semi-public grumbling about Pierre Trudeau’s western disfavor and lingering too long for some over the impossible dream of a Western leadership bid during Trudeau’s short-lived resignation. The image that resulted, probably unfairly, was of a somewhat fey opportunist. Certainly, however, his offerings in the House were undistinguished, made not-

able primarily by his suggestion that Chrysler Canada be nationalized.

“A bomb,” says Johnson. “A very shallow performance,” agrees Carney. For her part Carney, 45, her oliveshaped face sporting a Maui tan, is tipped as cabinet timber. Said to be a personal protégé of Joe Clark, she has not stopped running since her near miss in May. “We acted as if we had won,” she says. In the past eight months she has kept a community office, sat in with the B.C. Tory caucus and worked with the Prime Minister’s Office to organize a conference on Pacific rim trade, all the while goosing her local recognition.

The NDP, emboldened by the stumbling of the provincial Social Credit party, have declared Vancouver Centre a priority riding, shipping in Ed Broadbent and B.C. Opposition leader Dave Barrett for Johnson’s nomination meeting last week. Stressing that it is largely an NDP riding provincially, Johnson hopes to build on the party’s strength with young people and, in the subdivided old houses of the “People’s Republic of Kitsilano,” snare some singles in the West End and collect what he thinks is a fading Tory vote.

The primary question in Vancouver Centre, as in the rest of B.C., is the extent of the Tory erosion and how the surprising national poll results translate in the quixotic world of B.C. politics. Compared with the gloom of the past eight months, however, some B.C. Liberals appear almost cocky.

Phillips claims a post-writ, 200-sample Goldfarb poll that places the Liberals ahead by 39 per cent in his riding. All sides agree that the near-poisonous anti-Trudeau feeling of the Oct. 16, 1978, byelection in B.C. has faded. “If he was a minus 10 to us in May, he’s now a zero,” says B.C. Liberal Campaign Chairman Shaun Sullivan, “and compared to what people think of Joe Clark, he’s a plus.” Tory campaign manager

Lyall Knott dismisses the Liberal poll but stresses that he will be building the Tory campaign more around the personality of Carney than in the spring campaign. A straw poll in the Tory stronghold of the West End and Kitsilano Point last week indicated no obvious Tory erosion. Last spring’s Conservative voters were not moving their votes, but throughout the riding both leadership and the budget were the most pressing issues. B.C. Conservatives console themselves that dismal poll results reflect Eastern anger at the transfer of economic power West—a movement identified with the Tories but meaningless in B.C. Voters have hardened to Clark (“the little drummer boy” snorts pensioner Bill Mosell) and softened to Trudeau (“I don’t like Trudeau, but I was glad to see him back—it was my gut reaction,” explained Alet MacLeod at the Dunsmuir Seniors’ Centre). Budget comments appeared equally divided. “I’m on my way to the bank to apply for a loan and the budget would have hurt me in every way,” says the West End’s Neil Matson. “The budget was great, the strongest we’ve had in a long time and that’s why I’m so upset it was voted out,” says Kitsilano’s Janet Kibblewhite.

The Phillips team believes that he has early momentum and that the NDP vote peaked last election. “We have the advantage,” says Phillips in the disarray of his new campaign headquarters, “that we are not the government and that this time we will have a policy.”

Carney, who has relaxed considerably on the stump, acknowledges that the public “still has not warmed to Clark” and that the race will be tough. “This is not a Tory riding,” she says with disarming frankness in the living room of her Kitsilano house. “I know that if I ran in the suburbs I’d probably win hands down.” One indication of Tory front-office interest in the riding was last week’s main-streeting by Maureen McTeer and Fitness Minister Steve Paproski. But even as snow swirled about the light raincoats and slick tires of scurrying Vancouver voters last week, another note was detectable: a peevishness. “I’m disgusted with the whole procedure,” said West Ender Julia Outit. As Grits and Tories pull out flashlights, umbrellas and snow boots to begin canvassing, they have begun to contemplate the possible spectre of empty polling stations, and the ominous clunk of NDP voters in hiking boots. Ironically, the most significant factor in this hairtrigger race, aside from the recent capricious addition of a Communist candidate with the surname Phillips, may be the injection into the voting pattern of an estimated 2,500 University of British Columbia students, all of whom were missing May 22. lt;£> 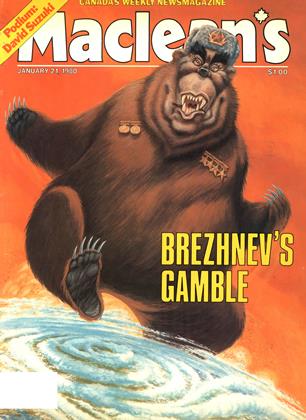