When word leaked out last June that the universe was about to shrink for the Toronto-based accounting firm of Winspear Higgins Stevenson & Co., it didn’t take executive partner Ray Harris long to spring into action. The task facing this affable 50-year-old Edmonton native and his 124 partners was to find another large accounting firm with international connections to which the Winspear firm could ally itself in order to broaden its own small-business base. Its former international associate, Hurdman & Cranstoun of New York, had jeopardized the long-standing connection by merging in June with another U.S. firm already linked with a large Canadian practice, and even though Winspear could have stayed on, it would have meant going to bed with the competition.

The problem for Harris was to find the firm with the right “fit.” Growing up as a Canadian partnership with its greatest strength in the West, Winspear was the smallest Canadian “independent” to number among the country’s “Big 10” accounting firms. The other two Canadian firms within this powerful group—Thorne Riddell and Clarkson Gordon—are, respectively, the two largest firms in the country; the remaining seven firms are international, or U.S.-associated, partnerships.

During the weeks following the loss of Winspear’s international associate, Harris had at least “chats” with most of

the other firms. Several even looked interesting. But in August, Harris found the lunch and dinner partner he had been looking for—and another westerner into the bargain: Eddie Wilburn, 60, senior partner of Deloitte Haskins & Sells, seventh down the list of Canada’s Big 10 and part of Deloitte’s U.S./U.K. accounting group with offices all over the world. “We found our two firms fit very well together in terms of personality and business philosophy,” explains Harris. It took weeks of midnight oil culminating early last month in a mammoth meeting of all the partners of both firms—249—at Toronto’s Constellation Hotel until the deal was finally struck.

Next week it happens. Deloitte Haskins & Sells almost doubles in size, overnight becoming the third-largest accounting firm in Canada. And Winspear Higgins Stevenson & Co. disappears off the face of the earth. “Of course it’s a highly emotional thing to lose your name and merge into a larger firm,” admits Harris, “and it’s something we thought about a great deal before making the final move. But as a cold rational business decision, it was a step we believe is best for our professionals and our clients.” In the increasingly competitive world of accounting— which takes in auditing, financial consulting, management consulting and a host of related services—the merger will give Winspear the international scope it needed and Deloitte the broad cross-Canada depth it previously lacked. It’s also probably the last big merger in Canadian accounting. Among the other Big 10—now the Big Nine— the power bases are so well entrenched that no one is expecting another merger of this size for a long time. 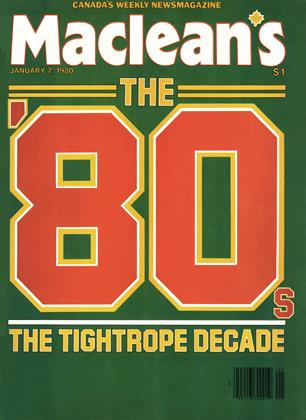