It could be the stuff of Halloween nightmares or the fevered imagination of a fiction writer determined to make Rosemary ’s Baby and The Exorcist sound as exciting as a Nancy Drew mystery. Yet the book is billed as the true account of a five-year-old girl who, in the demure mid-1950s amid the placid charm of Victoria, B.C., became the victim of unspeakable practices perpetrated by a band of serious Satanists— among them, her mother. In Michelle Remembers (Nelson Canada Ltd.), 31year-old Michelle Smith says the devil

worshippers tried to kill her in a car accident rigged to cover up a murder, then fed her the ashes of the murder victim. They held her naked in a cage slithering with snakes, burned and butchered stillborn babies and fetuses in front of her, surgically attached horns to her head and a tail to her spine—and that was just for openers. At the end of 310 pages, plucky little Michelle has seen Hell and a rhymespouting Satan (at one point, he has hairy legs and funny toenails) and finally defeats the Devil through the personal intercession of the Virgin Mary and Jesus himself.

What makes Michelle Remembers more than mildly titillating is the fact that Smith’s coauthor is 44-year-old Dr. Lawrence Pazder, a Victoria psychiatrist, who collected her horror stories in 600 hours of tape-recorded deep-therapy sessions. For their troubles, they

have already earned a $100,000 (U.S.) hard-cover advance (60,000 copies were distributed last month) and $242,000 (U.S.) for paperback rights. Even more fascinating is the involvement of the Roman Catholic Church. Father Guy Merveille, now living in Seattle, accompanied Smith and Pazder on a trip to Rome in 1978 to lobby for a church hearing of her case, which he says is being considered by Bishop Remi De Roo of the Victoria diocese. The bishop has been accurately quoted in the book as saying: “It may well be that for people today to hear this message coming from a five-year-old child is of particular significance.”

But last week, while patient and doctor were in Seattle at the end of a month-long 30,000-km promotion tour around the U.S., Smith’s relatives and family friends were surfacing to question key facts and reveal interesting omissions in her story. Her mother died of cancer in 1964, but her estranged father (who prefers to remain anonymous, as he is in the book) denies that his wife was ever involved in anything satanic and told Maclean's: “I can re-

fute the whole bloody thing right down the line.” Diane Lockyer, a doctor’s wife whose daughter befriended Michelle when she was 9, described the girl’s mother as a woman “whose whole life was for her children and nothing else. You couldn’t have a nicer, more charming person ... and this is something that has upset Tertia, Michelle’s sister, because nobody seems to have brought that forth.”

The book not only fails to point out that the children adored their mother, as Lockyer puts it, but it also doesn’t mention that Michelle has two sisters— Tertia, older than Michelle, and Charyl, younger—facts that, if included, would have left a reader wondering how the mother kept her other two daughters ignorant of the tortures her supposedly devilish colleagues were inflicting on Michelle during three months in 1954 and 1955. Nor is there any acknowledgment that both Dr. Pazder, a Polish Catholic, and Michelle Smith, who was baptized a Catholic during her psychiatric sessions, have since divorced their spouses, a step frowned upon by their church and one that seems at odds

with their book’s celebration of the Catholic version of holiness.

Pazder, a graduate of the University of Alberta and McGill, first treated psychology student Michelle Smith for depression in 1973. Three years later she returned to his private practice after her third miscarriage to report a dream about tiny spiders streaming from the skin of one hand. In a later session, the book says, she screamed for 25 minutes before beginning a 14-month gusher of Gothic images uttered in a five-yearold’s voice. Her story starts in 1954 when she claims to have been at a Satanists’ orgy in Victoria where she grabbed a bottle to hit “a lump” under her mother’s skirt. The “lump” turned out to be a woman, who was then clubbed to death under the fists of the other participants. A malevolent man nicknamed Malachi put the dead woman in a car with Michelle in the back seat and sent it rolling down a mountain road, but somehow the girl survived the flaming crash. (A relative recalls that Michelle drove up the same highway with her family when she was about 5 and saw a woman lying in the road after a traffic accident—a sight that made Michelle hysterical.)

The story heats up with the Satanists deciding to steep the girl in evil for an encounter with the Devil when he appears for his Feast of the Beast in 1955. Her mother gives her away to another woman who makes her defecate on the Bible and entombs her in a grave before Michelle is imprisoned in a spiderridden effigy of the Devil, has the horns and tail sewn on her and witnesses kittens being killed and corpses cut up. Through it all, this five-year-old instinctively knows that the Bible and the crucifix are her weapons.

A fiery Satan arrives for his Black Mass where a man is slaughtered and Michelle sees Hell: “There’s people with no eyes, and they’re bleeding from their eyes, there’s people that’s got no noses.” But just in time she is visited by the Virgin Mary and her Son, who reassure Michelle that she’s strong enough to survive. And in typically terrible doggerel the Devil tells his followers: “It’s your mistake, you’ll have to pay. I give her back. You can’t give her away.”

Michelle is allowed to go home with her mother and she forgets everything she has seen—until 22 years later when she remembers it all for Dr. Larry Pazder and they decide to write a book, about which even their U.S. publishers, Congdon and Latté Inc., admit: “There are a lot of skeptical people, as well there probably should be.” Lately the coauthors have been considering the possibility of a film version, with Dustin Hoffman their choice for Pazder. There’s no question that it would make one hell of a movie. Paul Grescoe 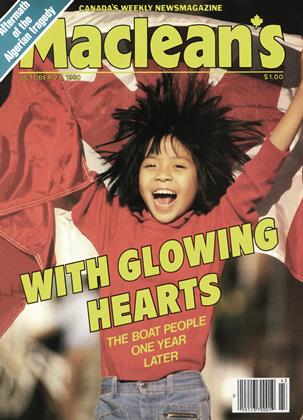