The dark figure of a man flashes briefly onto the screen. “Ever since I came to this country I’ve been waiting for all-night TV,” he says in a heavy Portuguese accent. The scene is from a commercial for Toronto’s first all-night TV program which was launched in September. And it is only appropriate that the man has an accent. After all, this is Channel 47, Multilingual TV—the station that got its licence in 1978 on the promise of serving Toron-

to’s many ethnic communities. But the accent in the ad is about as far as the ethnic content goes in the all-night show. It’s four hours of old American reruns, mixed in with comedy and variety-all in English.

yearn to plop down in front of a TV show every night. He’s so convinced that he is plowing $1.2 million of the station’s scarce resources into developing a show for them. But some ethnic groups wonder whether the money wouldn’t be better spent improving the lacklustre quality of the station’s foreign-language programs, which the Canadian Radiotelevision and Telecommunications Commission (CRTC) stipulates must make up 63 per cent of the station’s day and evening programming (shows from midnight to 6 a.m. are exempt). Iannuzzi counters that his ethnic shows, which mostly feature church-basementquality entertainment produced on shoestring budgets, will improve with time. “TV is like wine,” he says. “You can’t rush it.”

Some ethnic minorities, however,

would like to see Iannuzzi push it just a bit faster. While they are pleased to have programming in their own language—Channel 47 broadcasts in more dhan 30—many say the station provides little of the kind of information immigrants need to get by in Canada—like how to deal with the Workmen’s Compensation Board, how to claim tax credits and how to find services they need in the city. “And social issues in the community are ignored—like battered wives and child abuse,” says Enver Garda, executive director of Indian Immigrant Aid. Garda says there are thou-

sands of women from India who speak no English and are stuck in their homes all day without TV programming that could help them adjust to their new lives. Willy Cheng, general manager of Shing Wah Daily News, says that in his opinion Channel 47 is neither educational nor entertaining. “It’s mostly just two people talking on a screen. And that’s dull.” Portuguese-speaking Marde Ponti, who works for a group called Women Working With Immigrant Women, says programs provide little background in Canadian news and politics. Ponti is angry that Channel 47 sells

17Vi hours of airtime per week to American evangelists Jim Bakker and Pat Robertson, who solicit funds for their multimillion-dollar enterprises over the air. “This shows no respect for the fact that immigrants have their own religion,” she says. “Why should they be urged to send money to these guys?”

With an ethnic population of 2.4 million in its 150-km viewing area, Channel 47 should turn out to be a lucrative plum for 46-year-old Iannuzzi, who got his start running Toronto’s first Italian daily newspaper. The CRTC awarded Iannuzzi the multilingual licence—considered the richest prize left in TV— after a hotly contested three-year battle between him and two other prominent ethnic media figures, CHIN multilingual radio-station owner Johnny Lombardi and Leon Kossar, who runs the multicultural festival, Metro Caravan. Iannuzzi says he and his backers have gone into debt to get the station started but he expects to turn a profit by 1982-83. “Annual growth has been well ahead of industry norms,” he says in a slick promotional brochure. Things should get even better this winter with the introduction of satellite TV, which will allow Iannuzzi to reach ethnic markets across Canada, enabling him to increase his ad rates with very little increase in production costs. He hopes as well to expand into the lucrative non-ethnic special-interest markets opened up by satellite TV transmission-providing, for instance, a program in English aimed at squash players. “Television is expensive,” he says. “But once we get going, the cash should flow.”

One reason the financial picture looks good may be Iannuzzi’s knack for keeping costs low. Many of the programs are put together by one person who single-handedly researches, produces and hosts the show, in addition to selling a number of ads. These “associate producers” are paid only according to the number of ads that appear on their shows, and some find that after working 50 to 60 hours a week they end up with little more than the minimum wage. “I don’t blame the producers for the poor programming,” says Naldi Nomez, a Chilean who works for the Cross Cultural Communications Centre. “They don’t have the time or the resources to do any better.”

Most immigrants are reserving judgment on the all-night show until they see if the profits are funnelled back into ethnic programming—as Iannuzzi promises. Otherwise, some see the station’s move as a way of increasing profits while ignoring its responsibility to the community it is supposed to serve. Comments Ponti: “That would be taking advantage of immigrants.” 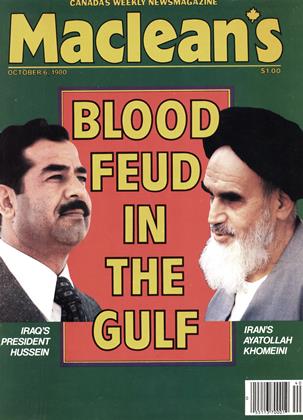