Having pre-taped the television address, Peter Lougheed re-

tires to his Calgary apartment to watch himself deliver an ultimatum to Pierre Trudeau: a new energy deal or an oil cutback. In Ottawa, meanwhile, the prime minister goes out to a posh dinner at the National Arts Centre to mark the 10th anniversary of the International Development Research Centre. By coincidence, the host, Ivan Head, is a onetime campus political foe of Lougheed’s from Alberta and a former ad-

viser to Trudeau. The word “Alberta” does not pass Trudeau’s lips, although he smirks when Head introduces a promotional film on the aid agency, assuring his old boss that he is not about to see the premier of Alberta. The title of the performance is Choices.

Domestic options were uppermost in Lougheed’s mind as he appeared last week before a province-wide audience— and a gaggle of Opposition MPs, oil lobbyists and reporters watching a closedcircuit CBC feed in Ottawa’s national press theatre.* “Who,” the premier asked rhetorically, “will ultimately decide? It won’t be Peter or Pierre—it will be you, as Albertans.” The disclaimer barely concealed the bald nature of the real choice between two conflicting, intensely held personal views of how the country should develop; and between

two proud, determined men with a score to settle and their place in history to secure.

Trudeau’s view came Tuesday, when Finance Minister Allan MacEachen’s first budget laid out a tough plan for a radical restructuring of the oil and gas industry, which makes Alberta flourish (see page 32). The National Energy Program, a document that packed more punch than the budget, set a stark stage: “In Canada, one provincial government—not all, and not the national government—enjoys most of the windfalls, under current policies. These policies are no longer compatible with the national interest.”

For Lougheed, the scheme amounted to nothing less than “an outright attempt to take over the resources of this province.” Although he was a vision of cool, collected blue on camera,

Lougheed figuratively curled his lip when he stated: “The Ottawa government — without negotiation and without agreement—simply walked into our homes and occupied the living room.” To fight back, Lougheed spent four hours taping (see box, page 31) and conjuring up visions of cold eastern nights. He announced a cutback of up to 180,000 barrels per day in oil, starting in stages on Feb. 1; a delay in approval for two oil sands plants which could each produce 140,000 barrels per day by 1987; and a

court challenge of a federal tax on natural gas. Lougheed said that, as “a fundamental condition,” the production cutback would be rescinded if oil shortages develop in Canada or if Ottawa agrees to “a new and fair arrangement.” Lougheed’s statement stopped short of a full declaration of war, resembling as it did a minimum ante for a long campaign. By phasing in three separate cuts of 60,000 barrels per day every three months, and starting only in February, supplies would not be affected this winter; the complete impact of the threatened 180,000 barrels per day total cut—15 per cent of Alberta production and roughly 10 per cent of national consumption—would not be felt for a full year. Lougheed also dispatched one of his most trusted advisers, Wayne Minion, chairman of the Alberta Petroleum Marketing Commission, to ensure that Ottawa could buy 180,000 barrels per day in the world market. “He’s

*Senior officials, including Justice lawyers, watched on a separate hookup in the office of Trudeau 's press secretary, Patrick Gossage.

given everybody a lot of time,” concludes one senior federal official.

Caution was the keynote in Ottawa, where Trudeau said in a palpably subdued Commons that “this breathing space” provides the time for “future negotiations,” which the PM offered to undertake personally with Lougheed. Another reason for the calm—apart from splits in Conservative and NDP ranks—was Ottawa’s recognition that the stakes are enormous and crucial. For all the moderation in the tone, Lougheed’s action essentially challenges the very notion of how the nation works—by talk and compromise. In gross-dollar terms alone, the difference between what Alberta wants for oil and gas and what Ottawa is offering is $18 billion—roughly the cost of two oil sands plants. “We are very far apart,” notes one well-placed federal realist. “We’ve gone as far as we think we can go.”

Failing agreement, a chilling scenario of escalating countermeasures lies ahead. Trudeau, for example, did not rule out tackling Alberta in the courts where, in the past, Ottawa has won cases challenging the use of special powers over the economy. Ottawa also has constitutional clubs to take over oil wells “for the general advantage of Canada” and to disallow provincial legislation. At the start of last week, Calgary MP Harvie Andre told CTV’s Question Period that “we’re at the handgun stage” and gave voice to the threat that “at some point you will be in a position where the only way the federal government’s actions could be enforced is with the military.”

In the West, the mood is mean and hawkish. As Lougheed spoke last week, for example, up to 40 shoppers crowded around 13 television sets in Woodward’s downtown Edmonton department store, some applauding, in a scene reminiscent of the Cuban missile crisis. Alberta Senator Ernest Manning warned the sombre chamber that westerners “are now joining or supporting” separatist organizations “not by hundreds, but by thousands.” One such group, Westfed Association of Alberta, attracted 600 people to a September meeting in Red Deer and last week took out half-page ads in the two Calgary dailies. Carl Nickle, respected Calgary establishmentarian and director of Canada Trust, told Maclean's'. “Separatism, if it becomes necessary, is better than grovelling to Ottawa.”

Interestingly, the feds portrayed themselves as the grovellers on budget night by underlining the fact that they had not imposed a gas export tax—it

was removed a month ago in an attempt to placate Lougheed and B.C. Premier Bill Bennett. While Lougheed was unmoved because of the levy on all natural gas, Bennett at least resorted to the unusual practice of deferring budget comment until this week—perhaps, in part, because Ottawa plans to subsidize gas

pipeline extensions to Vancouver Island (as well as to Halifax) and to establish a $4-billion “fund” for western development.

The budget, in fact, was notable for many things it didn't do. Apart from failing to offer any relief from inflation, which is to continue at double-digit rates, there was no move to eliminate the popular indexing of personal income tax exemptions or home ownership savings (RHOSP); no limits on registered retirement savings (RRSP) and no increase in personal taxes. The wily MacEachen, in fact, emerged as Mandrake of the magus. For months he and his handlers helped to fuel speculation of dire measures, and the seduction produced a series of pre-budget scare stories, notably in the Toronto Globe and Mail, which published a post-budget news article that effectively “blamed” the paper’s sources.

All the while, MacEachen managed to bring this year’s oil price per barrel in 20 cents below the $4 proposed by the Conservatives last year, although a socalled “blended” scheme will double the price in four years and quadruple it by the end of the decade—roughly what Joe Clark had in mind. Along with increases in excise taxes on cigarettes and liquor, NDP leader Ed Broadbent estimates that the average Canadian family will be forced to shell out $500 more in 1981.

For many hard-pressed citizens, the escalating rumbles between Edmonton and Ottawa may prove to be something of a diversion. The disturbing thought is that it really doesn’t need to be like that at all. At times, given Lougheed’s paranoia—his speech last week conveniently anticipated draconian reaction from Ottawa which has not yet come—and Trudeau’s indecent haste to push constitutional reform and to minimize the rage in the West, the point is lost that among civilized leaders there is a straight deal to be cobbled. Private surveys done by Toronto pollster Allan Gregg’s Décima Research, in fact, suggest that folks may be in the mood to see their leaders solve problems rather than make them worse. Fully 76 per cent of the 1,500 persons sampled last month said that the constitution has little or no effect on their personal lives; more than 70 per cent of Albertans feel the province should share its wealth if it gets a fair deal. Just perhaps, Pierre and Peter should be put on ice.

With files from Thomas Hopkins in Vancouver, Suzanne Zwarun in Calgary, Wayne Skene in Edmonton, Dale Eisler in Regina, Ian Anderson and John Hay in Ottawa, Sue Calhoun in Halifax and Geoff Hunt in St. John's. 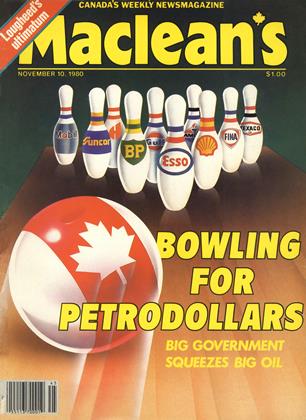