Alex Karras, the footballer-turned-actor, used to tell a story on the talk-show circuit. The punch line arrived after a long and graphic description of 300-lb. linemen ripping and tearing at each other’s bodies for hours, covering themselves with mud, blood and bruises. On the fourth down, with the game in the balance, a little Hungarian would prance onto the field, uniform sparkling and shoes shiny, shrieking: “I goink to keek a touchdown.” These days, in major arenas in Canada and the U.S., sports fans can watch whole teams of Europeans in short pants, running and shrieking: “I’m going to keek a slapshot.”

The North American Soccer League (NASL) has gone year-round by moving indoors, in a massive, final blitz to sell their game to the North American sporting crowd. Last year, they tried it with 10 teams, all in the U.S. This year they have gone to 19 teams including for the first time four Canadian franchises: Toronto Blizzard, Vancouver Whitecaps, Edmonton Drillers and Calgary Boomers. To this point these new teams have been restricted to playing against each other as a result of dispute between the league and the players’ association that has caused foreign players to be barred from the U.S.

The Canadian teams have some advantages over their U.S. counterparts. They don’t have to compete with too many other professional sports—football and basketball—during the indoor season. And the one pro sport they do compete with, hockey, is suspiciously similar to this latest soccer hybrid, with substitutions, penalties, power plays, shots and players rebounding off the boards. But, as the NASL points out, its game has a lot more scoring.

“What we’ve done is strip away the padding, take up the ice and give them a bloody great puck to play with,” says Clive Toye, Blizzard president. “For me, as a soccer conservative, a soccer purist, if you will, I find it an immensely excit-

ing entertainment.” But is it soccer?

“I don’t know what it is,” admits Peter Pocklington, owner of the Edmonton Drillers. “But six guys on each side kicking the hell out of a ball seems to create a lot of excitement.”

Some of the excitement has come from the early confusion of the players and coaches. Blizzard Coach Keith Eddy, for one, has recruited former hockey player and coach Red Kelly to teach the basics of line-changing and use of the boards. Says Eddy: “I’ve gone from being very skeptical to enjoying it very much. Having the crowd so close is something new for the players, something we appreciate. Playing in an arena can create the same atmosphere as playing in a full stadium in places like Manchester and Liverpool.”

Selling the indoor game as carpet hockey seems to be working in all the Canadian cities but Vancouver. While Toronto, Edmonton and Calgary are getting small but respectable crowds, averaging about 6,000 a game so far, the Whitecaps have attracted just over

2.000 fans to each of their first two home games in the 15,000-seat Pacific Coliseum. Part of the reason, says one team official, is the early success of the National Hockey League Canucks. “This is the time of year when people think about hockey,” Gord Couling, public relations and creative services manager of the Whitecaps, said, “and we haven’t yet been able to break that pattern.” To drum up interest, the Whitecaps have scheduled a series of promotions—a halftime Christmas party, a post-game “sock hop”—and have cut ticket prices from a $9 top price to $5 a seat (Toronto has a $10 top ticket).

None of the NASL teams expect to make money from the indoor season. Not surprising, since none made money from the outdoor season either. They see it, however, as part of a bigger gamble. “I think it’s a great investment,” says Pocklington. “Sure, holding on hurts. But who’s making money in sports in Canada? The NHL lost money last year; you don’t see the CFL making money, do you? Right now, there are

14.000 kids in organized soccer in Edmonton. These are our fans, our future. It will come.”

Late last week, the NASL players’ association and the league reached a tentative contract agreement. When ratified, Canadian teams will at last be able to travel to U.S. cities. But this agreement initially could work against the Canadians, most of whom hoped the 18game schedule forced on them—with each Canadian team playing the three others six times—would cement rivalries and raise profiles. In any case it’s unlikely fans will know, much less care, which European from which city “keeks” a slaphsot. 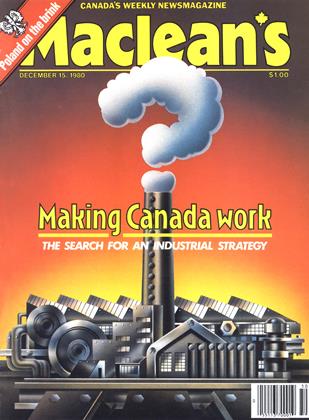