It had all the trappings, but failed to live up to the full imagery of a “state funeral.” There were few tears, save what a savage wind off the Ottawa River could extract, and the streets were almost without mourners as the cortege moved down Parliament Hill toward Nôtre Dame Basilica. Jules Léger, the 21st governor-general of Canada, might have been amused. His funeral, without the television cameras and cardinals, could have been much like those that take place every day in this country—just the way he would have wished.

“Everyone here is a friend of the deceased,” Archbishop Joseph-Aurèle Plourde said in his simple homily to the gathering. It wasn’t necessary to have touched to have felt. The diplomatic corps could appreciate Léger’s service as ambassador to Mexico, Italy, Belgium and Luxembourg, NATO and, particularly, to France during the delicate time of Charles de Gaulle’s VIVE LE QUEBEC LIBRE call. The mandarins sitting above and to the right of the simple flag-draped casket would know of Léger’s dedicated work in the department of external affairs. There were those who remembered him as the brilliant scholar, the young journalist, the professor. And there was the family, thinking mainly of the good-humored husband, father and grandfather who was far less interested in ceremonial braid than in making sure 100 children from the Ottawa Boys’ and Girls’ Club sat down with him each year for Christmas dinner.

“Slight was their affliction,” former Ontario lieutenant-governor Pauline McGibbon read from the Book of Wisdom, “great will their blessings be.” But Jules Léger’s affliction was far from slight. He was appointed in 1974, and the first six months of his stewardship were full of promise—he was a visible, likable and articulate governor-general who could toboggan with Princess Anne or blast newspaper publishers for dwelling on bad news—but his first severe stroke meant that though he would survive, the promise would not. Backed by a tough, witty wife, Gaby, he rebuffed Pierre Trudeau’s gentle prod toward resignation and, instead, turned the office into a husband-wife partnership. It often worked—but that was the era of the Parti Québécois victory; a silent symbol was at times unfortunate when ears turned anxiously for the voice of reason.

The best governors-general leave legacies—from Lord Stanley’s Cup to Lord Durham’s report—and Jules Léger’s greatest service was an inspiration to the afflicted. He took speech therapy daily, but his second language remained largely beyond the reach of what he called his “lazy” tongue. His valiant determination, however, proved that the handicapped should not be dismissed. “Life for us is more difficult,” he said, “but it is still full of wonders.”

When the wonder of life left, it was not a shock—not after the first stroke and then the second, followed by coma. If there were no tears it was for that reason, not through lack of compassion. “To me,” said Bill Brayton, a privy council clerk who did not know Léger but used his Wednesday lunch hour to give his respects, “it was a marvelous feat that he fought against this handicap.” The man Trudeau once called “the wise owl of Rideau Hall” was dead. And a simple phrase his wife gave the country on their 1979 retirement—“It was swell being with you”—was a phrase worth returning to, on this, his final, ceremony. 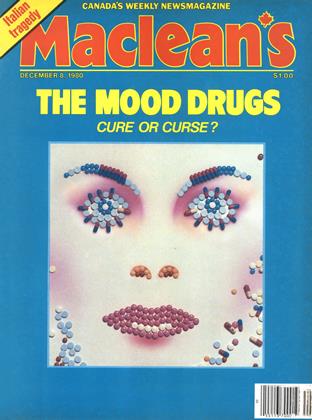