Clouds of lethal chlorine gas, 250,000 people fleeing their homes—for residents of the Toronto suburb of Mississauga, the train derailment and chemical explosion more than two months ago (Maclean's, Nov. 26) came close to disaster. For emergency planners, however, the largest evacuation ever undertaken in NorthAmerica turned out to be a valuable opportunity, a chance to test a theoretical disaster plan. Even as residents began pouring out of Mississauga last Nov. 11, investigators were rushing in to watch the evacuation plan go to work. “Since then,” says Staff Inspector Barry King of Peel Regional Police, the detachment that supervised the evacuation,“we’ve had almost 100requests for information: letters from Germany, from Israel.”

Observers of the crisis came from the Swedish Civil Defence, Ohio and California disaster planning agencies, Emergency Planning Canada and other organizations. The California planners were particularly impressed with the transfer of 448 Mississauga Hospital patients, including 10 intensive-care cases and one childbirth barely finished before the hospital was evacuated.“We’ll have to revise our ideas of the speed with which hospitals can be evacuated,” says a senior planner, Robert Hubenette. “It took half as long as our planning had indicated.” Lieutenant Yves Grenier of the Montreal police rates the operation as “A-l” in speed and efficiency. However, the Montreal group was convinced that an emergency plan should designate a political authority to co-ordinate the services, rather than assign the task to representatives of one service, such as the police. “That way you avoid possible

conflict,” says Grenier. “Such as a fire chief saying to the police—‘Hey, we don’t have to take orders from you.’ ”

As it happened, no such conflicts occurred during the Mississauga evacuation. In fact, the co-operation shown by the police forces, the solicitor-general and the mayor’s office greatly im-

pressed the U.S. government’s Emergency Management Agency, which sent a delegation to Mississauga in December. The Americans also learned from miscalculations in the Mississauga tactics. “Not anticipating how far the danger zone might extend,” says John McConnell, assistant director of the agency, “they ended up having to make a series of evacuations. We advocate removing people well beyond the affected areas. For example, we have a 10-mile evacuation zone around nuclear plants,

and a buffer zone of 10 miles beyond that.”

But despite the implied flattery, too much outside attention has its drawbacks. Handling all the groups that wanted to come, says King, would “monopolize our time. It’s easier to handle 10 groups at once than single groups on 10 occasions.” So the Mississauga authorities have turned away more recent delegations, for now, and instead have made plans to attend upcoming emergency planning conferences abroad. The remaining foreign delegations will be invited to a comprehensive disaster symposium planned for Mississauga late this summer. A seminar

package is being developed which includes eight hours of color videotape, much of it commissioned, with considerable sangfroid, by Peel police at the height of the emergency. “We’ll be trying to convey some idea of the unexpected problems we found ourselves looking at,” says King, “such as trying to evacuate an apartment building where half the people don’t speak English, or having 150 media people standing around a chemical spill and seeing the wind change.”

There may be a temporary moratorium on emergency planners going to Mississauga, but a different variety of investigators was set to descend on the city this week in equally swollen numbers. A judicial inquiry to point the finger of responsibility for the accident has drawn lawyers and technical experts from Dow Chemical of Sarnia, which manufactured the chlorine, the Montreal company that made the tanker that carried it, and CP rail which shipped it, along with the companies that leased the cars and the insurers for all parties. The inquiry’s findings will

have practical value if they find their way into promised federal legislation on the transport of dangerous cargoes. For residents of population centres across

Canada, through which such cargoes continue to roll, that would be the best result possible from the great evacuation of 1979. Fred Blazer 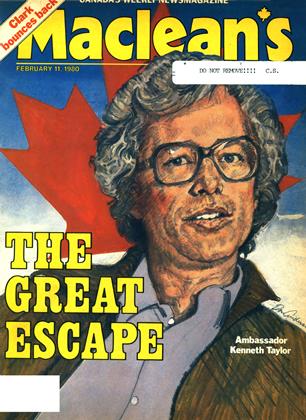