To young people who grew up in Victoria anytime from the ’20s to the ’60s, the city’s Crystal Garden was like fairyland. Designed by Victoria architects Percy Leonard James and Francis Mawson Battenbury in a style reminiscent of the great 19th-century glass-and-steel exhibition halls of Europe, the glass-vaulted Crystal Garden was enormously popular from the very first day it opened in 1925. Originally owned by Canadian Pacific Railway, it housed the largest indoor heated saltwater pool in the British Empire. In 1925, Johnny Weissmuller, “the human hydroplane,” swam 100 yards there in 51.4 seconds, setting a world record.

During its best years, from 1925 to 1950, it wás a glistening pleasure dome for courtly Victoria society. Standing in the looming shadow of the Empress Hotel, the Crystal’s great, vaulting spaces, filled with sunlight and greenery, seemed alive with music and the tinkle of teacups. The pool was bracketed by two mezzanine-level dance floors. A raised tearoom lined one side. All day

long fashionable ladies lounged on wicker settees amid potted palms and hanging flower baskets, or danced through the evening to a live orchestra. Occasionally an overheated young blade clothed in full evening dress would show his style by plunging from one of the two ballrooms into the pool.

By the 1950s the elegance was beginning to fade. The windows were grimy; the building was decaying. The CPR handed the whole 40,000-square-foot problem over to the city, which finally closed the doors in 1967. For 10 years the city fathers threatened to demolish it, but in 1977 the provincial government, nudged by the local Crystal Garden Preservation Society, stepped in with a $2-million grant for renovations.

Next week, to the delight of historical societies across the country, Crystal Garden is reopening. But the old swimming pool is gone. Its bright blue tiles are covered with soil and a lush tropical garden now grows there, watched over by delicate, wandering pink flamingos

and dazzling long-tailed macaws. However, there is dancing in one of the original glass-covered ballrooms and afternoon tea in the wicker lounge overlooking the gardens. In the old gymnasium there’s a full-scale restaurant and a new aviary, and a lizard house where the steam baths used to be. On the street level, smart shops now occupy the former shower rooms.

The future of the building now depends less on sentiment than on whether Victoria’s crucial busloads of tourists will pay the $2 admission price. “We have had complaints from the purists,” says George Giles of B.C.’s Provincial Capital Commission and the man in charge of renovations, “but we don’t look upon what we’ve done as a restoration. We’ve tried to make the building interesting for the present generation while retaining as much of the old feel as possible.” Although some old friends are worried, most are content to wait to see what kind of a face the graceful old lady will be turning toward the future. Judith Alldritt 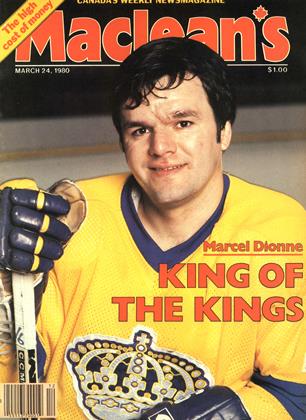