Even by the sometimes bizarre standards of the subcontinent, police actions in India in recent days have been gross. The events of March 16 were condemned by one Indian national newspaper as “brutal” and “savage,” although “beyond belief” is as accurate a description as any. Two hundred blind people shuffled up New Delhi’s Parliament Street toward the residence of Prime Minister Indira Gandhi, where they had planned to hand in a petition asking for better educational facilities and more jobs. When police stopped them, the marchers squatted down in the road, and within a minute some 100 policemen waded into the group, with their lathis— long, thick canes—crashing down on heads and bodies. Police snatched away the glasses and white sticks of the blind and hurled them onto the street. Fifty of the marchers were injured, four seriously.

Less than a week later, in the city of Gwalior, police were at it again, although this time their victims were lawyers working in the high court. The police took exception to an advocate wanting to talk to his client in the court cells and an argument broke out. Before long the lathis were at work cracking the skulls of lawyers, and some policemen even ran into the court of the judicial magistrate and beat up lawyers there. More than a dozen were taken to hospital.

Around Delhi, people are blaming Gandhi for this violence. After all, this is the sort of thing that used to happen during her 19-month emergency, isn’t it? And now that her Congress (I)—for Indira-Party has been voted back to power with an overwhelming majority by a nation yearning for another dose of authoritarian rule, it is no doubt just a small taste of what is to come, they say. They may be right.

But first it must be said that there is no evidence that Gandhi approved the latest police action in any way. In fact, she ordered a judicial inquiry into the attack on the blind marchers within hours of the incident, and at a party meeting last week she called for an investigation into the training of policemen. However, no one seriously holds out much hope that the behavior of the Indian police will improve through better training methods. Corruption and violence are too deeply ingrained for that. Even when the Janata government took power from Gandhi in 1977, determined to restore civil rights and punish those guilty of excesses, policemen continued to torture suspects as a matter of routine. Women who complained to the police that they had been robbed, assaulted, or harassed ran the risk of

being raped by the very men to whom they turned for help. In fact, the rise in cases of rape and harassment of women by police throughout India has become so serious that this month Gandhi’s government issued instructions that, except in unavoidable cases, no women should be arrested between sunset and sunrise.

But none of this is enough. Unfortunately the police are too accustomed to doing politicians’ dirty work to be much moved now by moral exhortations from governments. As Gandhi has been a star in the political firmament for longer than most of them have been in uniform, she must

accept her fair share of the blame for this shabby state of affairs.

Gandhi, talking to me at a dinner party about the excesses of her emergency, fell back on that white-bearded old political excuse: “I didn’t

know.” It is fair to accept that a prime minister or a president does run the risk of being coccooned by sycophants and fed predigested, precensored information, but not on every occasion; and not when the foreign press is carrying almost daily reports to the contrary. And certainly not now, in the early days of her latest administration.

For example, she surely knows about the action against the Indian Express newspaper-one of the few that, since her election victory, has not shifted from a critical posture to one of supine devotion. Soon after her election, the lieutenant-governor of Delhi, Jag a. Mohan, began arranging to have the Express' new building demolished, alleging that it had been sanctioned by the previous administration in total disregard of zonal regulations. The paper immediately denied the allegations, and now the matter may go to court. As a Western diplomat remarked: “If you’re going to start pulling down every building in Delhi that doesn’t conform to every last regulation, there’ll be nothing left.”

But, of course, no one is going to do that. The targets are carefully selected, perhaps not by Gandhi herself, but by her cohorts—or those of her controversial son, Sanjay, 33, now an MP and the most influential man in India. Rulers set a tone for their administration, and down the line, down to that line of policemen armed with lathis, the vibrations spread. Gandhi came to power promising tough government, authoritarian rule. Those around her are now interpreting this, converting the promise into action. If Gandhi doesn’t like what’s starting to happen around her, now is the time for her to intervene decisively. Events have a way of picking up speed, and in six months it could be too late. Peter Niesewand is Maclean 's correspondent in New Delhi. 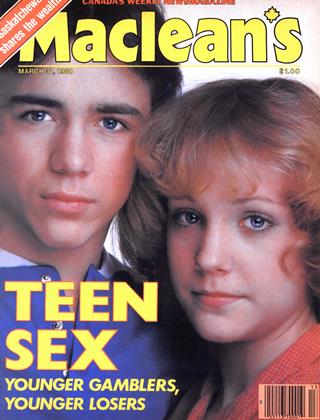