Relaxing in his spacious ranch-style home overlooking the Pacific in Los Angeles after the double triumph of the Wisconsin and Kansas primaries last week, Ronald Reagan was “happy as a clam.” “I’m still singing the same old song,” explained the 69-year-old Republican front-runner. “The difference is that America hears me now.” Such is the secret of the Great Reagan Revival. The old actor from California has found a new audience, as disgruntled, downcast Americans in their millions swing toward his doughty conservatism. His campaign chief, Ne-

vada Republican Senator Paul Laxalt, burbles: “Not since Ike’s election 30 years ago has there been such a match between a candidate’s and the public’s views.”

Laxalt may be forgiven some hyperbole. His hero is now so far out in front that the week’s big question is not can Ronnie tie up the nomination? but can he beat Carter or Kennedy in the fall? Reagan coolly collected another 48 delegates in last Tuesday’s primaries to

raise his total to 343 of 998 needed for the GOP nomination (nearest rival George Bush has a humble 72). Then California’s favorite son came home for a brief but well-earned rest.

It was Reagan at his folksiest: back in the saddle at his 700-acre $1.5-million Santa Barbara ranch, with its magnificent view of the oil rigs his administration helped deposit in the bay; at home to the press in his Pacific Palisades living room, where the piano groans beneath the weight of signed celebrity pictures. Too old at 70 for the challenges of the White House? “You reporters are the only ones who worry about that now.” Too far right to be elected in a land where Democrats outnumber Republicans 5 to 3? “I’m convinced I’m in tune with what the people want.”

Certainly the star of King's Row (he lost his legs and woke up crying: “Where’s the rest of me?”) and countless B movies seems at least as lean and vigorous as his fading rivals. This week he is off once more on the primary trail—wife Nancy, 56, in adoring attendance—with almost assured victories in view: in the Mountain states; in Texas; and, finally, in California, where he should sweep the board. If anything, as he said last week, his message has become more conservative in the years since his two terms as California’s governor. Examples: in 1967 Reagan signed a liberal abortion law. Today he says abortion is only permissible to save a mother’s life. In 1972 he came out strongly for the Equal Rights Amendment. Now he says that was a mistake.

Democrats have seized on Jerry Ford’s favorite campaign barb to exploit Reagan’s “warmonger” reputation: “Governor Reagan can’t get us into a war. President Reagan could.” But today, with Iran and Afghanistan, the jibe seems almost a plus. Americans are angry and Reagan’s sabre-rattling oneliners bring the loudest applause everywhere. In any case Reagan, says a pious aide, is perceived “more as a pragmatist than an ideologue”—i.e., conservative America loves the old pro’s hoary saloon bar gags. And it believes his bark is worse than his bite.

His record suggests there is some truth in this. As a relatively moderate governor of California, tax-cutter Reagan sponsored the biggest tax increase in state history. He talked of campus “bloodbaths” while doubling funding for the huge state college system. He railed against graduated income tax as “a creation of Karl Marx,” yet kept it going through eight years in office.

There is little reason to suppose that President Reagan, reined in by a Democrat-dominated Congress, would behave differently, as he labored to implement

those “simple solutions” that he insists exist to “complex problems.” The answers, after all, are not so different from those offered by rivals: a fat tax cut, a balanced budget, tight limits on government spending, whopping increases on defence.

At least in California, Reagan showed himself to be an able, scandal-free administrator-one with business firmly in his corner. In a survey last week by The Wall Street Journal of 50 top executives around the U.S., just three were found who warmly favored Carter over the Californian.

Nothing succeeds like success, and it may be that Reagan’s royal progress has yet to climax, one reason being that in recent years population trends in America have been steadily toward the West and the Sunbelt. That demographic shift favors a candidate who— as four western senators proclaimed after Reagan’s latest triumphs—“can free the West from the repressive land, water and energy policies of Jimmy Carter.” As Laxalt of Nevada, who played a key role in arranging their endorsement put it, “We in the West are sick and tired of «being treated like colonies.”

It seems likely, indeed, that Reagan’s cabinet would be drawn largely from the West. Since the early 1960s, the candidate has counted for ideas on Stanford University’s Hoover Institution, a conservative think tank. Many believe Hoover Director W. Glenn Campbell could become Reagan’s secretary of state. His deputy, Richard Starr, has been mentioned for defence.

Of the keenest interest, since Reagan would be the oldest president ever elected in the U.S., is the question of his running mate. Again, southerners and westerners head the vice-presidential stakes, with John Connally of Texas, Howard Baker of Tennessee and Laxalt often mentioned. Former NATO commander Alex Haig leads the list of dark horses.

Could Ronnie beat Jimmy or Teddy were the election to be held this week? Gallup says not, giving Carter a sixpoint lead. But Reagan has been regularly underestimated by the pollsters and Wisconsin has boosted his stock in a special way. It appeared to show, once and for all, that Reagan could confound conventional political wisdom and win a national election by attracting that crucial crossover vote. For the first time since the McCarthy era, Republicans in the traditionally liberal state outdrew the Democrats. Some 60 per cent of all votes cast were for the GOP. And of those, Reagan netted a full third. So the Georgians around Jimmy Carter are more worried than they will admit that Ronnie Reagan (who lost out in all those movies where he played the hero’s best friend) may get the girl at last. 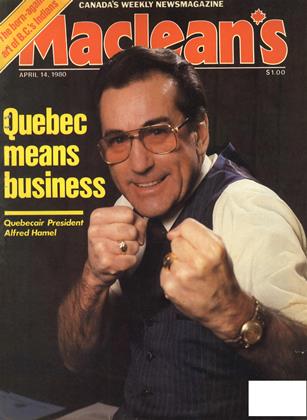