"I put animals sleep daily,” Monica Converso is saying. “From two to 11 of them. There are certain days I can’t eat. There are days I say, ‘No more, I can’t do this anymore today.’ ” Converso, 25, is supervisor of the Ontario Humane Society’s Peel branch in Mississauga, Ontario. Beside her as she talks is a 10-week-old, potbellied, black-and-white beagle-terrier mix, adopted recently by a couple because the wife was home alone during the day. A week later it was returned, simply because the woman got a job. There is nothing wrong with the dog, says Converso, but neither is there anything wrong with most of the million pets that will be destroyed this year in Canada. They’re killed, she says, for what are usually cruelly inadequate reasons: the dog isn’t housebroken; it chews furniture; it’s too much trouble to walk; or the cat leaves hair on the sofa. Small reason to die.

Although North American society spends millions of dollars on pet food, pet restaurants, pet motels, pet psychiatrists, pet makeup, jewelry and cemeteries, the reality for people such as Converso is that the average Canadian dog lives 2.5 years, the average cat only 1.8. Canada’s humane movement is failing, admits Tom Hughes, executive vice-president of the Ontario Humane Society. The killing escalates a little each year. “We’re becoming emotionally bankrupt.” However, he says, the movement is fighting back. With three years of preliminary research behind it, the most hopeful project begins its critical stage this summer—development of a birth control injection for female dogs and cats. And another major project, having some success already in Western Canada, begins next month in Ontario. It’s the ultimate pet tag—a tattoo that allows animal shelters to trace and reunite owners with stray pets.

In the meantime, says Hughes, the pet slaughter will continue to cause “a very high turnover in shelter personnel because of the emotional strain.” It also costs a lot of money—at least $1 million is spent in Ontario alone to kill, bury or incinerate unwanted animals. Most dogs are put to death by an injected overdose of drugs or by electrocution. Most cats die in a carbon dioxide chamber, where usually they lose consciousness rapidly, or by an injected drug

overdose. Although it is pet owners who force humane societies to act as executioners, it is this reluctant function of shelters that robs them of donations and heaps criticism upon them. Says Hughes: “Most people who want to get rid of an animal say, ‘Will you please find this dog a new home?’ They avoid saying, they won’t say, ‘Put it down.’ ” He tells them that the pets probably will be destroyed—for only one in four cats and only half the dogs, on average, leave a shelter alive. “Owners react differently: from tears to anger. They run the whole gamut.”

In Calgary, veterinarians have tattooed about 3,000 dogs and cats on the inside of their ear or flank, a system long used by the Canadian Kennel Club. In British Columbia, during the past four years, Operation Tattoo has left its mark on 7,000 dogs. Calgary vets tattoo drugged animals with an electric pencil or a clamp with removable letters and numbers composed of tiny needles. Ink fills the small holes in the animal’s skin, with a code revealing the clinic, year of tattoo and the animal’s own number. “We can literally get animals back to their owner within hours,” says Mary Driscoll, president of the Calgary Humane Society. Tattoos in tandem with a policy of sterilizing all pets adopted

from shelters has prompted “a phenomenal turnaround,” she says. “We’ve taken in fewer and euthanized fewer animals than in 1979.” In Vancouver, 80,000 dogs and cats were destroyed by the SPCA in 1976; in 1979, three years after their program began, only 21,000 were killed.

In Ontario, Hughes says, what will be called the Pet Register should begin in two humane society shelters in June, once the society has programmed its computer and set rules on use of anesthetics during tattooing. He hopes that within five years staff at all shelters, municipal pounds and veterinarian clinics will tattoo every animal that leaves. He also plans to try ID jewelry— a coded, permanent pierced earring for cats.

To number the pets is good, says Hughes. But to reduce their number is probably better—a first step to pet ownership as a privilege. Surgical sterilization is apparently too much trouble or money (prices vary from $20 to more than $100, depending on the city, the vet and the sex of the animal) for most owners now, he says. The dog population alone is between 2.5 and four million (despite the yearly slaughter) and growing at about four per cent a year. Vets would be swamped for years if even half the negligent pet owners had an unexpected change of heart about sterilization.

In Canada, the U.S., England, Scotland and France, researchers in universities and drug companies are seeking modern contraception for pets—do-ityourself chemical birth control. “There is every reason to believe it can be done,” says Dr. Clifford Barker, a vet and professor at the Ontario Veterinary College at the University of Guelph. He is working on a once-a-year birth control injection for female dogs and cats. Within two years he hopes to find a safe injectable substance to carry the active ingredient, a well-known gonadotropinreleasing hormone present in all mammals. A messenger from the brain, the hormone signals the pituitary to release other hormones which, in turn, activate production of eggs. Scientists have produced a slightly altered synthetic version in the lab. Injected into an animal, this messenger hormone acts as an immunization. Its changed structure triggers the body to block the hormone as alien, but also to block its own natural hormone as well—producing infertility. Barker is also considering development of a male-pet contraceptive.

It could be five or even 10 years before the injection comes on the market. Barker says that owners will be able to inject their own animals—a simple procedure—or that vets may, by then, give a combination rabies-birth control shot. Barker’s research (partially funded by the Ontario Humane Society and the Animal Welfare Foundation of Canada) could cost up to $300,000 and, despite the promise it shows, Tom Hughes is worried: the money will have to come from a society that’s “quite heartless and cynical. It pays lip service to our concern for old people, children and animals. But when it comes down to dollars and cents, it isn’t there.” 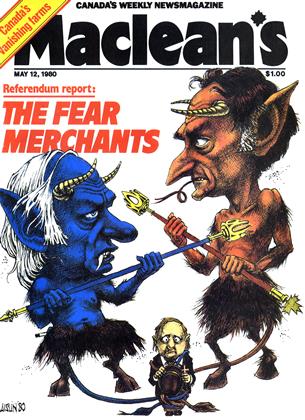