bling house into the brisk April blackness of the street. “I don’t even remember what I said in there,” exclaimed Shirley Maynes, 43. For more than 30 minutes she, a canvasser for the “non" side in the Quebec referendum, had held her own with a young, nationalistic schoolteacher supporting the “oui" side. She had not convinced him, but the doorstep encounter left her both exhilarated and unnerved. For Maynes the satisfaction and the anxiety flowed from the fact that her great debate took place entirely in French, her second language.

Waterloo (4,800 inhabitants), the town of my youth, lies close to the Vermont border, 60 miles southeast of Montreal. It is a time-warp away from the salons of Westmount, whose denizens play tennis and golf on weekends at nearby Knowlton when they aren’t golfing at Royal Montreal. The sturdy townshippers don’t sip Irish coffee by candlelight; they tend to have “supper” at 5 p.m. and to be in their jammies by 10 to prepare for a dawn start in factories and on the land. What also is different about the townships is that English and French have lived, worked and played together there, more or less harmoniously, for more than 100 years. René Lévesque’s “oui" forces are likely to find township ballot boxes less fertile than they might wish in next week’s referendum, for the residents adhere to the tradition of “the Eastern Townships man,” whom historian Dale Thomson describes in his biography of Compton-born Prime Minister Louis St. Laurent: “One who respected both cultures, took pride in the dual heritage of Canada and drew on them to enrich his own life.” In a province of polarity, tension and recrimination, the notion is almost quaint.

Until 20 years ago Waterloo was still roughly half English-speaking. Typically, bilingual francophones talked to the English in their own tongue. The town was settled at the end of the 18th century by United Empire Loyalists after the American Revolution and, later, by Scottish and Irish immigrants. The francophones moved in when the railway opened up the route to Montreal in 1861. Waterloo was incorporated on the day Confederation was formed in 1867, and today many street names are reminders of

the early anglo pioneers. The major companies are still owned by the English, but the population mix is testimony to the revenge of the cradle: English-speakers have dwindled to an estimated 10 per cent and, except for older folks, they work mainly in both languages.

Whether next week’s vote goes “oui" or “non" Shirley Maynes and her ilk have no intention of leaving Quebec, as have so many of their friends and relatives. There are roots to preserve, family nearby and a certain way of life that cannot now be established elsewhere. Says farmer AÍ Norris, who learned his French peddling milk in the town: “Where can I go? We may have some rough edges but at least, here, we fit in.”

Maynes shakes her head sadly at reports she hears of cars with Quebec licence plates having their tires slashed in Ontario, and also that some of her Ontario friends are afraid to drive into Quebec: “It’s things like that,” Shirley observes with a mixture of wonder and regret, “that really throw Quebeckers against the rest of Canada.” Yet Maynes and other anglos are not without apprehension themselves. Soaring interest rates and an uncertain economic outlook already have brought her real estate business to a standstill. Norris muses that if the “oui" forces win, “this may not be a fit place for the English to live anymore.” On one matter, however, Maynes is adamant: “I am a Quebecker as much as anyone else. Nobody here is thinking political color or Claude Ryan. Sovereignty-association is what we are fighting against.”

It is some fight. The French are the generals, with the English serving as their lieutenants. Most of the troops are women. When the “non” forces began planning their first organizational meeting in early April, they discovered that only three anglophones had signed up. They promptly recruited an English-speaker to campaign as a team with a francophone in each of the town’s 13 polls. Within 10 days the canvassers had knocked on every door and were turning in their tally sheets the day Pierre Trudeau, out of touch in Ottawa with the grassroots, was exhorting federalists to start giving Quebeckers “reasons of courage and pride” to vote “non. ”

Laurianne Gatien, Shirley Maynes’s canvass partner, is an unabashed “non” with a penchant for planting her foot in a kitchen at the first crack in the door. Their poll of 276 voters was typical of the town: in addition to families named Côté and Lévesque, Wheeler and Pinder, there was a French-speaking Cuthburt and an English-speaking Sanschagrin. The tentative findings: “non” 111, “oui” 40, undecided 59. “Oui” canvassers, meanwhile, were crisscrossing the same streets as the “nons.” Reports Yvette Dion, a “oui” co-ordinator: “I found people very aggressive. We were not well-received.”

In a town that is a legend in political apathy, the polarization of the people is a striking turnabout. When “oui” forces plastered telephone poles with their signs, Gatien called the police to enforce the ban on such displays—actually, she called her brother who is one of the town’s two cops. Francophone families have been split right down the middle. One mother tendered two Easter dinners for her large brood—one for the “ouis, ” one for the “nons. ” Offspring have become hostage to crisis. Children of all ages listen, wide-eyed, to family debates about their future. At the elementary school a teacher reportedly ripped a CANADA T-shirt off one child, and 10-year-old Sean Tracey was taunted as “un maudit anglais,” which perplexed the lad because he has gone to French school all his life.

In the heat of the debate there is little room for equivocation. Jacques Malouin, a farm equipment distributor who is voting “non,”got into such a row with his brother-in-law, a Montreal doctor, that his mother fled the table in tears. He rails that a new Quebec elite is denying his children access to English schools, while anglos flood into French classes. For Waterloo Mayor Maurice Dupuis, whose mother was a Campbell, a “non” vote is good economics: “Our property values are going to drop. When that happens, everything goes down.” Lorraine Bélanger, raised as a Spaulding, now talks English with the faint

trace of a French accent. She and her husband, André, are voting “non” to preserve a Confederation that has provided “compensation and equalization for all the provinces.”

On the other side of the great divide, a historic sense of grievance animates the“oui” voters.Yvette Dion, a descendant of proud Beauce farmers, concludes: “We are not the same. I’m clearly from a different collectivity.” The Dions—Lucien has prospered selling land and vacuum cleaners—have been members of the Parti Québécois since its foundation. Like many “ouis” in Waterloo, they are not in favor of independence for Quebec, but they want to give Lévesque a strong mandate to negotiate a better deal with the rest of Canada. “If we say “non,” the rest of Canada will laugh at us,” says Yvette. On downtown Foster Street, hardware store manager André Arès is voting “oui” “for one reason: I want to live in French.” He wants to give Lévesque a

big mandate, but admits he may then vote for Claude Ryan’s Liberals. Longremembered hurt lends passion to his voice when he says: “I’ve been pushed around by the English”—especially by Montreal paint and equipment suppliers who took his orders over the telephone in English for years.

For many Waterloo voters, Irving Slack is the symbol of anglo dominance of Quebec industry. Yet he is an informal, unassuming bilingual boss who presides over the family mushroomgrowing business and its work force of 300, now overwhelmingly French. Slack considers himself “a real Québécois” and, brimming with impatience at the dim-wittedness about Quebec in English Canada, he asserts: “I wouldn’t be the least surprised if it’s a ‘yes’ vote. It’s about time the rest of Canada got a shock.”

The intensified heat in the kitchens of Waterloo has also reawakened oncecontented anglos to their own roots. At least 4,000 of the estimated 50,000 English in the surrounding counties have signed up as members of Townshippers Inc., a kind of survival lobby formed last year in the wake of a meeting with Quebec Minister of Culture Camille Laurin. Apart from preserving their language, traditions and jobs, the Townshippers are out to promote expanded teaching of French to English children. The organization has received a $60,000 grant from the federal government and gets moral support from Max Yalden, commissioner of official languages. But it steadfastly resists joining up with political parties in the “wow’’camp. “If we did something like that,” explains President Dick Stoddart, “we could end up as an English version of the St. Jean Baptiste Society. We don’t need that in the townships. Here, we work together.’ O 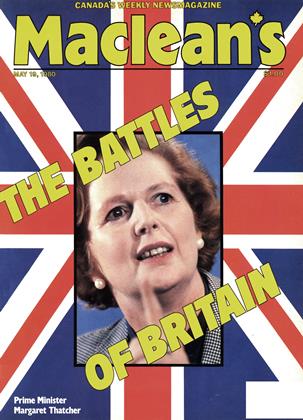