A smiling savior for the stressed Val Ross May 5 1980

Like a small, ancient medal in a maroon case, lab-coated Dr. Hans Selye sits enveloped in a huge swivel chair in his Université de Montréal office and, at 73, he can smile back over a lifetime of achievement. A gnome-like man of considerable charm, he loves to win new and admiring friends, and takes obvious delight in showing off the trophies, mementoes and medals— 137 so far—that his medical research has won him from around the globe. Selye has been called “a medical Einstein” but Newton might have been more appropriate. The apple of Selye's insight-into-

the-obvious hit him back in 1925 when, as an 18-year-old medical student in Prague, he asked himself, “Why are sick people so alike? Is that a syndrome of simply being sick?”

He came to North America in 1930, on a Rockefeller grant in search of an answer; by 1932 he was in Montreal and hard at

work, first at McGill, later at the Université de Montréal. Rats, he discovered, developed similar gastrointestinal ulcers and glandular disorders, whatever different toxins, extremes of cold or heat, or other disasters he exposed them to. Stress is the rate of wear and tear on an organism: Selye labelled the rats’ similar reaction to stress the “General Adaptation Syndrome,” and his GAS is the common experience of ß\\ organisms under stress,from rats to marathon runners.

The first stage of the syndrome is the setting off of an alarm reaction; the racing

heart and sudden, tensed energy enables the rat to scurry to safety, empowers the marathon runner to win. The second stage is endurance, the stamina to run, the physical energy to resist; finally, in the third stage, comes exhaustion. Without the glandular boosters of the GAS there would be no feats of flight or strength—hence Se-

lye's contention that stress can be productive.

Having confirmed his place in the medical pantheon, Selye has in the past two decades turned to writing, lecturing and spreading the good news of stress’s constructive powers. He has, he believes, translated his medical insights into a code of human behavior or, as he modestly puts it, “given scientific basis to the teachings of Jesus Christ.” Earn thy neighbor’s love, he exhorts.

Looking over the man's schedule, one wonders if he hasn’t an obsession with accumulating more. He gave 108 lectures last year and this year will be as busy; workshops from Montreal to Monte Carlo, talks from Toronto to Tokyo; seminars throughout the United States. Selye has authored 2,000 articles, 38 books and has become something of a property, without whose imprimatur or foreword no stress book, course or gadget can sell well. He’s slightly distressed by the “weeds in the garden” of stress management and is becoming warier about what he’s associated with. When he chooses to speak, his fee is $5,000, which he donates to the International Institute of Stress. For himself, he only insists on travelling first class.

What’s in this exhausting life for Hans Selye? “I like people to come up to me and say, 'You saved my life. I was going to commit suicide until I read your book.’ ” 3 Not a modest goal, but if anyone feels fulE filled, it’s Selye. He has beaten cancer, is wrestling with old age through a vigorous x program of exercise and swimming, and glows with the hope of helping humanity

If his voice is starting to fade to a hoarse whisper, he apologizes to his interviewer, it’s because he has been up and working since 4 a.m. He is living proof that people can thrive on stress-and that fame, international recognition and admiration help. 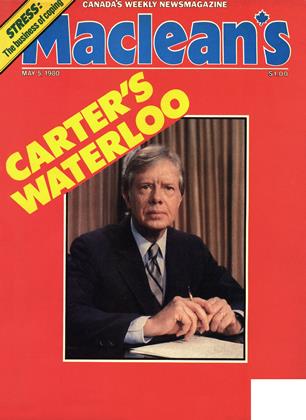