Abandoned by her live-in lover, turfed out of her fire-escape flat and faced with the death of her closest relative while celebrating an impoverished 30th birthday, Cheryl Cashman nevertheless developed a knack for turning the accumulated negatives of her life into positives—she created Turning Thirty. Written on an Alert Bay Kwakiutl Indian reserve, the onewoman show is peopled by, among others, a spaced-out flower child caught in a Vancouver time warp; a mad academic intent on creating a Royal Flush by blowing up Queen Elizabeth’s loo at the Edmonton Games; a masturbating rural Quebec nun who has a habit of removing her habit to the music from a radio hidden in her cassock; and Cashman as her own vulnerable self. A National Arts Centre performance left media luminary Patrick Watson with a sense of “reassurance and tranquillity” about his own death and, in fact, he was so impressed that he is writing a screenplay based on the show.

Anita Bryant Ministries is a centre for “spreading the word about preserving the traditional American family,” says its founder, but the word last week was that Miss Bryant was filing for divorce from ex-deejay husband Bob Green, also her manager. The 1959 Miss America runner-up says she was so conservative when she married Green at the age of 20 that she was shocked when he first held her hand in public. The lady the gay community loves to hate says the marriage is “irretrievably broken,” but no reasons are cited in the divorce petition—which does state that she is “without sufficient funds” to support their four children. So practical Anita wants Green to pay child support and hand over their 22-room Miami Beach mansion. Apparently money doesn’t grow on orange trees the way it used to.

Most Western journalists have been sitting out the Afghanistan war in Pakistan, but Arthur Kent, 26, whose big brother, Peter, 36, has seen close-ups of some of the world’s hot spots, couldn’t see himself sitting it out in Calgary. So last winter he headed for the Kunar Valley to make a documentary on the war. A former CBC correspondent for The National, Kent was smuggled into Afghanistan by guerrillas and travelled with them for five weeks—discovering that things aren’t what they’re reported to be. “There’s no evidence of chemical warfare, no scorched-earth policy,” says Kent. “The Russians are fighting a very conventional war.” Despite the “pulverized villages” of the valley, Kent

thinks the Soviets are stalemated, unable to push north into terrain that could make a mountain goat dizzy. “The guerrillas own the mountains,” says Kent, appreciatively back in Calgary. “I felt much safer on their side than I would have had I gone in with the Russians.”

After five years of playing the rebellious daughter on Maude, Adrienne Barbeau, 34, will join the Bonnie and Clyde set and play “basically a gun moll” in film-maker husband John Carpenter’s next project, a futuristic action

flick called Escape From New York City. The couple have just formed their own production company, bringing together her success in skin-art posters and his flair for making successful wide-screen bloodcurdlers (Halloween, The Fog). Although in real life she lobbies for women’s rights and abortion, Barbeau has no plans to make message movies. “I’m not interested in putting my views up on screen,” she says. “I’m more interested in a commercial product.” Carpenter agrees and says one of his favorite flicks was It Came From Outer Space (in 3-D). He cheerfully admits his own movies are “devoid of significance.”

iildon’t consider film an art,” says Icary Grant, at 76 a survivor of 72 films in a profession he considers sadistic. “The only true art I know of is painting.” Grant cheerfully admits that money was one of the main primers for the performances that charm millions. “Can you think of any people who are better businessmen than actors?” asks

the pragmatic Grant, whose main focus in life these days is 14-year-old daughter Jennifer. Married four times, Grant is coy about the chances of his tying the knot again, although 29-year-old live-in love Barbara Harris is a constant companion. “Will I marry again? Who knows? I haven’t got a crystal ball,” says Grant. “I haven’t been very good at it in the past—you may have noticed.”

íílwant to convince people through ■ the written word rather than haranguing them,” says Sid Marty, poet, ex-park warden and author of Men for

Ladd (left); Marty (below left); and Heiden: the 9-to-5 mental anguish of a family man, velodrome hydraulics and the Siren song of Norway

the Mountains. After he published his 1978 book criticizing the centralization of the park-warden system (“They moved wardens out of log cabins into apartment buildings”), he says, officials “stuck me behind a desk until my attitude improved.” Marty adds: “I decided to keep my attitude and leave.” He leads a sedentary life working 9 to 5 as a writer in Banff—currently on a book of poetry called Routine Mental Anguish. “It’s about fear of everything—waking up in the morning and worrying that your wife will drop dead or that the Russians will drop a bomb,” explains

Marty. “It’s about being a family man.”£ Marty will teach a course this summer | in “mountain writing,” and muses: “I¿ can just see us all with our typewriters strapped to our backs.” °

A decade ago she was entertaining thoughts of retiring her celebrated contralto larynx. But Canada’s top diva, Maureen Forrester, says her career just “went onward and upward,” and she is still going strong as her 50th birthday approaches. She recently completed a stint with Les Grand Ballets Canadiens, which was filmed by the CBC for broadcast next season. One assignment she is anticipating with special relish is playing Bloody Mary in South Pacific for the Edmonton Opera company this September. The woman who said “all that dignified stuff is a put-on, really” is eager to belt out classics such as Happy Talk and Bali Ha'i in her first musical comedy, and in a way she is going back to her roots. “Don’t forget I started out singing popular music,” she says.

iiThank God I haven’t lost my sense I of humor,” says brainy blonde Charlie’s Angel Cheryl Ladd. “It’s the only thing that got me through,” she adds, referring to the recent trauma of her separation from her seven-year husband, David Ladd. Her emotional wounds seem to be healing nicely, however, and the new focus of attention in her life is curly-haired, six-foot, threeinch songwriter Brian Russell. The Scots-born ex-vice principal of a Toronto high school moved to Los Angeles seven years ago. Although they stoutly deny rumors of impending nuptials, and Russell is also going through a divorce, they flew into Toronto last week for a quick visit with Russell’s parents after a recent getaway idyll in Hawaii. It seems unlikely that Ladd will give up the joys of being TV’S hottest blonde for the joys of blackfly-ridden Ontario, but there are murmurs that Russell and Ladd will buy an abode in Muskoka— Charlie Farquharson’s Angel?

He is still hydraulic-pumping those 29-inch thighs around in circles, but Eric Heiden is off the ice and into the velodrome—and the five Olympic goldmedal blades have been traded in for wheels. Although he tried out for the Olympic cycling team this spring, the modest Heiden (“My medals? Oh, I guess they’re around the house somewhere”) still has to be pushed to predict that he will be a serious contender for the ’84 Olympics: “That’s a long way off.” And Heiden does have more immediate priorities—such as returning to Oslo for the dual attractions of lovely Norwegian girl-friend Cecelie and a course in sports medicine. Before heading back, he was scheduled to participate in the Lowenbrau Grand Prix cycling series beginning this week in New Jersey which treks cross-continent. Eric’s long-distance cycling inexpertise doesn’t faze him: “Oh, I j ust hope I don’t crash,” he says nonchalantly.

Five years ago, Toronto folkie Raffi Cavoukian traded coffeehouses for kindergartens and the move was a wise one, netting him two gold albums and a platinum—as well as psychic rewards. “Kids give of themselves in concert and afterwards come and show you their affection,” says the toddlers’ troubadour. “I haven’t missed adults. There are very few cynical five-year-olds.” Raffi, 31, is childless and keeps in tune with kid-cult through kindergarten-teacher wife Debl Pike.This fall Raffi plunges back into the grown-up world with an album including reggae cuts and backup by Bruce Cockburn and Rough Trade drummer Bucky Berger. But he will miss doing his nonsexist, nonviolent songs for sober, nonsmoking crowds.“It’s so healthy,” he says with a sigh. Edited by Maureen Piercy 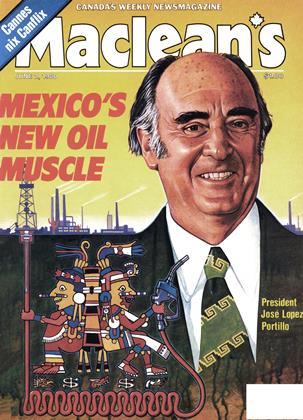