Maybe the hooch theory explains the uncertain results of the latest first ministers’ meeting on the constitution. The theory holds that the last great attempt at constitution-making—the 1971 Victoria Charter-flopped because then-premier W.A.C. Bennett pressed his fellows into a long cruise on a B.C. ferry without a drop to drink. Last week, at 24 Sussex Drive, the 11 leaders together drank less than three bottles of wine at lunch and took nothing but ice water and coffee the rest of the day. Sir John A. Macdonald wouldn’t have approved. Still, by cocktail hour Prime Minister Trudeau and the premiers had made some headway.

Once inside Trudeau’s drawing room, they didn’t take long to hit their first dispute of the day: the provinces weren’t buying Ottawa’s proposed “statement of principles for a new constitution.” Some premiers objected to having it sprung on them by Telex the Friday before; most didn’t like its language. “We, the people of Canada,” it loftily asserts, “proudly proclaim that we are, and shall always be, with the help of God, a free and self-governing people.” It then descends into long, lawyerly tedium. Complained one western official: “We’d be the only country in the world with a phrase like ‘where numbers warrant’ in the preamble of our constitution”—a reference to the condition put on the right to minoritylanguage education. As Trudeau later admitted, several premiers want concessions on the division of federal-provincial powers before committing themselves to the “fundamental freedoms” and language rights he wants in a new constitution. Quebec Premier René Lévesque had a different complaint: the declaration failed to acknowledge the “duality” of Canada or Quebec’s right of self-determination.

However abstemious the roast beef lunch, the pace improved afterward. The leaders adopted a list of 12 key items to be settled in a new constitutional arrangement. But there, too, there was a small hitch. Trudeau had split his list into a “package for the people” (again stressing freedom and language rights) and a separate “package on government powers and institutions”—the redivision of powers the provinces consider crucial. Trudeau explained that he found it “somewhat offensive” to barter federal or provincial demands against “things for the peo-

ple.” But both sides agree privately that this is exactly what the bargaining will be about: provincial power over such areas as resources or fisheries in exchange for the rights Trudeau wants entrenched in the constitution. All these issues were finally grouped in one list, fisheries added to the 11 first advanced by Ottawa. Among the others: resource ownership, “powers affecting the economy,” and inventing an upper house involving the provinces to replace the Senate. Contentious issues left for later include a formula for agreeing on amendments to a new constitution, and power over social policy—the issue that scuttled the Victoria Charter more surely than the dry cruise.

What gives those agenda items life is the work schedule also adopted by the first ministers. Starting with a ministerial organizing meeting this week, the

calendar calls for ministers and officials to gather July 7 for three weeks, break for the annual premiers’ meeting in August, then meet again before Labor Day and another first ministers’ session Sept. 8 to 12. At that meeting the leaders are “to finalize agreements arising out of work under way and to put in train a further work program.” There was much huffing in the Commons and across the country about whether that is a deadline imposed by Trudeau or a target agreed by all. Said the PM: “If we fail to reach substantial agreement in September, we will be courting disaster for Canada.” In that case, he added with Delphic ambiguity, “the federal government would have to give very serious consideration to its options and recommend to Parliament a plan of action which would allow us to fulfil our responsibilities to the people of Canada.” During the 1979 election campaign, Trudeau talked of holding a national referendum on the constitution if he and the premiers couldn’t come to terms. At this stage, knowing the premiers resent being pushed,

outside, though, he insisted that the others consent “that Quebec’s role in Canada must be described as very special.”

Lévesque is, to all appearances, commanding a post-referendum strategic retreat. Passive at federal-provincial meetings, acquiescent with their conclusions, he can finally present to Quebec voters Trudeau’s last, best offer to the province. Armed with that fresh evidence of what he could call federalism’s failure, he could fight again— either in a national referendum on the constitution or a provincial election. It’s a struggle that could consign Quebec Liberal leader Claude Ryan to irrelevance. By the weekend, Ryan was attacking Trudeau’s statement of principles for not affirming Canada’s “cultural and linguistic duality,” distancing himself both from his Ottawa co-Liberals and from the Parti Québécois.

As the premiers left Trudeau’s house last week, the prime minister had to call

he is keeping his options vague.

Can the federal and provincial governments, each grinding its own axe, reach agreement? Alberta Premier Peter Lougheed wants a deal on oil prices first. “We look at the total energy situation in the country and the respect for the existing constitution as our priority,” he says. “We’ll deal with our priorities first and then with other matters.” Then there is Lévesque. As Saskatchewan’s Allan Blakeney put it, “The remaining obstacle which is uppermost in my mind is whether or not the government of Quebec will find itself in a position to agree to any restructuring of the present constitution.” Having just waged (and lost) a referendum campaign against “renewed federalism,” can Lévesque agree to any such thing? He was, by all accounts, congenial in the closed-door meeting;

Lévesque back: he had forgotten his souvenir of the meeting, a mint set of stamps marking the first public singing 100 years ago of 0 Canada (in Quebec City). Now that the rest of the country has been provoked by Quebec’s upheaval to take a new interest in the constitution, it may be that Lévesque himself cares as little about the outcome of these talks as he does about stamps or the unofficial anthem. It’s enough to drive a politician to drink.

With files from David Thomas in Quebec City 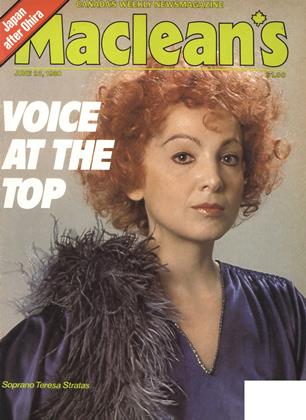